Ranson, W.Va.—Local residents rallied at the doorstep of the planned Rockwool insulation factory on May 16 to express their resolve to keep fighting the insulation manufacturer, even as walls of factory buildings rise on the construction site. Resist Rockwool, organizer of the rally, estimated that as many as 400 people attended and lined the edges of the Route 9 bike path, holding aloft protest signs and chanting, “No Toxic Rockwool!”

Twenty-four people were arrested following the rally when they obstructed the road leading to the entrance to the Rockwool site. They were charged with obstructing an officer and blocking a roadway.

Opposition to the Danish company’s mineral wool manufacturing plant has been sustained for ten months now, as residents of Jefferson County continue to object to the siting of the factory across from an elementary school and within two miles of three other schools. They point to numerous hazards and negative impacts of the facility, such as the emission of thousands of tons of air pollutants per year, the risk of ground water contamination and the loss of the area’s rural character. Proponents, on the other hand, talk up economic benefits, such as future tax revenue and at least 140 jobs created.

Blocking the roadway, an act of civil disobedience, was described by rally speakers as an escalation in tactics after pursuing many avenues of redress. Citizens have attended and commented at a multitude of hearings and city council meetings, and expressed their will through the November elections, said Mary Ann Hitt, Sierra Club campaign director and Shepherdstown resident. And Tracy Cannon of Eastern Panhandle Protectors said those willing to commit civil disobedience were there “having exhausted all other means of protesting Rockwool.”

David Levine of Shepherdstown said there was no ambiguity when it comes to Rockwool. “You’re either on the side of the people and the trees and farms, or you’re on the side of greed, coal and fracked gas,” he said.

Many speakers emphasized that resisters would not back down and would even expand their campaign. Kai Newkirk of Resist Rockwool related how a delegation of Jefferson County residents went to Denmark and met with Rockwool executives.

“We told them: We will organize, boycott and divest and use nonviolent direct action until there is a greater cost to Rockwool than leaving. I don’t think they took it seriously. I think they thought when we saw the walls go up, we’d give up. But we’re going to fight every day until Rockwool leaves,” Newkirk said. 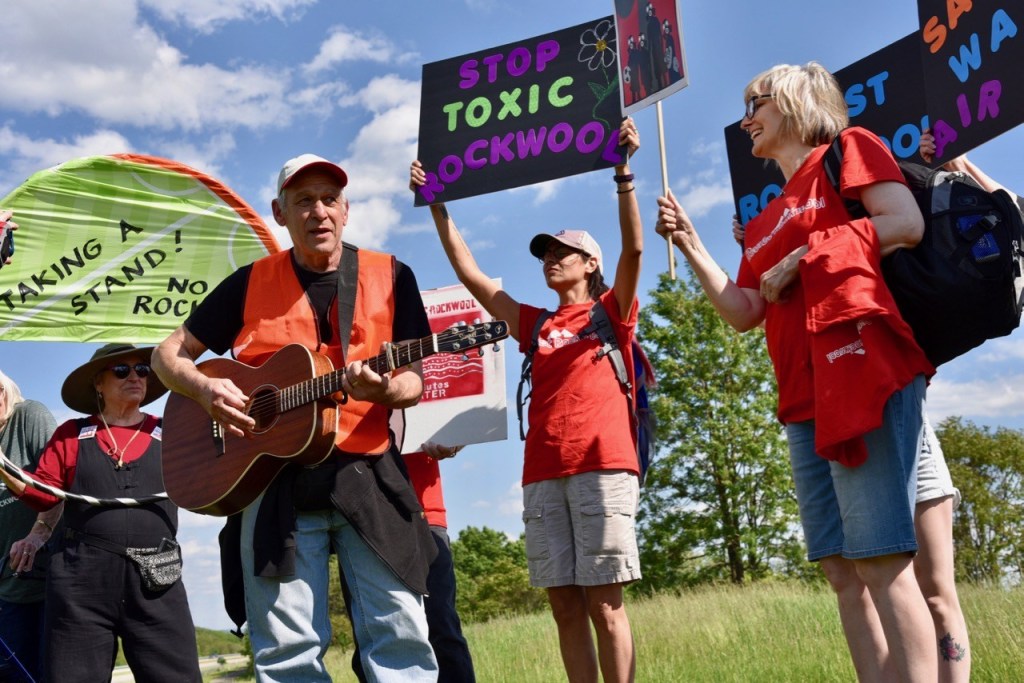 Sharon Wilt, who lives only a half mile away from the site–formerly Jefferson Orchards–mourned the change that Rockwool has already brought to the area. “We used to pick apples and look for morrell mushrooms in the orchard, it was a family tradition to go for hay rides there,” she recalled. “Now there is nothing left but dirt and concrete. They can put it in their backyard [in Denmark]. I will not back down!”

Brian Ross, who lives about a mile away from Rockwool, says it is a bad deal for everyone here. He is a descendant of several people buried at the African-American Methodist cemetery adjacent to the Rockwool site. “It hurts me to my heart to sit here and think that Rockwool come across cemeteries and dig up property that does not belong to them,” he said, referring to the gas pipeline to service Rockwool recently laid along two sides of the cemetery.

Other speakers referred to the lack of transparency in the Jefferson County Development Authority’s (JCDA’s) recruitment of Rockwool to come to the area. “We were not given a choice,” Morgan Sell, mother of two, said. “The health and safety of our children is more important than any economic endeavor. We do not consent to this factory.”

In an interview, newly appointed JCDA member Bob McEachern vowed to change things if he could. “I never want to see another Rockwool. My job is going to be to prevent something like this from ever happening [again],” he said. Pointing out that Jefferson County doesn’t even have a bowling alley or movie theater, he says wants to prioritize “quality of life” economic development with businesses that “every vibrant community has.”

On the morning following the rally and civil disobedience action, about 70 people gathered at St.Paul’s Baptist Church, located not far from the construction site, for an interfaith service. The service intentionally coincided with Store Bededag, or General Prayer Day, in Denmark, the home country of Rockwool. 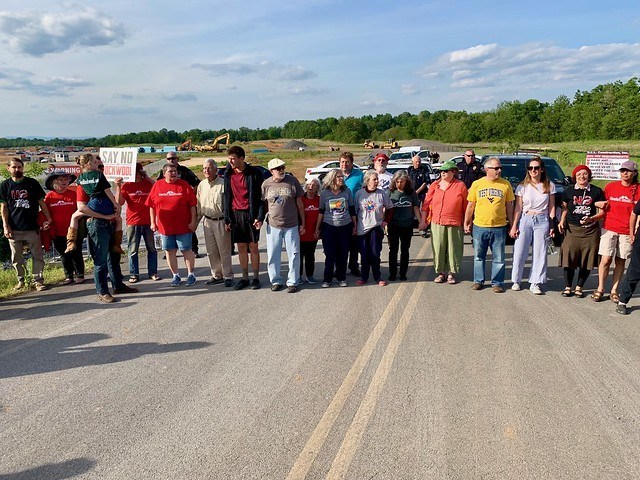