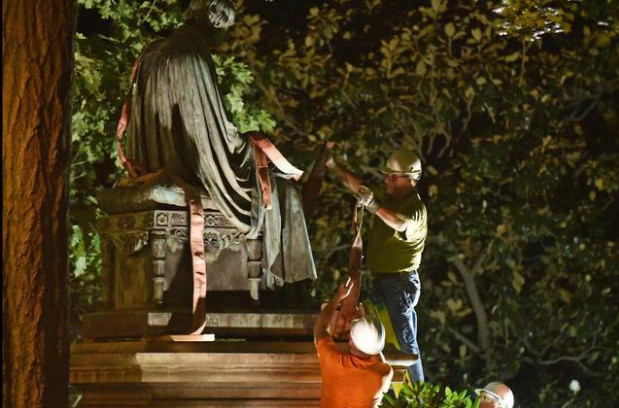 Above Photo: From baltimoresun.com

Annapolis, MD – Under the cover of night, a work crew removed the statue of former Supreme Court Chief Justice Roger B. Taney, taking down the author of the infamous Dred Scott decision from his 145-year prominent perch in Annapolis.

Cheers erupted from a few dozen onlookers as the hulking bronze statute of Taney was lifted from its pedestal on the State House front lawn just before 2 a.m., clipping tree branches on its path to a waiting truck bed. It’s the latest monument linked to the Confederate era to be removed from a public square since white nationalists rallied in Charlottesville, Va., last weekend.

State officials have been under mounting pressure to take down the Taney statue. Republican Gov. Larry Hogan reversed his stance on the matter this week. His shift provided enough votes for the four-member State House Trust on Wednesday to approve removing the monument.

Hogan’s spokesman, Doug Mayer, said the state decided to quietly and swiftly remove Taney’s statue overnight “as a matter of public safety.” The granite pedestal that supported the Taney statue since 1872 temporarily remains in place, surrounded by green plywood and guarded around the clock by two officers.

The Taney statue is considered a part of Maryland’s art collection, a status that means it will not be destroyed as long as the state owns it. It has been moved to a secure facility in Baltimore County.

Elaine Bachmann, deputy state archivist, said there were no immediate plans to relocate or publicly display the Taney statue, which commemorates the only Marylander to serve as chief justice.

Taney’s likeness on the front lawn of the Maryland State House has been controversial since it was installed because of Taney authored the 1857 Dred Scott decision that defended slavery. Taney wrote that black Americans could not be citizens and “had no rights which the white man was bound to respect.”

The decision, which historians say helped propel the nation toward civil war, has led Taney to be linked to leaders of the Confederacy. Efforts to remove his statue in Annapolis over the years have failed as key leaders argued Maryland needs to remember its history, even when flawed. But the arguments took on new urgency this week after the deadly events in Charlottesville — a rally that began in opposition to removing a Confederate statue.

As recently as Thursday, as plans were developing for the Annapolis statue’s midnight removal, Senate President Thomas Mike V. Miller wrote a letter to the governor defending the “complex history” of Taney and arguing why it should stay.

The operation comes two days after Baltimore Mayor Catherine Pugh ordered middle-of-the-night removals of four monuments in the city this week: one of Taney, another of Confederate Gens. Robert E. Lee and Stonewall Jackson, a Confederate Soldiers and Sailors monument and a Confederate Women’s monument. The Democratic mayor’s decision came a year and a half after a city panel recommended that the monuments be moved or altered to add more historical context.

The Baltimore monuments were stored under tarps in a city lot under police protection.

The Taney statue in Annapolis was under close watch by Maryland Capitol Police officers all week. In advance of the late-night removal, a team of workers inspected the statue and took measurements at midday on Thursday.

While there is not a formal price tag yet for the job, done by Whiting Turner, aides estimated the operation cost roughly $100,000.

About two-dozen onlookers gathered around the street as word spread that the statue might come down. About 1:20 a.m., sprinklers turned on, dousing onlookers and workers until the water was shut off about 15 minutes later.

Gwen Norman of Baltimore happened upon the crowd watching the removal of the statue after a night out in Annapolis with friends.

She was pleased that Baltimore had removed its Taney statue and three Confederate monuments, and felt fortunate to witness the Taney removal in Annapolis.

“It was a beautiful thing to wake up and see something so beautiful happened when I was asleep,” said Norman, 27.

“It was nice to see Annapolis get prettier tonight,” said her companion, 30-year-old Ian Wolfe of Frederick.

The haste to remove the statues came in part in response to the violence at last weekend’s rally by Neo-Nazis, the Ku Klux Klan and other white supremacists in Charlottesville. The rally turned deadly: A counter-protester was killed when a Neo-Nazi sympathizer allegedly drove his car into a crowd, and two police officers monitoring the scene died when their helicopter crashed.

Busch, an Anne Arundel County Democrat, called for the statue’s removal Monday. “It certainly doesn’t belong there,” the speaker said. “It’s the appropriate time to remove it.”

He said leaving it in place after white supremacists openly rallied “would send a message that we condone what took place, that slavery is alright.”

Hogan weighed in Tuesday, reversing his opinion against taking down the statue. In 2015, after the racially motivated mass killing at a historic black church in Charleston, S.C., Hogan said taking down Taney’s statue was “political correctness run amok.” This week, he said removing the monument was “the right thing to do.”

“While we cannot hide from our history — nor should we — the time has come to make clear the difference between properly acknowledging our past and glorifying the darkest chapters of our history,” Hogan said Tuesday in a statement.

Meanwhile, Miller’s letter to Hogan Thursday evening said the vote to take it down lacked transparency because it was held by email rather than in public.

“This was certainly a matter of such consequence that the transparency of a public meeting and public conversation should have occurred,” Miller wrote. “This was not an ordinary matter of business before the Trust.”

The State House Trust rarely meets in person, often casting votes by email for matters such as approving new plantings on the grounds or giving the go-ahead for performances in the building.

Miller, a Calvert County Democrat, acknowledged “the inflammatory and derogatory language” and the fallout of the Dred Scott decision. But he noted that Taney also “served with distinction” in a series of public offices, including as a state lawmaker, state attorney general and U.S. attorney general.

Mayer, Hogan’s spokesman, said “Miller is completely within his right to continue defending Roger Taney. We have to agree to disagree.”

Miller said the installation of a statue of late Justice Thurgood Marshall — the first African-American appointed to the high court — on the opposite side of the State House was “a very public and purposeful compromise to give balance to the State House grounds recognizing our State and our Country have a flawed history.”

President Donald J. Trump, who was criticized this week for saying blame for the Charlottesville violence was shared by both sides instead of condemning the white supremacist groups, weighed in on the removal of Confederate monuments in a series of tweets Thursday morning.

“Sad to see the history and culture of our great country being ripped apart with the removal of our beautiful statues and monuments,” the Republican president said on Twitter, a day after Baltimore removed its monuments. “You can’t change history, but you can learn from it. Robert E Lee, Stonewall Jackson — who’s next, Washington, Jefferson? So foolish!”