Role Of Youth In The Coming Transformation

Sign up for the NEW Popular Resistance School, starting on May 1. More information below.

The eruption of youth protests over gun violence in schools and other issues is another indicator that the 2020s could be a decade of transformation where people demand economic, racial and environmental justice as well as peace. Students who are in their teens now will be in their twenties then. They will have experience in how protests can change political culture.

Some view the youth awakening in these protests as reminiscent of youth movements in previous generations, others are less optimistic. We cannot predict the role this generation will play, but throughout the history of mass movements, youth have been a key factor by pushing boundaries and demanding change.

One of the slogans in the actions against gun violence is “adults failed to solve the problem.” The truth is, as many youth are aware, those currently in power have failed on many fronts, e.g. climate change, wealth disparity, racial injustice, never-ending wars and militarism, lack of health care and more. These crises are coming to a head and provide the environment for transformational changes, if we act. 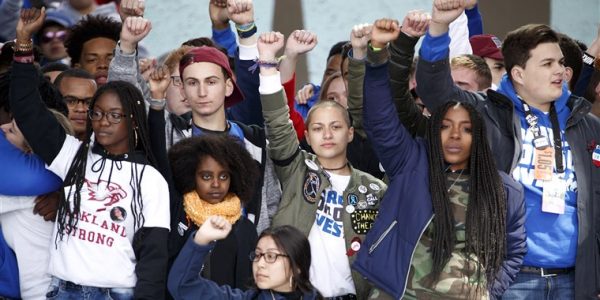 One of the challenges youth, and older, activists face is the Democratic Party. Democrats have a long history of co-opting political movements. They are present in recent mobilizations, such as the Women’s March and March for our Lives, which both centered on voting as the most important action to take.

Big Democratic Party donors, like George and Amal Clooney, provided massive resources to the March for Our Lives. The corporate media covered the students extensively, encouraged attendance at the marches and reported widely on them.

As Bruce Dixon writes, “It’s not hard to see the hand of the Democratic party behind the tens of millions in corporate contributions and free media accorded the March For Our Lives mobilization. 2018 is a midterm election year, and November is only seven months away. The Democrats urgently need some big sticks with which to beat out the vote this fall…”

Democratic politicians see the gun issue as an opportunity for the ‘Blue Wave’ they envision for 2018, even though the Democrat’s history of confronting gun violence has been dismal. When Democrats controlled Congress and the presidency, they did not challenge the culture of violence, confront the NRA or stop militarized policing that is resulting in hundreds of killings by police.

Ajamu Baraka writes, “Liberals and Democrat party connected organizations and networks have been quite adept at getting out in front of movements to pre-empt their radical potential and steer them back into the safe arms of liberal conformism.” Indeed the history of the Democratic Party since its founding as a slave-owners party has been one of absorbing political movements and weakening them.

For this new generation of activists to reach their potential, they must understand we live in a mirage democracy and cannot elect our way out of these crises. Our tasks are much larger. Violence is deeply embedded in US culture, dating to the founding of the nation when gun laws were designed for white colonizers to take land from Indigenous peoples and control black slaves.

When it comes to using the gun issue for elections, the challenge for the Democrats is “to keep the public anger high, but the discussion shallow, limited, and ahistorical,” as Bruce Dixon writes. Our task is to understand the roots of the crises we face.

Historian Roxanne Dunbar-Ortiz describes this in her new book, Loaded: A Disarming History of the Second Amendment. The culture of violence in the US goes beyond the horrific shooting in schools to the militarization of our communities and military aggression abroad. The US military has killed more than 20 million people in 37 nations since World War II.

One step you can take in your community is to find out if there is a Junior ROTC program in your local school and shut it down. 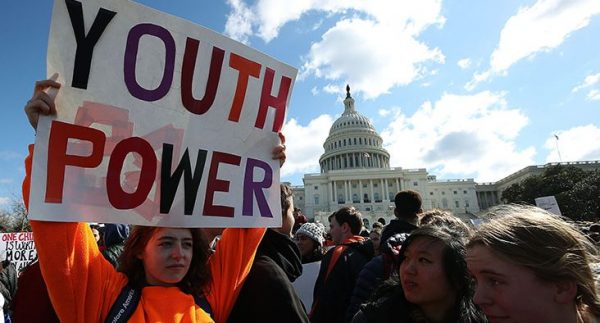 Potential for Youth to Lead in Era of Transformation

One of the reasons we predict the 2020s may be an era of transformation is because issues that have been ignored or mishandled by powerholders are becoming so extreme they can no longer be ignored. Bruce Dixon of Black Agenda Report writes the gun protests present an opportunity to highlight all the issues where Democrats (and Republicans) have failed us.

Youth are already involved, often playing leadership roles, in many fronts of struggle. Rev. Jared Sawyer, Jr. writes that when racial violence arose at the “University of Missouri in recent years, student athletes and scholars united in protest, prompting the administration to take action. Organizations like Black Youth Power 100 have arisen in the wake of police” violence against black people. Youth are on the front lines of the environmental movement, blocking pipelines and carbon infrastructure to prevent climate change. Youth are leading the movement to protect immigrants from mass deportation.

This week, Hampton students took to the streets over sexual violence, housing, food and other problems on campus. Students at Howard University started HU Resist, to “make sure that Howard University fulfills its mission.” They are in their third day of occupying the administration building.

At March for Our Lives protests, some participants saw the connections between gun violence and other issues. Tom Hall reported that those who “attended the rally had far more on their minds than gun control and the midterm elections—the issues promoted by the media and the Democratic Party. Many sought to connect the epidemic of mass shootings in American schools to broader issues, from the promotion of militarism and war, to poverty and social inequality.” Youth also talked about tax cuts for the rich, inadequate healthcare, teacher strikes, the need for jobs and a better quality of life. He noted those who attended were “searching for a political perspective,” and that, while it was not seen from the stage, opposition to war was a common concern.

Robert Koehler writes, “This emerging movement must address the whole spectrum of violence.”  He includes racist violence, military violence, mass incarceration and the “mortally sinful corporate greed and of course, the destruction of the environment and all the creatures.” What unites all of these issues, Koehler writes, is the “ability to dehumanize certain people.” Dehumanization is required to allow mass murder, whether by a single gunman or in war, as well as the economic violence that leaves people homeless and hungry, or for the violence of denying people necessary healthcare and to pay people so little they need multiple jobs to survive. 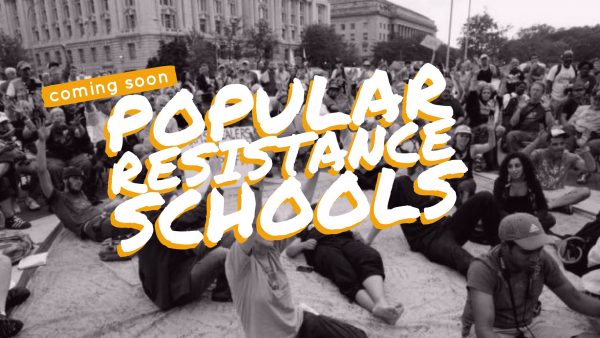 Movements are Growing, Now How Do We Win?

We have written about the stages of successful social movements and that overall the United States is in the final stage before victory. This is the era of building national consensus on solutions to the crises we face and mobilizing millions to take action in support of these solutions.

Protests have been growing in the US over the past few decades. Strong anti-globalization protests were organized under Clinton to oppose the World Trade Organization. Under the Bush administration, hundreds of thousands of people took the streets against the attacks on Afghanistan and Iraq. The anti-war movement faded under the Obama administration, even though he escalated US militarism, but other movements arose such as Occupy, immigrant’s rights, the fight for 15, Idle No More and black lives matter. Erica Chenowith posits that current youth activists “did their first activism with their moms. It’s a quicker learning curve for kids.”

At present, large drivers of mass protests are reaction to the actions of the Trump administration and the Democrats using their resources to augment and steer anti-Trump anger into elections. To prevent what happened to the anti-war movement under President Obama, people will need a broader understanding of the root causes of the crises we face, not the shallow analysis provided by the corporate media, and will need to understand how social movements can be effective.

To assist in this education, Popular Resistance is launching the Popular Resistance School. The first eight week course will begin on May 1 and will cover social movement theory – how social movements develop, how they win and roles people and organizations play in movements. All are welcome to participate in the school. There is no cost to join, but we do ask those who are able to donate to help cover the costs.

For more information on the school and to sign up, click here. Those who sign up will receive a weekly video lecture, a curriculum and an invitation to join a discussion group (each one will be limited to 30 participants). People who complete the course can then host the course locally with virtual support from Popular Resistance.

The next decade has the potential to be transformative. To make it so, we must not only develop national consensus that issues are being mishandled, that policies need to change and that we can change them, but we must also educate ourselves on issues and how to be effective. We have the power to create the change we want to see.