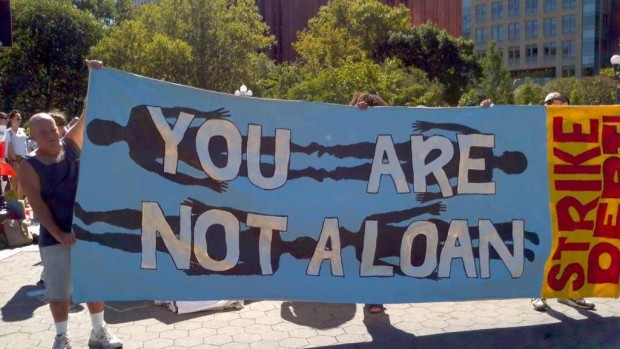 Rolling Jubilee: This Debt Fairy Has A Big Plan

CLEVELAND, Oh — When Tina Dwyer got a letter notifying her that a $615 debt she owed to Everest College had been forgiven, she thought someone was trying to scam her.

Everest had been hounding Dwyer for payment of the fees since she dropped out of its online classes in 2011. She had bigger debts – she says she owes $40,000 in federal student loans and has no degree to show for it – but the for-profit school was making her miserable with hounding calls and dunning letters about the unpaid $615.

So it took the North Carolina resident awhile to digest Rolling Jubilee’s letter, which proclaimed, “We just got rid of some of your Everest College debt! …. You no longer owe the balance of this particular debt. It is gone, a gift with no strings attached.”

Yes, Virginia, there is a debt fairy.

Rolling Jubilee is a debt buyer like no other. The nonprofit buys and forgives consumer debts in what is a carefully calculated publicity stunt meant to spark conversations about the ethics of debt and the squirrelly secondary marketplace in which debts are sold for pennies on the dollar to successive rounds of debt collectors.

The debt-forgiveness program was the brainchild of StrikeDebt.org, an offshoot of Occupy Wall Street.

“People usually have some questions about it. “Does it work? Is it real?’,” says Thomas Gokey, a spokesman for effort.

For the lucky few who have debts erased, it does.

The group raised about $700,000 from donors for Rolling Jubilee and claims it has so far wiped out $18.5 million in medical and student loan debts.

Cleveland Heights resident Susan Miller contribute $25 early on despite being in what she calls “forced retirement.”

“I am not being hounded by debt collectors, but I know people who have been,” said Miller.  The idea that she could make a donation that would help someone else and spark a larger conversation about debt appealed to her, she said.

People cannot ask Rolling Jubilee to pay off their debts, and the organization doesn’t select individuals to help. Instead it buys debt portfolios – bundled debts sold off by a creditor or debt collector – as they come on the market.

Rolling Jubilee is strategic about the kinds of debt it purchases. Its first debt buys involved medical debts.

These debts are fairly controversial because one medical procedure can trigger bills from multiple providers, and people rarely know how much they’re going to owe until afterward, when their provider and insurer settle up. (Not to mention those goofy facility fees that ding consumers for showing up at an appointment at a hospital-affiliated office.)

“No one borrows money and then goes to get chemotherapy,” says Gokey. “They get the chemotherapy.”

About 22 percent of working-age adults have received a collection notice or call about a medical debt.

Debts that land on a consumer’s credit reports can result in them having to pay more for credit or property insurance and, because a fair number of employers scan credit reports when making decisions, unpaid debts may also hinder someone from landing a job or getting a promotion. In a report issued last month, the National Consumer Law Center noted that medical debts, while problematic for many consumers, tend to be particularly burdensome for low-income or underinsured consumers.

Last May, the Consumer Financial Protection Bureau found that medical debt may shave 22 points off the scores of people who otherwise pay bills on time. (FICO, a major credit scoring company, is rolling out a new scoring model that reduces the impact of these types of debt.)

Given that, medical debt was a juicy first pick for Rolling Jubilee. In September, the group tackled another controversial debt topic – student loan debt – when it bought a portfolio of debt from Corinthian Colleges, which operates the Everest, WyoTech and Heald colleges.

Corinthian struck a deal with the U.S. Department of Education to sell off or teach out its campuses after the department temporarily cut off its supply of federal student loans for failing to provide documentation about graduate employment. Last month, CFPB sued Corinthian in an effort to force the school to forgive or refund $569 million to students for what the bureau says were predatory private loans.

But the group has a bigger end game.

Strike Debt is wrapping up the Rolling Jubilee project. Gokey estimates it has enough money left to buy two or three more debt portfolios before it exhausts its funds.

And then ….. the debt fairy morphs into a debt demon.

In what should make veins in the blue blood community run even colder, the group plans to move on to organizing “debt strikes” in which selected groups of debtors who share a common debt or creditor strategically stop payment in an effort to force creditors to renegotiate a yet-to-be defined “unjust” debt by, for example, reducing the principal or interest.

“It’s a waste of time to work through a political system bought and paid for by industries,” Gokey said. “We need to organize mass resistance.”

Whether trying to destablize the credit system is a good idea is debatable. And whether enough consumers would buy into the idea of a strike to make it effective, considering the huge risks involved to them personally, remains to be seen.

But it certainly should get people talking.