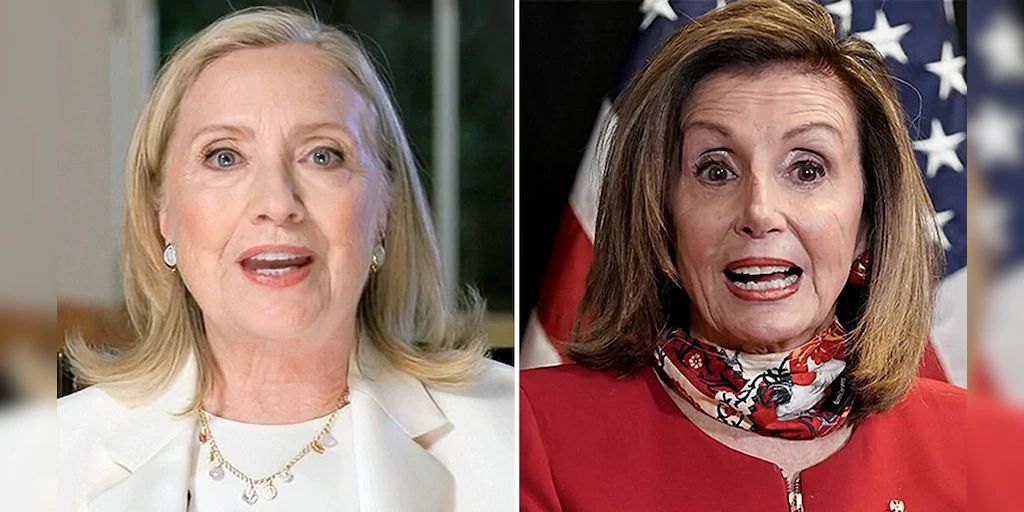 Round Up the Usual Suspects; Don’t Forget Putin

Interviewed by Mrs. Clinton Monday, Speaker Nancy Pelosi eagerly rose to the bait when Clinton spoke of “her concerns that the outgoing commander-in-chief was compromised by the Kremlin”. Setting the stage, Clinton expressed the hope that “we’ll find out who he [Trump] is beholden to, “who pulls his strings”.

Clinton added ominously: “I would love to see his phone records to see whether he was talking to Putin the day that the insurgents invaded our Capitol”. She then asked Pelosi if the nation needs “a 9/11-type commission to investigate and report everything they can pull together.”

Pelosi agreed on the need for such a commission, and proceeded to burnish her own anti-Putin credentials:

“As I said to him [Trump] in that picture with my blue suit … pointing rudely at him, ‘With you Mr. President, all roads lead to Putin.’’ Pelosi conceded that she does not know ‘what Putin has on him politically, financially, or personally, but what happened last week was a gift to Putin.”

Pelosi added, “And these people, unbeknownst to them, they are Putin puppets. They were doing Putin’s business when they did that at the incitement of an insurrection by the president … so, yes, we should have a 9/11 commission and there is strong support in the Congress for that.”

What leaps out of this Clinton-Pelosi pas de deux is who is leading the dance. Clinton hints broadly (not, of course, for the first time) that Putin is pulling Trump’s strings. It is Clinton who voices suspicion that Trump and Putin were somehow coordinating on the phone on Jan. 6; and it is she who suggests that “a 9/11-type commission” might be needed.

Due largely to the captive “mainstream” media, ‘Russia Russia Russia’ has proved to be the gift that keeps giving for the Democrats. Are there limits to the degree of credence Americans will give to corporate media spinning all the sins attributed to Russian President Putin? Why the insinuation that he may be partly to blame for the violence at the Capitol on Jan. 6?

It’s a matter of convenience. For the Democrats it has been super-convenient to blame Mrs. Clinton’s defeat in 2016 on Russia, although key aspects of that case (Russian “hacking” of the DNC, for example) have been debunked.

But, don’t go away, Russia, not just yet. The MICIMATT still finds you convenient as the kind of “threat” it can cite to justify spending untold billions of dollars on defense, enriching the already rich. Please see “Why Russia Must Be Demonized.”

The way the U.S. system is structured, it matters little in the grand scheme of things on where the money is spent – whether a Republican or Democrat sits in the Oval Office. In short, the Military-Industrial-Congressional-Intelligence-MEDIA-Academia-Think-Tank complex rules the roost (MEDIA in all caps, as the linchpin). Clinton wonders aloud who Trump “is beholden to”. Well, speaking of beholden, Joe Biden enters office with zero vaccination against being beholden – to the MICIMATT. It is fair to say that, without that the MICIMATT’s blessing, candidates end up like Bernie Sanders and Tulsi Gabbard.

There are just enough straws in the wind to make the MICIMATT and its clients and supporters nervous. What would happen, should Putin and Russia become less demonized? Could there be a thaw in the unnecessarily chilly relations with Moscow? What could that mean for bloated defense spending – particularly at a time when those funds are so desperately and demonstrably needed at home?

It appears likely that strategic arms negotiations with Russia will be high on President Joe Biden’s agenda, as will cooperation with Russia and the other parties to the Iran nuclear deal from which Trump withdrew. Assuming William Burns, former ambassador to Russia, is confirmed as CIA director, Biden will have at his beck and call a straight-speaking, highly experienced expert who has dealt with President Putin. Burns was also one of the chief US negotiators of the Iran nuclear deal.

In my view, it is also significant that President-elect Biden has held back from explicit condemnation of Russia by name amid the recent flurry of accusations of Russian hacking of several US institutions over the past several months. Yes, he has referred to what Secretary of State Pompeo and Attorney General Barr have said blaming Russia, and it can be argued that he has indirectly implicated Russia in the context of his sparse statements on this issue.

In my experience, though, the Kremlin is likely to have taken note of the caution that Biden has exercised on this neuralgic issue. Nor has this likely escaped the attention of the MICIMATT and induced some worry about the long-term viability of the portrayal of Putin as villain.

The Kremlin Is Watching

Oliver Stone told me recently that, in one of his conversations in Russia, Mr. Putin, somewhat exasperated, said something along the lines of, “Now Russians are thought of like Jews before World War II”. Think about that. Amid the Russia Russia Russia over the past four-plus years, Putin has kept his voice down – and his powder dry – while staying open to negotiations to reduce arms competition, cyber warfare, and other facets of bilateral tension. If past is precedent, he is likely to see opportunities to take a fresh look at US intentions under President Biden – especially during the traditional “honeymoon” period normally accorded a new president.

But clearly, Putin is also aware of the parallels between the demonization of him and Russia and how Jews were blamed for just about everything during the Thirties. Evidence-free accusations by the likes of Pelosi and Clinton will make the task of restoring a modicum of trust an uphill battle.

Ray McGovern works with Tell the Word, a publishing arm of the ecumenical Church of the Saviour in inner-city Washington. A CIA analyst for 27 years, he led the Soviet Foreign Policy Branch and prepared/briefed The President’s Daily Brief for three presidents. In retirement he co-founded Veteran Intelligence Professionals for Sanity (VIPS).