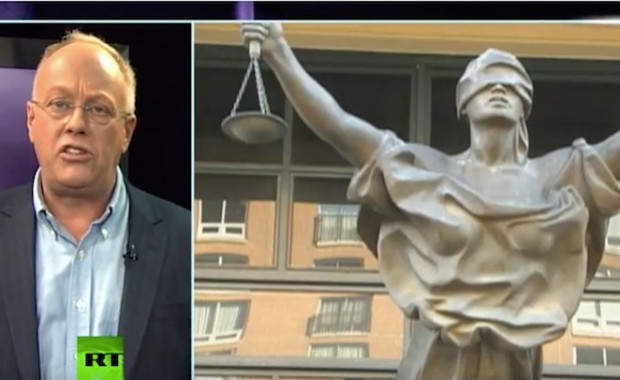 Above Photo: Chris Hedges in a screen shot from his RT America program, “On Contact.” (RT America)

In one of the most horrendous blows to press freedom since the anti-communist witch hunts of the 1950s, the U.S. Department of Justice has forced the news broadcaster RT America to file under the Foreign Agents Registration Act (FARA).

The assault on RT America, on which I host the show “On Contact,” has nothing to do with the dissemination of Russian propaganda. It is driven by RT America’s decision to provide a platform to critics of American capitalism and imperialism, critics who lambast a system of government that can no longer be called democratic. And it is accompanied by the installation of algorithms by Google, Facebook and Twitter that divert readers away from left-wing, progressive and anti-war websites, including Truthdig. The World Socialist Web Site has seen its search traffic from Google fall by 74 percent since April. Google, in a further blow, this month removed RT from its list of “preferred” channels on YouTube. Twitter has blocked all advertising by the channel.

Put the censorship campaigns together and the message is clear: Left-wing critics, already marginalized by the state, must be silenced.

It would seem, given how we are locked out of the corporate media and public broadcasting, that the assault is overkill. But the ideology that sustains the corporate state, the “free market” and neoliberalism has lost all credibility. The corporate state has no counterargument to its critics. The nakedness of corporate greed, exploitation and repression is transparent across the political spectrum. The ideological fortress erected by corporate power and sustained by its courtiers in the press and academia has collapsed. All it has left is a crude censorship.

Complicit in this censorship is a bankrupt liberal class. The institutions tasked with defending press freedom—including the ACLU, Human Rights Watch, the Committee to Protect Journalists and PEN—along with major news outlets such as The New York Times, have served as the corporate state’s useful idiots. Only a handful of journalists, including Truthdig Editor in Chief Robert Scheer, grasp and decry the very real danger before us.

The charge that RT and these left-wing sites disseminate “foreign propaganda” is the beginning, not the end, of a broad campaign against press freedom. Once this precedent of state censorship is normalized, far more tepid and compliant media outlets will be targeted. Max Blumenthal wrote two good pieces on AlterNet about the puppet masters behind the censorship campaign. [Click here and here.]

The venom of the state toward its critics was displayed in a report by the Director of National Intelligence (DNI), “Assessing Russian Activities and Intentions in Recent U.S. Elections,” issued Jan. 6. In the report, seven pages were specifically directed at RT America, much of the language focused on the journalist Abby Martin. Martin became one of the best-known critics of the corporate state during the Occupy movement. Her show on RT, “Breaking the Set,” which had been off the air for nearly two years when the report was published—a glaring error for an intelligence community awash in budgets of tens of billions of dollars—was denounced as a disseminator of “radical discontent.” The report complained that RT gave airtime to third-party candidate debates. The document attacked RT hosts for asserting that the two-party system does not represent the views of at least one-third of the population and is a sham. It excoriated the network for covering Black Lives Matter, Occupy Wall Street and fracking.

RT’s reports often characterize the United States as a “surveillance state” and allege widespread infringements of civil liberties, police brutality, and drone use.

RT has also focused on criticism of the US economic system, US currency policy, alleged Wall Street greed, and the US national debt. Some of RT’s hosts have compared the United States to Imperial Rome and have predicted that government corruption and “corporate greed” will lead to US financial collapse.

The “Alice in Wonderland” quality of the report would be laughable if it was not so ominous. The United States, in fact, is a surveillance state. Civil liberties have been eviscerated. Police brutality is endemic. Our drone wars have made us state terrorists. The economic structure serves the wealthiest corporations and oligarchs. Wall Street is run by a criminal class. Our debt is unsustainable, especially once the dollar is no longer the world’s reserve currency, and like all decaying empires we are headed for collapse. The DNI report clarifies what the ruling elites fear—not fake news but the truth. And the truth is that the elites have destroyed the country and are traitors to democracy.

The DNI report was followed by a congressional hearing on “Extremist Content and Russian Disinformation Online,” held Oct. 31. Executives of Facebook, Twitter and Google were grilled about their roles in distributing fake news and extremist content that in the words of Republican Sen. Chuck Grassley included “spread[ing] stories about abuse of black Americans by law enforcement.” The executives promised to double down on their censorship, and they did so.

The ruling elites are desperately trying to shift the focus away from the cause of the political insurgencies on the left and the right: extreme social inequality. It is for this reason that critics who highlight and explore the roots and causes of social inequality must be discredited or silenced. If social inequality is accepted as the driving force behind the decay of the American state and the mounting rage of much of the population, then the structures that profit from this inequality will come under assault. All the elites have left is to paint their critics as “agents of a foreign power.”

The United States increasingly resembles a totalitarian state. Our anemic democracy is on life support. A reasoned debate about social inequality or the crimes and misjudgments of empire is becoming impossible. This presages a frightening future. There will be many “good” Americans who, when the history of this moment is recorded, will be responsible. And one day, to their surprise, they too will be victims.