Rumors Of KKK March Lead To Rapid Mobilization In Durham

They said they were “dancing hate away.”

Drumming at the counterprotest against the KKK in Durham, North Carolina on Aug. 18, 2007. #HowIFightForJustice #FridayFeeling pic.twitter.com/vrpUKhw1zQ

Durham, NC – 11:25 a.m.: In a recorded message to employees, Durham County closed office buildings and sent workers home early on Friday. All employees were instructed to leave for the day, take their belongings and avoid downtown.

Amid rumors that white supremacist groups plan to demonstrate in Durham, the Durham County Sheriff’s Office on Friday issued a statement reminding citizens that protests require a legal permit and any demonstrators must abide by the law.

The statement reads, in full:

“The Sheriff’s Office is thoroughly researching the potential of several groups with opposing viewpoints holding demonstrations in Durham. This is partly why the Sheriff’s Office continues to remind demonstrators to first obtain a permit and most importantly, abide by the law. I expect demonstrators to conduct themselves in such a manner that is legal and respectful of the Durham County community. Again, I call upon city and county leaders to establish rules for demonstrators.”

After racially-charged protests and anti-protests turned violent last weekend in Charlottesville, Va., a group of people associated with the Workers World Party and others pulled down a Confederate statue outside the Durham County courthouse. Their actions were reflected in a rallies, protests and calls for the removal of Confederate symbols nationwide.

One of those charged, Elena Everett, 36, said that she does not have any regrets about her involvement in vandalizing the statue, despite the charges against her. “The lawmakers in North Carolina have made it impossible to take those things down legally. Communities have the right to remove symbols of racism and white supremacy from their community,” Everett said. “I hope people all across the south look at Durham as an example.”

11:35 a.m.: Several downtown Durham businesses, including Scratch Bakery and SunTrust bank, have closed early or not opened as rumors swirl of a planned white supremacist rally.

11:40 a.m.: Police have blocked the road in front of the old Durham County Courthouse at 201 E. Main St. ahead of a rumored white supremacist protest.

12:07 p.m.: Crowds of people could be seen holding signs on Main Street in downtown Durham. A banner read “We will no longer be intimidated,” and people were seen holding “Black Lives Matter” signs.

12:11 p.m.: The Downtown Durham YMCA and the YMCA at American Tobacco are closing early.

12:16 p.m.: The group marching in downtown Durham has grown into the hundreds. The group was chanting, holding signs and banners.

12:18 p.m.: Durham County Sheriff Mike Andrews has issued a statement regarding widely circulated reports of counter protests: “We have received numerous reports of potential counter protests in the Durham community. At this time, law enforcement continues to monitor the area and have not confirmed reports of activity. We are urging the public to avoid circulating rumors on social media and instead wait for verified information from officials monitoring the situation.”

12:23 p.m.: So far, there is no evidence of a white supremacist demonstration

12:26 p.m.: Mayor Bill Bell said he understands why people are protesting – as long as it is “done peacefully.” Says “rumors” have gotten this crowd downtown.

12:36 p.m.: “We need to stand together…Donald Trump needs to go,” another demonstrator said.

12:39 p.m.: A group of people told WRAL News that they were attending the protest with the intention of keeping people safe. One man was seen carrying an ax.

12:50 p.m.: A man said he was attending the protest to stand up against “another round of Jim Crow (laws).” He said it was a good place to be today.

12:56 p.m.: A UNC professor said she was attending the demonstration to stand up against bigotry

12:57 p.m.: Durham County Sheriff Mike Andrews said he is not aware of any permits that have been issued today.

1:08 p.m.: A group of protesters defaced what remains of a confederate monument in downtown Durham. “Death to the Klan” was written on the monument.

1:12 p.m.: A “party-like” atmosphere was described in downtown Durham as people danced to drumbeats and others could be heard chanting.

1:17 p.m.: District Attorney Roger Echols had a news conference scheduled for 1:30 p.m. It was unclear if he would still speak, given the demonstrations in the city.

1:23 p.m.: No hate groups, white supremacists, or KKK members have been seen in or around Durham. Multiple people were taking part in a dance party. They said they were “dancing the hate away.”

1:33 p.m.: The crowds in the streets had thinned a bit, partly due to the extreme heat.

1:40 p.m.: Durham County District Attorney Roger Echols held a news conference to provide an update on the protesters who were arrested earlier this week. He said, “I will not prosecute any people who simply participated in the protests and were not directly involved in the destruction of the monument.”

1:49 p.m.: Durham police say there have been no verified permits issued for protests on Friday evening, including a rumored white supremacist protest at 4 p.m.

2:07 p.m.: Crowd is beginning to disperse after leader of group said “KKK has backed off.”

2:10 p.m.: Durham Sheriff Mike Andrews issued a statement thanking the community for a peaceful demonstration. “We want to thank the Durham community for a peaceful demonstration. Throughout the day, we have received numerous reports of potential counter protests in the Durham community. The Sheriff’s Office has been gathering and reviewing information related to potential counter protests throughout the week. We have taken steps to ensure public safety. At this time, law enforcement continues to monitor the area and has not confirmed reports of activity. We are urging residents to avoid joining the crowd in the downtown area as law enforcement continues to monitor the situation. Residents are encouraged to rely on verified information.”

2:40 p.m.: The Durham County Sheriff’s Office said they “not received verified information confirming a counter protest will occur in Durham at 4 p.m. or 5 p.m.”

3:02 p.m.: Third Friday celebrations are not cancelled in Durham. A previous report said the demonstration has cancelled activities.

3:32 p.m.: Durham Police say they plan to reopen Main Street to traffic shortly. Demonstrators will be moved to sidewalk.

3:43 p.m.: Main Street reopens in downtown Durham, according to a tweet from the Durham Sheriff.

4:00 p.m.: Despite reports of Main Street reopening, crowds of demonstrators remain in the streets of downtown Durham. There is still no evidence of a white supremacists rally. No arrests or acts of violence have been reported.

5:00 p.m.: The majority of demonstrators have gathered on Roxboro Street. Many drivers are honking in support as they pass protesters. The protest has remained peaceful. Main Street remains closed. Police presence has lightened.

Protestors are still here in #Durham. They are chanting outside of the Durham County Detention Center #WRAL pic.twitter.com/MKGtmbSMPG

“We have old folks, young folks, black folks, white folks. This is America in the future,” one demonstrator said. 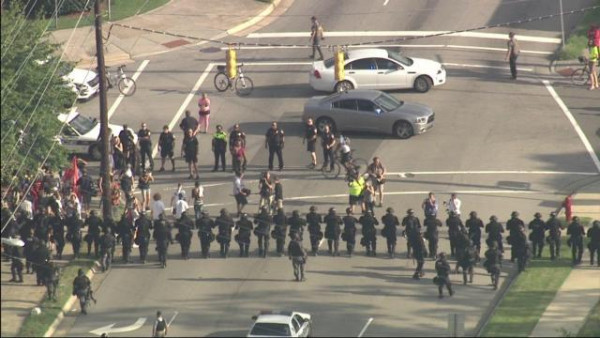 6:45 p.m.: Durham police tweeted that one demonstrator is in custody and charged with failure to disperse.

Police said Friday’s demonstrations in downtown Durham “remained mostly peaceful and did not result in any injuries.” Two officers were treated for heat-related illness.

Crowd is beginning to disperse after leader of group said “KKK has backed off” #durham #wral pic.twitter.com/uh4t79PIZB — WRAL NEWS in NC (@WRAL) August 18, 2017

8:30 p.m.: Durham police release the name of man arrested in downtown Durham. William D. Fulton, 23, of Durham, was arrested during the demonstration at Durham Police Department headquarters. He was charged with failure to disperse.

“The Durham Police Department respects our residents’ right to peacefully assemble and exercise their First Amendment right and we appreciate those who adhered to those values today,” said Police Chief C.J. Davis.

“I want to thank our DPD officers, the Durham County Sheriff’s deputies, the N.C. Highway Patrol, and multiple other public safety partners who ensured participants and observers remained safe during today’s events.”