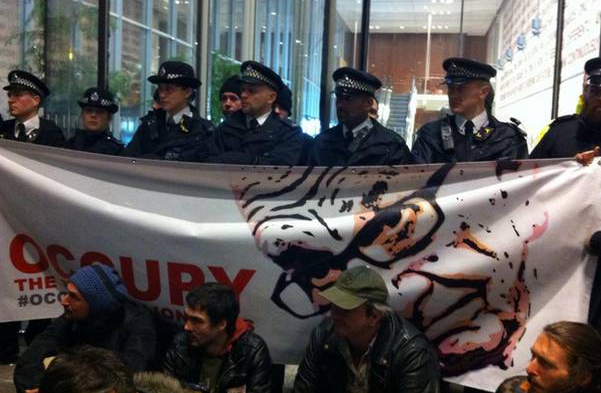 Protesters from Occupy London are blockading the entrance to the News UK headquarters opposite the Shard.

The participants have been peacefully protesting in the piazza between London Bridge Underground and the News Building all week, but moved to stage a sit-in protest outside the office in London Bridge Street this evening.

Images shared on social media show police officers blocking the entrance to the headquarters with a large crowd of demonstrators in front of them.

The crowd can be seen carrying megaphones, placards and banners.

An event on the Occupy London Facebook page called ‘Occupy Rupert Murdoch’ described the protest as reaching a “peak” on Saturday, starting with a mass rally protest at 2pm.

It said: “Bring drums, horns, gongs, seeds for Beating The Bounds ceremony to Reclaim The Sun around Rupert Murdoch’s News UK HQ on London Bridge Street, opposite the Shard.

“Let’s make the eclipse of Rupert Murdoch permanent from the UK’s politics.”

A spokesperson for News UK said: “As a leading media organisation we respect the right to protest and free speech, and there have been peaceful protests throughout this week outside The News Building.

“We have continued to operate without disruption since the protests began last Monday. This evening the protesters approached the main entrance and are currently protesting directly outside the doors, obstructing access so the doors have been closed.

“Met police officers are on site in control of operations and we will continue to liaise with them. This evening’s protest has had no effect on our operations and the public will be delighted to know that the first editions of The Sunday Times and Sun on Sunday have gone to print “.

A spokesman for the Met said no arrests have been made and the protest remained “peaceful”.