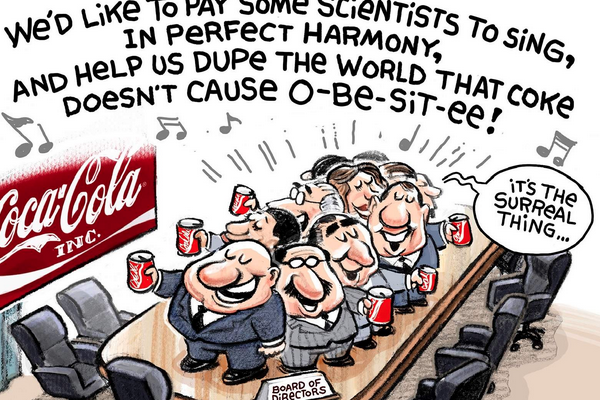 West Virginia is in a dead heat (emphasis on dead) with Mississippi. That’s according to the most recent ranking (2013) from the Trust for America’s Health — up from number four in 2012.

What can be done?

The West Virginia School of Public Health Should be taking the lead.

Instead, according to a report in the New York Times last month, “Coca-Cola Funds Scientists Who Shift Blame for Obesity Away From Bad Diets,” Coca-Cola has given money to Dr. Gregory Hand, now the dean of the West Virginia School of Public Health, to fund a non-profit group — the Global Energy Balance Network — to promote the view that “weight-conscious Americans are overly fixated on how much they eat and drink while not paying enough attention to exercise.”

Health experts contend that Coke is “using the new group to convince the public that physical activity can offset a bad diet despite evidence that exercise has only minimal impact on weight compared with what people consume,” the Times reported.

“Coca-Cola had provided significant funding to Dr. Hand, who left the University of South Carolina last year for West Virginia,” the Times reported. “The company gave him $806,500 for an ‘energy flux’ study in 2011 and $507,000 last year to establish the Global Energy Balance Network.”

“It is unclear how much of the money, if any, ended up as personal income” for Dr. Hand, the Times reported.

Dr. Hand told the Times that “as long as everybody is disclosing their potential conflicts and they’re being managed appropriately, that’s the best that you can do.”

“It makes perfect sense that companies would want the best science that they can get,” Dr. Hand said.

The best science money can buy?

Instead of fronting for Coca-Cola, the West Virginia School of Public Health should be pushing hard for public health measures to combat obesity in the state.

Thirty-five of Dr. Hand’s colleagues, including Walter Willett, chairman of the Department of Nutrition at Harvard’s School of Public Health, wrote to the Times that “the scientific nonsense being peddled by the Coca-Cola-funded Global Energy Balance Network is outrageous.”

“The Scientific Report of the 2015 Dietary Guidelines Advisory Committee provides compelling evidence for the causal link between sugary drinks and disease, as well as the need for exercise,” they wrote. “Unfortunately, Coca-Cola and its academic helpers won’t accept the well-documented evidence that sugary drinks are a major contributor to obesity, heart disease and diabetes.”

Gary Ruskin, co-director of the Oakland, California-based public interest group U.S. Right to Know says that “it is wrong for a professor of a public health school to help establish a corporate front group to protect Coca-Cola and its profits.”

“It is especially wrong for a dean to do so,” Ruskin said. “Dean Hand should be fired or should resign immediately.”

Dr. Marion Nestle is a professor of nutrition at NYU and author of the upcoming book “Soda Politics: Taking on Big Soda (and Winning).”

Dr. Nestle says that “if the move to force Professor Hand’s resignation has one lesson to teach, it is that universities need to establish and enforce much stricter guidelines for use of such funds than has been standard practice.”

“I can’t think of any way that professors can accept corporate funding for their research and maintain academic integrity, but universities can help them with this problem by setting firm limits on how such funds are used,” Nestle says.

West Virginia needs someone like Dr. Nestle and Dr. Willett who will take on Big Soda and win.

We want to be number one in public health, not obesity and disease.

Russell Mokhiber, of Berkeley Springs, is editor of morgancountyusa.org and host of the local interview show “This Week in Morgan County.”