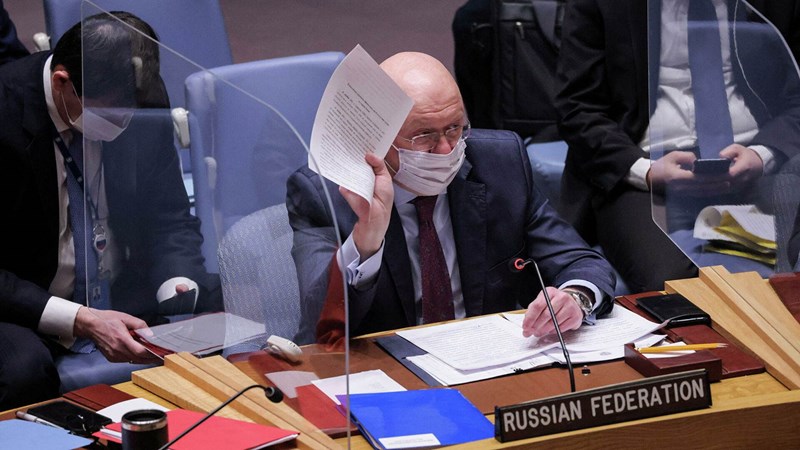 Russia Accuses US And NATO Of Provoking War In Ukraine

On Monday, January 31, at a UN Security Council (UNSC) meeting called to discuss the situation in Ukraine, the Russian envoy to the UN, Vasily Nebenzya, accused the US and the North Atlantic Treaty Organization (NATO) of whipping up war hysteria in eastern Europe.

Nebenzya was responding to the US permanent representative at the UN, Linda Thomas Greenfield, who reiterated her country’s claims of an imminent threat of Russian invasion of Ukraine. She called on the UN to take urgent steps to prevent the war, saying that failure to do so will lead to “horrible consequences.” She claimed that deployment at the Russian border is the “largest in decades” and that “diplomacy will not succeed in an atmosphere of threat and military escalation.”

Nebenzya dismissed the US claims saying that the special session of the UNSC was called by the US and its allies to mislead the world about the global security situation in the context of Ukraine. He denied the US allegations that deployment of troops on Russian borders will eventually lead to an invasion of Ukraine.

Nebenzya also questioned the figure of over 100,000 Russian troops on the Ukrainian border as claimed by Greenfield. He said that such exaggerated figures are being used only to provoke a war in the region at the cost of Ukrainians. He claimed that deployment of troops on its borders was a regular affair.

The US and NATO had earlier claimed that Russia has amassed more than 100,000 troops on its borders with Ukraine in order to invade the country. Russia has been denying the allegations saying that its deployment along the Ukrainian border is defensive in nature against the threats posed by NATO’s military acts in eastern Europe.

Quoting Ukrainian president Volodymyr Zelensky’s statement last week in which he had rebuked the US and NATO for making unverified claims, Nebenzya accused them of playing to the gallery and indulging in “megaphone diplomacy” while pumping weapons into Ukraine. He asserted that “talk about an impending war is provocative in itself.”

Russia had earlier lost the procedural vote despite stating that the US call for the meeting was merely a PR campaign and shameful for the reputation of the UNSC.

Last week’s diplomatic efforts between the US and Russia to end the controversy around the deployment of troops did not yield any concrete results. The US and its allies such as the UK have continued with their threats to impose severe economic and political sanctions on Russia in the event of an invasion. US president Joe Biden threatened to impose “nuclear level” sanctions against Russia and even ban it from the international financial transaction system SWIFT.

Moscow has asked the US to desist from military provocations in the region and refrain from attempts to establish any military base in the former Soviet Republics which are not yet part of NATO. It has demanded that NATO not enter into any bilateral military agreement with these countries or include Ukraine as a member.

Russia has been opposing NATO’s eastward expansion claiming that this creates a security threat. It wants specific guarantees that Ukraine will never be a member of the collective security treaty.

So far, the US and NATO have maintained that this eastward expansion cannot be discussed with Russia. With the US failing to respond to Russian security concerns, the country’s leadership has said that it is looking for a “military-technical” solution without any physical invasion of Ukraine to address the threats posed by NATO’s military activities in the region.

Russian diplomats both at the UNSC meeting and on other occasions have highlighted the issue of NATO’s military presence and the deployment of weapons in Ukraine. In the last two weeks, the US has also sent two shipments of weapons to Ukraine.