Above Photo: Russian antisubmarine ship Moskva is seen in Venezuela’s port of La Guaira, about 19 miles north of Caracas on August 27, 2013. Moscow’s military ties with Latin America peaked during the Cold War, but Russia has sought to again shore up relations as the U.S. continued to intervene in the region.LUIS ACOSTA/AFP/GETTY IMAGES

The Russian military has signed a deal that would allow it to send military ships to Venezuela, expressing support for the Latin American country. The U.S. has been critical of current Venezuelan president, Nicolás Maduro, and has backed attempts to replace him.

Venezuelan Defense Minister Vladimir Padrino met Thursday in Moscow with his Russian counterpart Sergei Shoigu, with whom he “signed an agreement on the visits of warships to the ports of both states and discussed the situation in Venezuela, as well as issues of bilateral military and military-technical cooperation.” The deal came as Caracas was in the throes of a months-long political crisis between Moscow-backed President Nicolás Maduro and Washington-backed National Assembly leader Juan Guaidó.

Shoigu, for his part, said Russian officials “are closely following the events taking place in Venezuela” and “note the unprecedented pressure of Washington aimed at destabilizing the situation in your country.” Offering his support for Maduro in “pursuing an independent foreign policy and counteracting U.S. attempts to change the legitimately-elected government,” Shoigu said he considered “external interference, especially in the present, extremely tense atmosphere, unacceptable.”

Venezuela was already suffering from a debilitating economic crisis deepened by U.S. sanctions announced by Trump back in 2017. However, the country erupted with a political rift in January as Guaidó declared himself president in a move swiftly backed by Washington and its regional allies.

Maduro, who has since been cut off by much of the West and its international partners, has received continued backing from fellow left-wing-led Latin American states such as Cuba, as well as other powers abroad including Russia, China, Iran and Turkey.

In a tweet published after Thursday’s meeting, Padrino said the new would help to “maintain a dynamic and strong relationship” with Russia. He said it would also “result in more exchange in education, training and combined exercises on land, water and air.”

One month before Guaidó proclaimed himself leader in January, Russian bombers staged joint drills with Venezuelan warplanes over the Caribbean, alarming U.S. officials. Defying U.S. warnings, Russia has continued to deploy personnel to Venezuela as part of its “military-technical cooperation” dating back to 2001 with the oil-rich state across the world.

When Guaidó staged an abortive uprising in late April, top Trump administration officials blamed Moscow for keeping the socialist leader in power, though the president himself later downplayed this connection. Padrino was later named by White House National Security Adviser John Bolton as one of three top Venezuelan officials that had allegedly agreed to participate in the regime change plot only to back out at the last minute, something the general has vehemently denied. 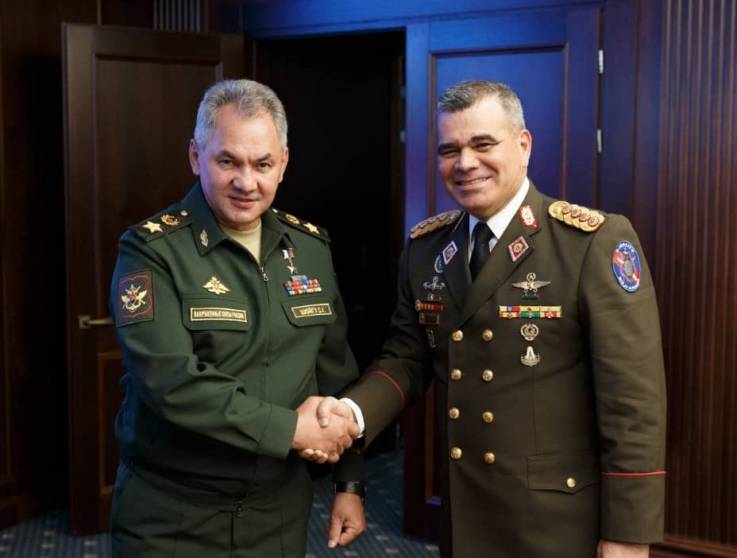 Since then, Padrino and Bolton have engaged in heated exchanges on Twitter, criticizing one another’s position on Venezuela. On Wednesday, Bolton commented on the death in June of Venezuelan Navy Captain Rafael Acosta, who was accused of treason and the subject of a recent New York Times report detailing his alleged torture and execution.

Tagging Padrino, Bolton tweeted: “you have a choice to make. Defend your fellow soldiers & countrymen in the face of torture & abuse at the hands of the dictator Maduro. Or, you will be remembered for being complicit in these actions, betraying your constitutional oath.”

“Nicolas Maduro’s repression knows no boundaries! He is a desperate dictator willing to torture and abuse members of the Venezuelan military to retain his grip on power. We must hold him accountable for his disregard of Venezuelas institutions,” Bolton continued. “We stand with those members of the Venezuelan military that swore allegiance to their country and constitution, not the Maduro dictatorship! We are with you as you fight to defend the freedom of your fellow Venezuelans.”

In this instance, Padrino did not offer a public response.