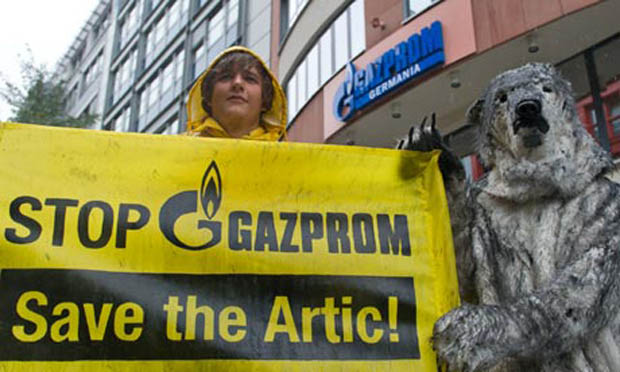 Russia has opened a criminal case against Greenpeace activists who boarded an Arctic oil rig belonging to energy giant Gazprom, and says it plans to charge them all with piracy, regardless of their nationality. If convicted, they could face up to 15 years in a Russian prison.

The Greenpeace boat Arctic Sunrise was apprehended last Thursday in what the environmental organisation says were international waters, near the Prirazlomnaya rig in the Pechora Sea. Russian coastguards stormed the boat after activists attempted to climb aboard the rig to stop its operations, descending from helicopters on ropes and rounding up the activists with knives and guns.

Greenpeace lost contact with those on board the ship immediately after it was seized. Russian authorities said they were towing the ship back to the Arctic port of Murmansk using a coastguard vessel, as the captain of the Arctic Sunrise refused to carry out orders to turn back the ship. The ship anchored on Tuesday near Mishukovo, just north of Murmansk.

Maria Favorskaya, a Greenpeace representative in Murmansk, said the organisation and its lawyers had been kept in the dark about the charges and havd not received any documentation.

“The activists are being held on the boat, but we have no way of contacting them,” she told the Guardian. “They are basically hostages, and we don’t know what they are going to do with them next. We have seen a number of small boats travel to the Arctic Sunrise since it moored, but we have no information about who is on them or what their purpose is.”

Favorskaya said there were 30 activists of 16 nationalities on board the boat. A spokesman for the British Embassy in Moscow told the Guardian a consular official is on standby in Murmansk attempting to get access to the six British nationals believed to be on board. The Arctic Sunrise sails under a Dutch flag, and a Dutch diplomat is also in Murmansk.

“Representatives of the consular services whose nationals are aboard the ship have requested a meeting with the environmentalists. Such a meeting will be organised,” an official of the Russian security service FSB in Murmansk told the Russian agency Interfax, adding that for now the activists would remain on board the ship.

Vladimir Markin, a spokesman for Russia’s investigative committee, said on Tuesday that Greenpeace’s activities “not only infringe on the sovereignty of the state, but could also threaten the whole region’s ecosystem”.

Earlier, a spokesperson for the FSB said authorities decided to storm the boat on suspicion that the activists heading towards the rig were carrying an explosive device. Greenpeace says their safety pod was brightly coloured and clearly marked with the organisation’s logo.

Kreindlin said it was “absurd” to think that an organisation with a long history of non-violent protest could have been engaged in any kind of violent hostile activity. He said that in order to be charged with piracy, authorities would need to show that its activists wanted to seize property using violence, but Russian authorities disagree.

“When a foreign vessel filled with unspecified electronic technical equipment and a group of people claiming to be part of an ecological organisation try to storm a drilling platform, there are obvious doubts about their intentions,” said Markin of Russia’s investigative committee.

“It is hard to believe that these so-called activists did not know that the platform is a dangerous place and any unsanctioned actions on it could lead to an accident, which would endanger not only the people on board but also the ecosystem they are so zealous about defending.”

In a statement, Greenpeace International’s general counsel, Jasper Teulings, said the piracy charges showed “real desperation”, and insisted that piracy laws did not apply to peaceful protests. The organisation says supporters have sent more than 400,000 letters to Russian embassies around the world calling for the activists to be freed.

The Prirazlomnaya platform belongs to the Russian state energy giant Gazprom, and is due to begin operations early next year. It would make Gazprom the first company to drill offshore in the Arctic. Greenpeace say there are no safety plans in place for an oil spill at the rig, and that drilling there could cause huge damage to the fragile Arctic ecosystem. The company has denied there is any risk.

“We hope the investigative committee puts a stop once and for all to Greenpeace’s piracy in Russian waters,” Gazprom’s Arctic division wrote on its Twitter feed. “Good luck to them!” The company also linked to a television poll asking whether Greenpeace are environmental activists or “foreign agents and provocateurs”.