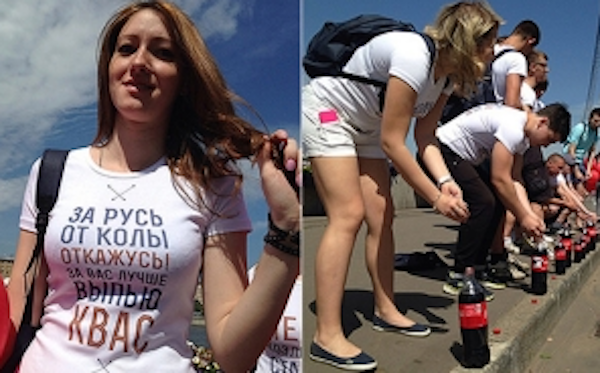 Left, a protester from the Russian activist group “Food Patriotism” shows off her shirt, which bears the slogan “I refuse Cola for Russia, I’ll drink to your health in kvass instead.” On the right, protesters set off mini-explosions by dropping Mentos into bottles of Coke. DNI

All across Moscow, “food patriots” are blowing up bottles of Coke in a carbonated, high-fructose protest against the United States.

Pictures and videos uploaded on VK, Russia’s version of Facebook, show dozens of young protesters — sporting shirts with slogans like “Defend our children from overseas poison” and “I refuse Cola for Russia, I’ll drink to your health in kvass instead” — lining up plastic bottles of coke and, in unison, dropping in pieces of Mentos candy to chemically erupt a three-foot-high caramel-colored fountain.

The tried-and-true juvenile party trick, according to activist group Food Patriotism, underlines the corrosive nature of the beverage that has long been synonymous with U.S. capitalism. “This is an educational program for parents,” one activist told DNI news. “Imagine that happening in your kid’s stomach.”

Though they purport to be advocates for children’s health (a recent demonstration took place on Russia’s Children’s Day) and only target unhealthy, processed foods, Food Patriotism apparently gets its name from the “culinary diplomacy” movement, pioneered by the controversial ex-head of Russia’s Federal Consumer Protection Service, Gennady Onishchenko.

Onishchenko — perhaps best known for issuing a series of unorthodox health warnings, including an advisory against international travel (adapting to different climates takes a toll on one’s body) and participation in public protests (you might catch the flu) — advocated for bans on food imports from Moscow’s political enemies. He outright blocked imports of Moldovan wine as tensions rose over the breakaway, ethnic-Russian region of Transnistria.

Amid the recent showdown over another breakaway, majority-Russian region in a former Soviet state, culinary diplomacy appears to be making a comeback. Washington has imposed sanctions on key Moscow officials, and though tensions between the U.S. and Russia have plateaued in recent days, relations between the Cold War foes remain icy.

According to Food Patriotism’s VK page, the group is calling for a vague boycott of certain U.S. food products: “We are all consumers, and can vote with our rubles against the products of our ideological opponents.”

The group has locked onto Coke because its signature, red-labeled bottle is the unrivaled international symbol for Western-led globalization, but American soft drinks also have a storied legacy in U.S.-Russian relations. Soon after then-vice president Richard Nixon convinced Soviet leader Nikita Krushchev to take a sip of Pepsi at a 1959 American trade exhibition, Pepsi became the first capitalist beverage to be marketed in the Soviet Union. Coca-Cola didn’t arrive in Russia until after the Cold War, when communism fell and the Soviet Union dissolved.

But Food Patriotism hasn’t taken a side in the Coke vs. Pepsi brand wars; demonstrators outside the U.S. Embassy this week have carried posters railing against Coke’s rival (which has since seen its market share in Russia eclipsed by Coca-Cola), as well as McDonald’s and other U.S. conglomerates, DNI reported.

In a statement to Al Jazeera, Coca-Cola did not comment on the Food Patriotism protests, only saying that the Coca-Cola Company “operates as a local business in each country where we operate … and we have committed to invest $3 billion in Russia between 2012 and 2016.”