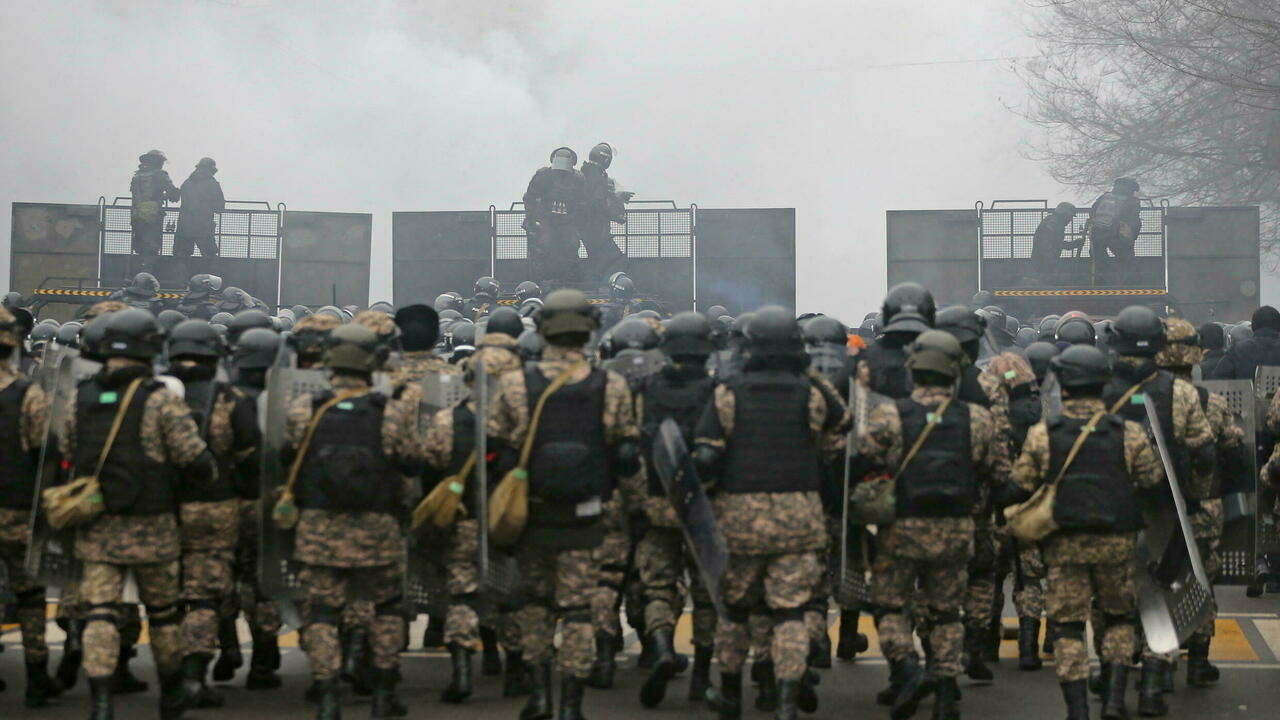 Above Photo: Kazakh law enforcement officers are seen on a barricade during a protest in Almaty, Kazakhstan January 5, 2022. Pavel Mikheyev, Reuters.

This group promoting the protests in Kazakhstan, NetBlocks, is not a neutral “internet freedom” group; it’s a US government-backed operation funded by the US govt’s Open Technology Fund, a project of CIA-created propaganda outlet Radio Free Asia

You know how it’s obvious that the violent protests in Kazakhstan are a “color revolution” against a major Russian/Chinese ally?

Kazakhstan’s president requested the forces after protesters stormed his residence and set it on fire.

The Russian-led Collective Security Treaty Organization (CSTO) announced Wednesday that it is sending peacekeeping forces to Kazakhstan after the country’s president requested help to deal with massive protests.

The CSTO is a six-member military alliance made up of six former Soviet states. Armenian Prime Minister Nikol Pashinyan, the CSTO’s current chair, announced the deployment and said the peacekeepers would be sent to Kazakhstan “for a limited period with the aim of stabilization and normalization of the situation in this country.” Pashinyan didn’t specify how many peacekeepers were being deployed.

The protests broke out across Kazakhstan on Sunday. On Wednesday, protesters stormed the residence of President Kassym-Jomart Tokayev and other government buildings and set them on fire. According to the Kazakh Interior Ministry, eight police officers and national guard members were killed across the country, and over 300 were wounded.

Bordering Russia and China, Kazakhstan is a wealthy oil-rich nation that has enjoyed relative stability since the collapse of the Soviet Union. The protests were reportedly sparked by an increase in fuel prices caused by the government ending price controls. Tokayev has since reinstated the price controls and taken other measures in an effort to quell the protests.

The US has put out statements calling for calm and is denying that it has any role in the protests. White House Press Secretary Jen Psaki denied what she called were “crazy Russian claims” that the US was inciting the civil unrest.

It’s not clear if any Russian officials have accused the US of being behind the protests, but considering Washington’s history meddling in countries that border Russia, it’s not that wild of an accusation to make.

The region is still dealing with the effects of the 2014 coup in Ukraine that was supported by Washington. In the aftermath of Belarus’ 2020 election, the US rejected the results and threw its support behind protesters and opposition leaders. Sometimes US meddling is less overt and done through organizations such as the National Endowment for Democracy, which has a presence in Kazakhstan.