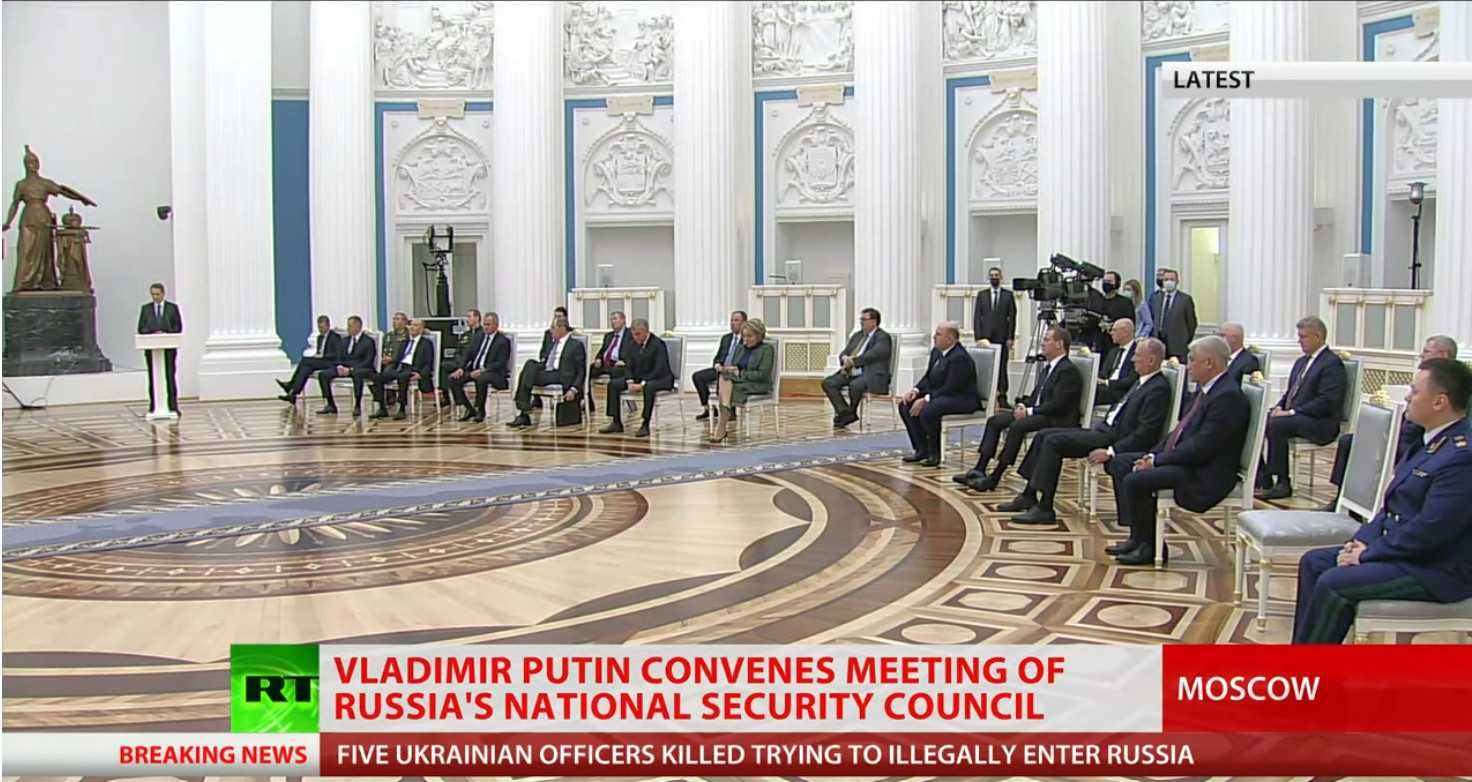 The whole meeting was shown on public TV. RT-English provided a live translation. The purpose of the show was to present Russia’s arguments to an international public.

The security council heard the opinions of the prime minister, foreign minister and defense minister. The leaders of parliament and of the security services also spoke.

The military reported that earlier today a group of Ukrainian saboteurs had tried to cross onto Russian ground but was prevent from doing so. A published video of the incident showed two burning BMP infantry fighting vehicles. Russia says that five of the intruders have been killed and one of them has been arrested.

Defense minister Shoigu reported that there are some 60,000 Ukrainian soldiers at the border of the DNR and LNR together with more than 500 tanks and lots of artillery. He also pointed out that the Ukrainian president Zelensky had announced that the Ukraine would leave the Budapest agreement and start to build nuclear bombs. He said the Ukraine has the knowledge and means to do that and called the move  extremely dangerous.

It was pointed out that recent artillery attacks had destroyed part of the water supply for Donetzk and that the destruction of a pipeline left many people without gas. This is seen as an emergency situation. Some 70,000 refugees have been received in Russia.

Several members of the security council pointed out that some 700,000 of the 4.6 million inhabitants of the rebellious Donbas region already have a Russian passport, some 500,000 more have applied for one. These are formal Russian citizens which Russia must protect from harm.

All members were of the opinion that the current situation needs a new solution. The Ukrainian government is obviously unwilling to fulfill the Minsk agreements by giving more autonomy to its Donbas region. It is instead trying to regain the region by war.

After hearing all opinions Putin said that he would make the decision later today.

What would it mean if Russia recognizes the DNR and LNR as sovereign states? For one – the Minsk agreement, which the Ukraine does not want to implement anyway, would be null and void.

What other steps would follow was not discussed but there are certain possibilities.

Neither the DNR nor the LNR incorporate all land that defines the formal administrative Donetzk and Luhansk regions of the Ukraine. The republics, with Russia’s help, could try to extend the border of DNR and LNR to the original administrative borders of those regions. That probably would mean a war which I still find unlikely to happen.

The economic integration of the DNR and LNR into Russia’s economy should be no problem. Both regions are rather rich with minerals like anthracite coal. Both have large industrial installations and a well educated Russian speaking public.

An open question is what the ‘west’ would do if Russia recognizes the republics.

The national security council is expecting more sanctions but several members shrugged them off. They said that sanctions would be imposed anyway no matter what Russia does or does not do. They expect that in the long term the sanctions will increase Russia’s autonomy and expand its economy. The sanctions are also expected to erode over time as Russia offers desirable products and is in itself a large market.

I find it unlikely that the ‘west’ would impose all sanctions it has prepared in response to Russia’s move today. It would the expense of all economic ammunition that can be used against Russia. As Russia still could take more serious action some sanctions must be held back for that eventuality.

Later today Russia’s president Vladimir Putin will give a televised speech to announce his decision.

I will update this post when it is known.

⚡#Putin has just had phone calls with @OlafScholz & @EmmanuelMacron.#Kremlin says #Russian president “briefed both leaders on the results of Security Council gathering & told them he is going to respective order [apparently on recognition of LNR/DNR].

The above tweet has now been confirmed by an official Kremlin statement about the phone call (machine translation):

Vladimir Putin had telephone conversations with President of the French Republic Emmanuel Macron and Federal Chancellor of the Federal Republic of Germany Olaf Scholz.

Vladimir Putin informed about the results of the expanded meeting of the Security Council of the Russian Federation, which considered the current situation around Donbass in the context of the State Duma’s decision on the recognition of the Donetsk and Luhansk People’s Republics. Today, the leadership of the DPR and LPR received appeals to recognize their sovereignty in connection with the military aggression of the Ukrainian authorities, massive shelling of the territory of Donbass, as a result of which the civilian population suffers.

With all this in mind, the President of Russia said that he intended to sign a relevant decree in the near future.

The President of France and the Federal Chancellor of Germany expressed their disappointment with this development. At the same time, they indicated their readiness to continue contacts.

It has happened. After a TV speech on the development of the Ukraine since the begin of Soviet communism and after laying out the list of Russian grievances with western aggression Putin signed the official recognition of the Donbas republics as independent states. There are now also cooperation agreements on defense and other issues signed by Putin as well as the heads of the Donbas republics.

If the Ukraine continues its war on Donbas Russia will respond with force.

Some Additional Bits On Ukraine

(February 22) – Yesterday Russia recognized the Donbas republics. This seems to include all of the Donetsk and Luhansk administrative regions which are largely controlled by the Ukrainian government forces. Here are some bits on the fall-out.

The German chancellor Olaf Scholz has halted the certification of the Nordstream II pipeline that is supposed to bring natural gas from Russia to Germany. That means higher energy prices for Germany and higher inflation.

German Chancellor Olaf Scholz has issued an order to halt the process of certifying the Nord Stream 2 gas pipeline. Well. Welcome to the brave new world where Europeans are very soon going to pay €2.000 for 1.000 cubic meters of natural gas!

It is political harakiri and will therefore most likely be reversed.

Showing ‘unwavering’ support by running away from the conflict:

“For security reasons, Department of State personnel currently in Lviv will spend the night in Poland. Our personnel will regularly return to continue their diplomatic work in Ukraine and provide emergency consular services,” Blinken said in a statement, adding that the U.S. commitment to Ukraine remained “unwavering.”

Ceasefire violation as counted by the OSCE special monitoring mission to Ukraine (note the changes to the Y-axes).

Sunday was a bit calmer than Saturday but the numbers are still at a much higher level than usual.

I find it likely that the sudden increase of artillery explosions from 80 per day to over 1,200 per day over the last week had an effect on the timing of Putin’s decision. 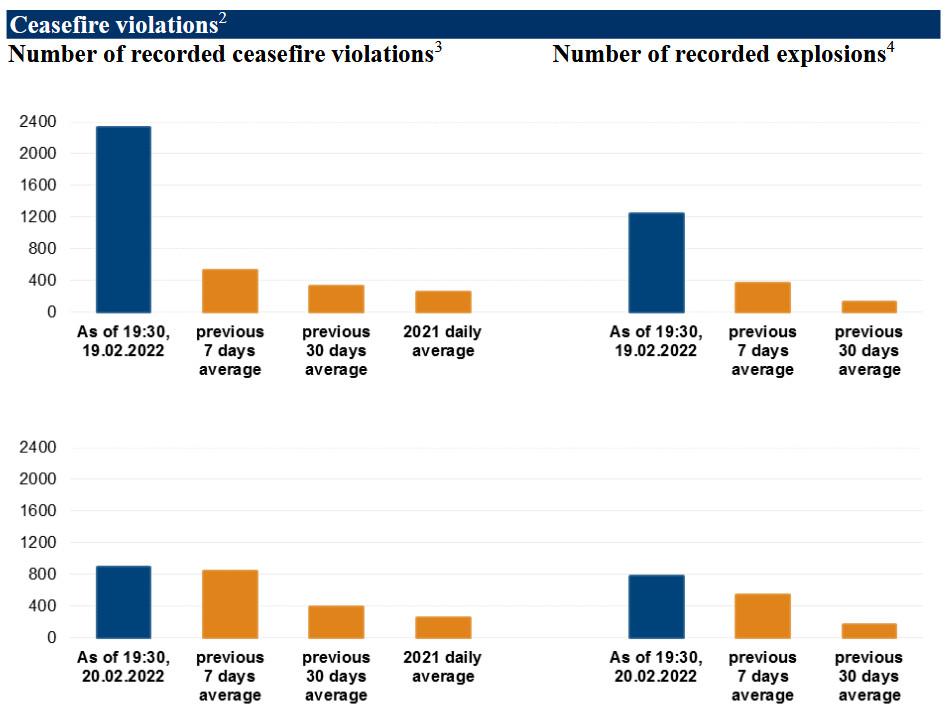 I agree with this Saker take:

The first thing which I want to point out is that this was a very carefully orchestrated event, and I don’t just mean today’s live meetings and signing.  For those of us who follow Russian politics very closely there can be no doubts that all this was prepared long BEFORE the Russian ultimatum to the West.

This is “the plan” which Putin once openly referred to.

Let me make this clear: this recognition should NOT, repeat, NOT, be seen in isolation.  It is just ONE PHASE in a PROCESS which began at least a year ago, or more, and there is much more to come.

Next, that must be repeated again, this is NOT about the LDNR, the Donbass or even the Ukraine, this is about a new security architecture on Europe and, therefore, on our entire planet.…

Next, I want to mention four specific threats made by Putin today (note, since the PR folks at the Kremlin are still working at their usual snail’s pace, I will have to make them by memory, please keep that in mind):

Again, I will repeat here what I wrote above: this recognition should NOT, repeat, NOT, be seen in isolation.  It is just ONE PHASE in a PROCESS which began at least a year ago, or more, and there is much more to come.

Address by the President of the Russian Federation – February 21, 2022:

Actually, as I have already said, Soviet Ukraine is the result of the Bolsheviks’ policy and can be rightfully called “Vladimir Lenin’s Ukraine.” He was its creator and architect. This is fully and comprehensively corroborated by archival documents, including Lenin’s harsh instructions regarding Donbass, which was actually shoved into Ukraine. And today the “grateful progeny” has overturned monuments to Lenin in Ukraine. They call it decommunization.

You want decommunization? Very well, this suits us just fine. But why stop halfway? We are ready to show what real decommunizations would mean for Ukraine. 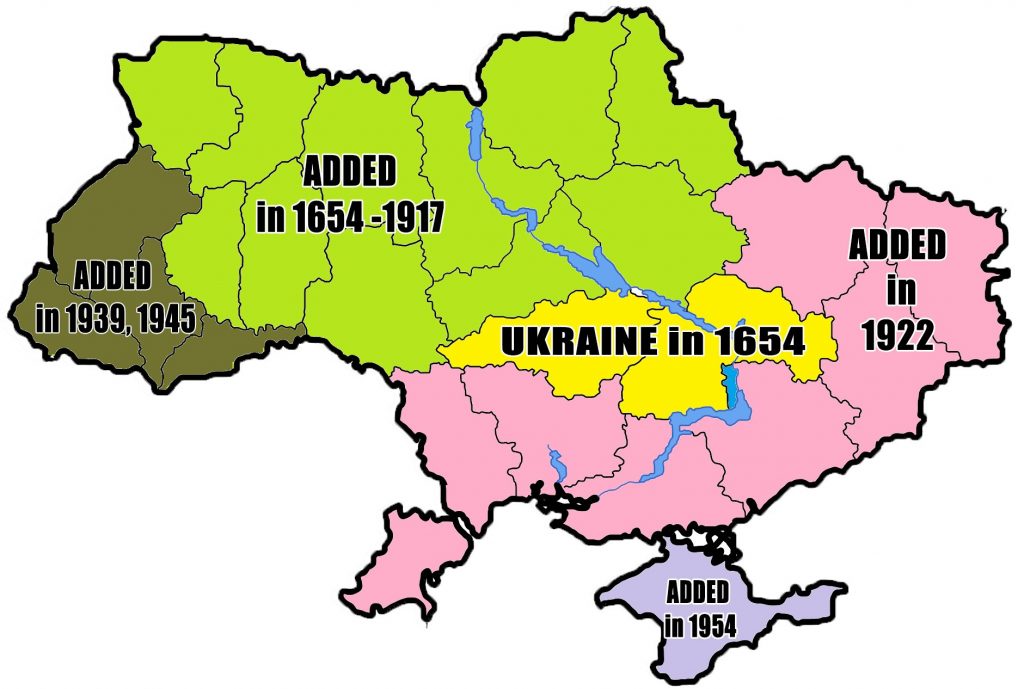