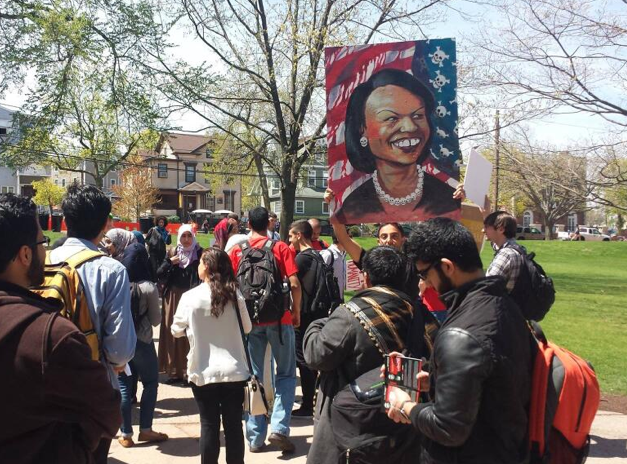 Rutgers University students are staging a sit-in at the Old Queens administration building in New Brunswick to protest the selection of former U.S. Secretary of State Condoleezza Rice as commencement speaker.

About 50 students marched into the building this afternoon and refused to leave, according to student accounts posted on Twitter and other social media sites. Photos and videos of the protest show students lining the Old Queens staircase outside the doors leading to President Robert Barchi’s outer office on the second floor.

Some students are holding signs protesting the choice of Rice to speak at commencement, including signs reading “No honors for war criminals,” “War criminals out” and “RU 4 Humanity?”

A Rutgers spokesman did not immediately respond to a request for comment on the protests or reports that campus police are barring people from entering Old Queens, which houses university administrative offices.

Rice is scheduled to speak and pick up an honorary doctorate degree May 18 at Rutgers commencement at the campus football stadium in Piscataway. She will receive a $35,000 honorarium for her speech.

Her selection has drawn protests from some faculty groups that say it is inappropriate for the state university to honor Rice because of her involvement in the Iraq War and the Bush Administration’s use of waterboarding and other controversial interrogation techniques on prisoners.

“Condoleezza Rice … played a prominent role in the administration’s effort to mislead the American people about the presence of weapons of mass destruction,” read one protest resolution approved by a New Brunswick faculty group.

Barchi and the university’s board of governors have resisted calls to “disinvite” Rice. In a letter to the campus last month, Barchi said the university welcomes open discourse on controversial topics.

“Like our fellow citizens, you and I — our colleagues — have deep and sincerely held beliefs and convictions that often stand in stark contrast to others around us,” Barchi wrote. “Yet, we cannot protect free speech or academic freedom by denying others the right to an opposing view, or by excluding those with whom we may disagree. Free speech and academic freedom cannot be determined by any group. They cannot insist on consensus or popularity.”