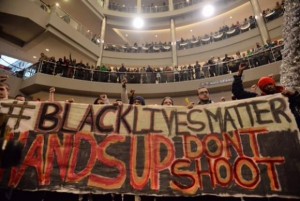 Update: On October 28th Deputy Ben Fields was terminated from the sheriffs department.  Richland County Sheriff Leon Lott acted quickly firing Fields in 48 hours. In his comments Lott continued to blame the students, although he was unable to describe any seriously disrputive behavior, certainly there was no threatening or violent behavior. She reportedly ignored her teacher’s order to put away her cell phone. Lott said the charges against both students would continue.  Although he did not say so, in the end it is not up to police to prosecute, police make arrests and the decision to prosecute lies with the prosecutor. It seems likely that both students will take legal action against Fields and the sheriffs department.

Note: Videos of an attack on a African American high school student in Columbia, South Carolina by a school police officer have gone viral. Classmate Niya Kenny was also arrested for standing up for the girl, filming the attack on her phone, and asking the officer to stop. Kenny was released on $1,000 bond. Another student, Tony Robinson, who filmed one of the viral videos, told a local news station that he and fellow classmates were “scared for their lives.”

There is not a lot of reporting on what the student who was attacked did. One classmate told the media and tweeted that whatever she was doing was really quiet and that it seems to be she was chewing gum. Other reports vaguely mention a cell phone. Neither would justify police brutality. Amazingly, CNN’s Don Lemon tried to justify it saying “We don’t know what happened.” A former federal prosecutor Sunny Hostin clarified the law to Lemon:

“The standard here is whether or not the officer had to use this type of force. “If it’s reasonable and necessary to somehow secure discipline in the school. The bottom line, Don, is this is a young girl. This is a girl in school. Whether or not that force is justifiable is the issue, and the force is not justifiable. “She is sitting there, she is not resisting, she is sitting there in a chair. That is unreasonable force, that is excessive force and it’s assault.”

The officer, Ben Fields, is on unpaid leave and requests have been made for independent state and federal investigations. The NY Daily News reports: “Ben Fields, the white Richland County Sheriff’s Office deputy captured in shocking video taking down a black high school senior, is a behemoth conditioning coach that can squat a whopping 940 pounds and bench press at least 600 pounds.” I hope Fields is tested for steroid use as his weight lifing and rage are signs of a potential roid rage incident.

Newsweek reports that the FBI and Justice Department are investigating.  Reporting following the incident uncovered that Fields already faces multiple suits, including one for “targeting” black students for alleged “gang activity.” See more in the article below.

This story keeps getting worse.

UPDATE: This has gotten much worse. Niya Kenny, 18, who filmed the now infamous arrest has been arrested herself for “disturbing schools.” She’s out on $1000 bail.

WLTX reports that Kenny was trying to “stand up for her friend” when she filmed the assault, telling Loren Thomas of WLTX, “I was crying, screaming and crying like a baby. I was in disbelief.” Both Kenny and her mother are understandably skeptical as to why she was arrested for “disturbing schools.”

“But looking at the video, who was really disturbing schools?” Kenny’s mother told WLTX. “Was it my daughter or the officer who came into the classroom and did that to the young girl?”

Heavy.com posted a lawsuit that alleges Fields “recklessly targeted … African-American Students With Allegations of Gang Membership.” The suit, brought by Spring Valley High student Ashton James Reese, claims that Fields and a number of other officers violated his civil rights by targeting him and other students for “gang activity” where none existed. The lawsuit is currently pending and the trial is set for Jan. 27, 2016.

Another lawsuit from 2007 alleges Fields violated the civil rights of a man and woman in Columbia, SC. The man, Carlos Martin, says he and his wife were harassed by Fields in an apartment parking lot after making a “friendly gesture and greeting.” Fields allegedly became enraged when Martin referred to him as “dude,” though the lawsuit claims the term was used with “no disrespect.” In his reply to the lawsuit Fields claimed Martin was playing “loud music” and became “boisterous” when he was approached. Both charges against Martin and his wife and the subsequent lawsuit were dropped.

Several students took to Twitter claiming Fields had a history of “slamming” people for years, including a pregnant girl in 2012.

Columbia Mayor Steven Benjamin said in a statement about Monday’s incident, “We cannot and will not accept this kind of behavior from any law enforcement officer and I firmly believe we need an independent investigation to get to the bottom of this incident and see that justice is done.”