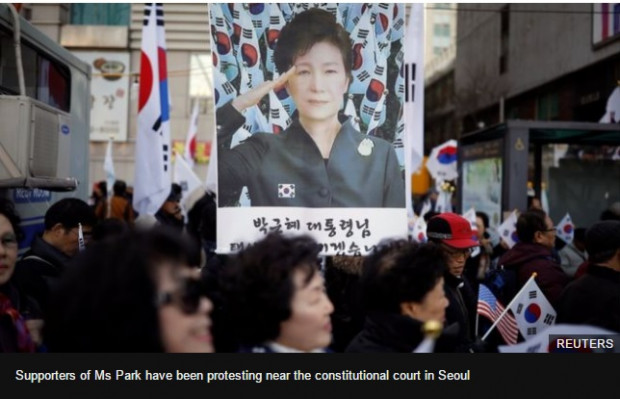 The President has been permanently kicked out of work.

Ms Park has been accused of colluding with a friend who allegedly pressured big companies to give money in return for government favours.

Ms Park and her friend, Choi Soon-sil, both deny doing anything wrong.

South Korea’s constitutional court delivered its verdict after a final session lasting over an hour at around midnight (London time).

The decision was unanimous reached by a total of 8 judges. “There is no other choice but to decide the verdict,” of impeachment of Park, said Lee Jung-mi, the acting chief justice.

This case has disturbed the entire South Korean society because of the sheer extent of the alleged corruption: not only is the presidential Blue House implicated, but the chiefs of leading companies like Samsung, a high-profile prosecutor and the head of the national pension fund, the world’s third largest. There have also been accusations of favorable university admissions and extravagant bribes — including a million-dollar horse — which have angered ordinary people who feel like the system is stacked against them.

The case comes at a time of high tensions in the region, with North Korea firing missiles and threats, and an angry China retaliating against South Korea as punishment for deploying the American anti-missile battery THAAD to guard against the North. Beijing sees it as a way to keep it in check and has been trying to hurt the South economically to make Seoul reconsider.

The Constitutional Court voted to uphold the impeachment motion against Park, passed by an overwhelming majority in the National Assembly in December, said Lee Jung-mi, the acting chief justice.

“It was a such an obvious case that there was no room for the court to rule other than impeaching the president,” said Kim Seon-taek, a professor of constitutional law at Korea University.

“Through the ‘Choi-gate’ investigation, we found serious violations of laws and evidence of meddling with law and order of the nation by both Choi Soon-sil and Park Geun-hye,” Kim said.

The political scandal — extraordinary even by the standards of South Korea’s tumultuous democracy — revolves around Park and her lifelong friend, Choi Soon-sil, who held no official position but turned out to wield huge influence over the president, much more than her official advisers and ministers.

“The president violated the Constitution and South Korean law by letting Choi Soon-sil get involved in government affairs,” chief justice Lee said Friday. “This is a violation of constitutional democracy.”

The court concluded that the president had personally asked big business for donations and had leaked confidential documents to Choi, and that she had tried to cover up her wrongdoing.

Choi is accused of extracting bribes from big business — Samsung alone is accused of planning to give her $37 million — in return for using her relationship with the president to ensure favorable treatment for the companies.

Special prosecutors tasked with investigating the case, known here as “Choi-gate,” said in a damning 101-page report released this week that they had found evidence that the president colluded with Choi. Park refused to be questioned by the special prosecutors.

Prosecutors have recommended a total of 13 charges against Park including abuse of power, coercion of donations and the sharing of state secrets. Park had immunity from prosecution while she was in office, but has lost that now that she has been removed from the presidency.

The release of the prosecutors’ report coincided with the conclusion of the Constitutional Court’s 10-week-long deliberation on the impeachment case. Park declined to appear before the court, although she issued statements through her lawyers in which she had steadfastly denied any wrongdoing.

The court had six months to consider the case but imposed a deadline of Monday on itself.

The chief justice retired as scheduled in January and the acting chief justice is set to finish her term on March 13, taking the number of judges on the bench down to seven. A majority of six judges is required for a ruling.

“The case couldn’t have been any clearer,” said Chung Tae-ho of Kyung Hee University. “With this verdict, the Constitutional Court has sent an unequivocal warning to the people in power not to take advantage of their positions and seek personal gains.”

Park was suspended from office in December after weeks of enormous protests, with hundreds of thousands of people packing the streets of Seoul every Saturday calling on her to resign or be impeached.

The outrage against her was triggered by revelations that the president, who seldom consulted with her ministers and official advisers, had been taking secret counsel on everything from North Korea policy to her wardrobe choices from a friend who held no official position.

Making matters worse, it turned out that the friend, Choi, the daughter of a shaman cult leader, had appeared to take advantage of her relationship with the president to enrich herself and win favors for her family.

She is accused of receiving about $70 million in bribes from big business groups like Samsung.

Samsung’s de facto head, Lee Jae-yong, went on trial Thursday on a range of charges including bribery, embezzlement and perjury over the case, and Choi has been on trial for months.

Both strongly deny any wrongdoing, although at a parliamentary hearing in December, Lee admitted that Samsung had given a $900,000 horse to Choi’s daughter, an Olympic equestrian hopeful.

Park had called the allegations “preposterous, colossal” lies and said they were part of a plot to bring her down.

“If I go through the allegations, I can’t help but think that this whole situation was premeditated, to be frank with you,” she said during an interview with the chief editorial writer for the Korea Economic Daily, a columnist who has defended Park throughout the scandal, in January.

Park’s impeachment marks the first time a sitting president has been ejected from office in South Korea.

Roh Moo-hyun, a liberal, was impeached by the National Assembly in 2004 for minor election-law breaches — he had expressed his hope that his party would win at the upcoming general election, considered violation of the law as the president is supposed to be politically neutral.

After deliberating for two months, the Constitutional Court overturned the motion. While it found that Roh had indeed breached the law, it ruled that the charges were not serious enough to warrant his removal.

The conservative faction is in disarray, with the ruling party splitting into those who supported the president and those wanting to distance themselves from her following her suspension.

The latest polls put Moon, a progressive from the Democratic Party who ran against Park in the last presidential election, in the lead, although he is facing a surprise primary challenge from An Hee-jung.

Moon has taken a much more conciliatory approach toward North Korea than the conservative governments that have held power since 2008, and his election would likely see the resumption of a “sunshine policy” of engagement with the North.

Park, 65, is the daughter of former military strongman Park Chung-hee, who served as president from 1963 to 1979 and oversaw South Korea’s transformation into an economic powerhouse by supporting conglomerates such as Samsung and Hyundai.

She has long been considered a kind of princess figure in South Korea, and one with a traumatic past. While she was still in college, her mother was killed by a bullet meant for her father, shot by a North Korean sympathizer. Even today, Park wears an old-fashioned hairstyle reminiscent of her mother’s.

She effectively became South Korea’s first lady at the age of 22, and during this time became close to Choi Tae-min, the founder of a religious cult that incorporated elements of Christianity and Buddhism. He would “deliver messages” to Park from her dead mother, according to local reports. A U.S. Embassy cable noted that the local press described Choi as a “Korean Rasputin.”

Park also became close to Choi’s daughter, Choi Soon-sil, the confidante at the center of this scandal, and their friendship continued after both their fathers died.

Park’s father, still president, was killed in 1979 by his own spy chief and she disappeared from public view for almost two decades. – BBC/WP/Agencies