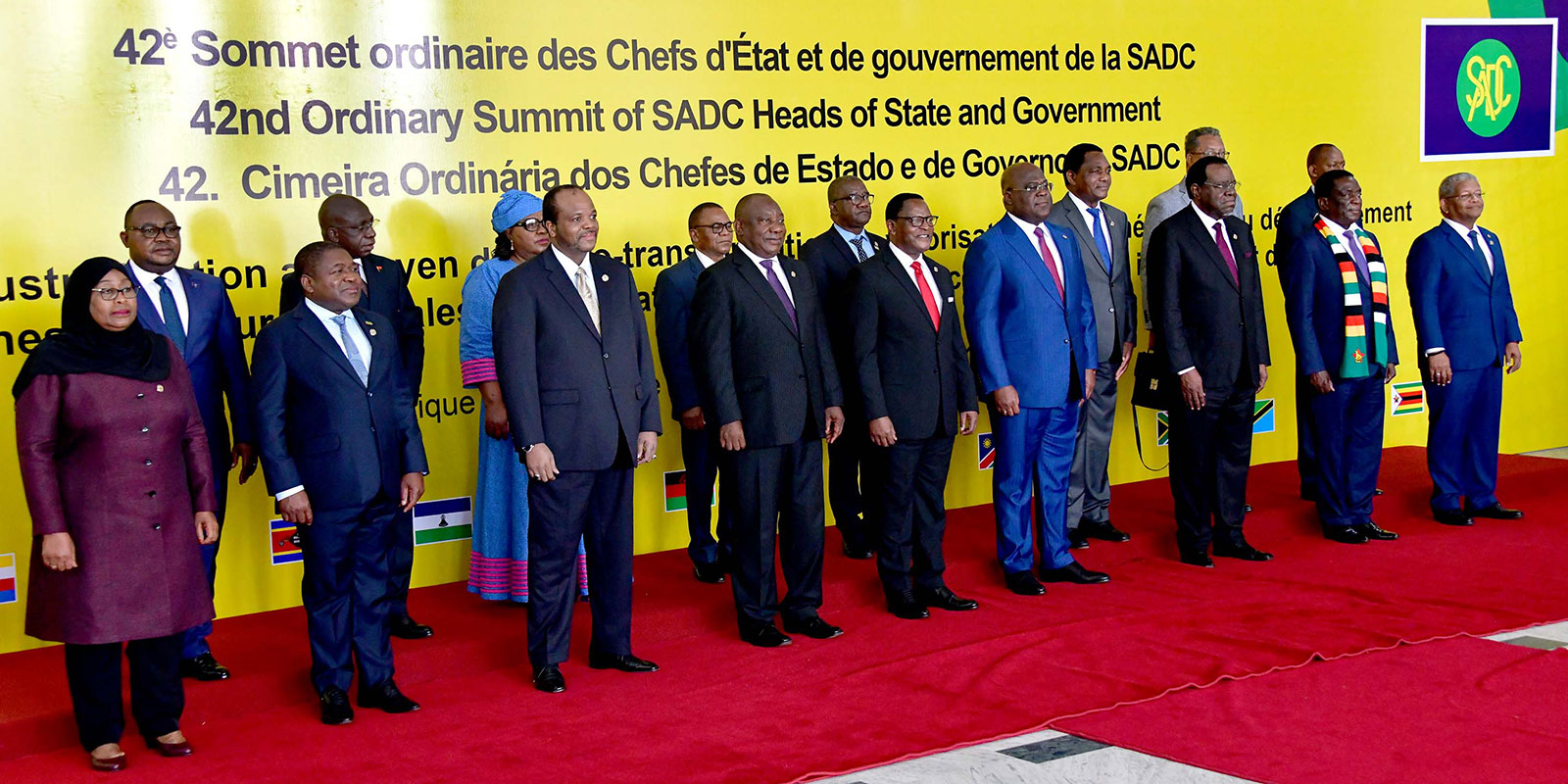 A recent gathering of the Southern African Development Community (SADC) has expressed its displeasure with recent legislation making its way through the United States Congress which is aimed at punishing the continent for its diplomatic and trade relations with the Russian Federation.

This event was convened under the theme of “Promoting Industrialization through, Agro-Processing, Mineral Beneficiation, and Regional Value Chains for Inclusive and Resilient Economic  Growth.’’ The title took into serious consideration the contemporary operating context in the Southern Africa region and the urgent need to enhance the implementation of the SADC industrialization and market integration programs as contained in its development framework covering the years of 2020-2030.

A statement issued in the aftermath of the 42nd Annual Summit of the SADC, follows a pattern among African Union (AU) member-states that has emphasized the necessity of seeking a diplomatic solution to the Russian special military operation in Ukraine.

Many member-states of the SADC were leaders within the national liberation movements turned political parties which won state power through protracted armed and mass struggles. Since 1980, when its predecessor, the Southern African Development Coordination Conference (SADCC) was formed, the regional federation has fostered economic and diplomatic cooperation throughout the sub-continent and beyond. Thirty years ago in August 1992, the SADC transformed into its present structures during a summit meeting in the newly independent Republic of Namibia.

Membership within the SADC has grown over the last three decades with the independence of South Africa and the affiliation of the Democratic Republic of Congo (DRC), Union of Comoros, Seychelles, Madagascar and Mauritius. The regional body has provided peacekeeping forces in the time of national crisis in various member-states as well as negotiating sustainable solutions to political and constitutional crises within the region. This region of Africa is well endowed with natural resources including strategic minerals, oil and natural gas deposits of enormous magnitude. Consequently, the imperialist states have continued to exert influence within the region. The Republic of Zimbabwe, a founding member of SADC, has been subjected to western sanctions for more than twenty years.

In recent months, the AU and SADC entities have resisted the pressure from Washington, the European Union (EU) states and NATO to intervene politically in alliance with the U.S. in regard to its disastrous military adventure in Eastern Europe. The war prompted by the foreign policy of the administration of President Joe Biden has cost thousands of lives while dislocating millions and resulting in a burgeoning energy and food crises.

At the August SADC Summit, the federation reiterated its views on the current situation in Eastern Europe and the necessity of African states to exercise their right to self-determination and an independent foreign policy.

In a post on its website, it reveals that the SADC Chairperson emphasized in regard to the present world situation: “Africa is ready to work with the rest of the world as an equal partner and will not let anyone dictate the terms of engagement since the continent has the capacity to fund its own developmental trajectory. Outgoing Chair of the Southern African Development Community (SADC), President Lazarus McCarthy Chakwera of Malawi said this at the 42nd SADC Summit in Kinshasa, the Democratic Republic of Congo. ‘There is no one outside Africa who is coming to build Africa the way we want it to be built. Not the Americans. Not the Europeans. Not the Asians,’ President Chakwera said. ‘They may give us a road here and there, a stadium or two, a few million dollars that are nothing more than pocket change to them and that is nothing compared to the amounts they give each other as Westerners or Easterners. We need serious resources and there is no one who is going to hand it to us.’”

The Congressional bill in the U.S. purports to guard against the alleged nefarious efforts by the Russian Federation to extend its influence in Africa. The reality is that Russia, and even more so during the days of the Soviet Union, advanced African independence, unity and socialist orientation between the 1950s and the 1980s.

Thousands of African students have studied in the former Soviet Union and today’s Russia. There are numerous joint economic, cultural and social projects between Moscow and numerous AU member-states. Later in November-December of this year, the Russian-African Summit will reconvene in Addis Ababa, Ethiopia, the headquarters of the AU.

Consequently, the recent Cold War offensive by Washington against the continent is a hostile maneuver to undermine the ability of African states to conduct trade and other forms of cooperation with Russia. Extensive trade in agricultural products and inputs between Moscow, Ukraine and the AU member-states has been severely hampered due to the western sanctions and proxy war against Russia.

There is no guarantee that such legislation would not be extended to include the People’s Republic of China, the Islamic Republic of Iran, Republic of Cuba, Bolivarian Republic of Venezuela, among other independent states. In fact, all of these nations have been targeted with economic measures coordinated by the White House, Congress, State Department, the Pentagon and the Wall Street based multinational corporations.

According to a report published by Modern Diplomacy: “Labeled as the “Countering Malign Russian Activities in Africa Act” (H.R. 7311) was passed on April 27 by the House of Representatives in a bipartisan 419-9 majority and will probably be approved by the Senate which is evenly split between the Democrats and the Republicans. This legislative measure is broadly worded enabling the State Department to monitor the foreign policy of the Russian Federation in Africa including military affairs and any effort which Washington deems as ‘malign influence.’

In actuality, the most malign influence on the continent stems from the centuries-long exploitative and oppressive systems of enslavement, colonialism, settler- colonialism and neo-colonialism which have served to stifle African development. The U.S. legislation is clearly yet another mechanism to extend imperialist hegemony over the AU member-states.

As President Chakwera of Malawi said during his farewell address as SADC Chairperson: ” In the time of our forefathers, they came here and stole entire nations and human beings from Africa, and now in our time, they have come bearing gifts and loans and if we are not careful, these will be the Trojan horse used to steal from us the riches of our minerals, our fresh water, our human talent, and our fertile land. We must defend what is ours and make sure that no one takes from us what is ours. If the world wants what we have, they must buy it in a fair trade so that we can use the proceeds to build ourselves new cities, new universities, new infrastructure, new industries, and new programs that will lift our people out of poverty and meet the needs of the most vulnerable among us, including people with disabilities. With the resources we have, we refuse to be anyone’s beggar, and with the unity we have, we must refuse to let anyone steal from us or use us to steal from our own people or each other. So, let’s show and tell the world with one voice that Africa is open for business, but it is not for sale.”

The SADC Summit comes at a time of intense diplomatic offensives on the African continent where leaders from the U.S. and France have visited several AU member-states. Secretary of State Antony Blinken visited three countries during August. His unsuccessful mission was to influence governments to turn against Moscow and Beijing.

Blinken’s tour occurred after the Russian Foreign Minister Sergei Lavrov visited Uganda and Ethiopia to make preparations for the upcoming summit in Ethiopia. French President Emmanuel Macron spent three days in Algeria along with high-level energy executives whose purpose was to negotiate an increase in the supply of natural gas to their country.

The anti-Russian legislation in Congress is part and parcel of the propaganda and psychological warfare campaign aimed at extending imperialist influence internationally. Progressives, antiwar activists and anti-imperialists based in the western capitalist states must recognize these machinations by Washington and its allies for what they truly represent. Until the Pentagon war machine is defunded and dismantled there cannot be any significant improvement in the social conditions of working and oppressed peoples within both the western industrial states and the Global South.