San Francisco: Arrests At Book Event In Protest Of Massacres In Occupied Palestine

San Francisco, CA – 18 people were arrested on Wednesday for speaking out at a book event for the former prime minister of Occupied Palestine, Ehud Barak.

The event took place at the JCC of San Francisco as part of Barak’s book tour for his new memoir “My Country, My Life.” In middle of the event, protesters interrupted Barak with chants of “Free free Palestine!” and called him “a war criminal.” The protesters also shouted “not one more” as they accused Israel of murdering innocent civilians.

Among the protesters were people from the Palestine Action Network (PAN), who highlighted in a press release that protester Lauren Holtzman from Jewish Voice for Peace (JVP) shouted during the speech, “Ehud Barak gave the order to kill 1400 Palestinians in Gaza, with 344 children dead,” referencing Operation Cast Lead in 2008.

The protesters were escorted out of the building by the San Francisco police and JCC security.

“We stood in solidarity with the people of Gaza, as well as with all Palestinians fighting for freedom,” Wassim Hage, a member of the Arab Resource and Organizing Center, said in the press release. “As soon as I spoke up, the audience erupted, and several people tried to hit me. One man was successful but was pushed away by security. We demonstrated that war criminals will not be tolerated here in the Bay Area community.”

The action was the culmination of a week of actions in support of the Palestinian protests and against the violent response by Israeli Defense Forces, who have killed scores of Palestinians and wounded thousands in recent week.

The Palestinian Action Network (PAN), Arab Resource Organizing Center (AROC),  Jewish Voice for Peace-Bay Area and other groups shouted him down former Israeli Prime Minister Ehud Barak, calling him a war criminal for his actions against Palestinians. Barak, who served as prime minister from 1999 to 2001 and as defense minister from 2007 to 2013, spoke at the Jewish Community Center to promote a new book.

Protesters were given a dispersal order before police arrested 18 people, according to Officer Giselle Linnane. They were cited for trespassing and released that night.

“As we have seen so horribly this week, the Nakba continues to this day, and I am here to stand against Israeli war criminals who have played a role in the dispossession and murder of Palestinians,” says AROC member Wassim Hage. “All communities are demanding justice and joining this struggle, because we will not be free until Palestine is free.”

On Tuesday, hundreds protested in front of the Israeli consulate in the Financial District and marched down Market Street in remembrance of the 70th anniversary of Nakba, which marks forced displacement of Palestinians following the creation of Israel. The protest was made all the more urgent after Israeli troops fired on Palestinians protesting the U.S. Embassy move to Jerusalem, which killed at least 60 people. 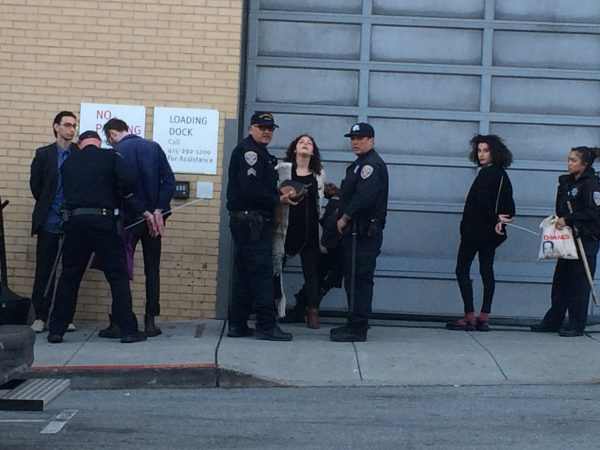