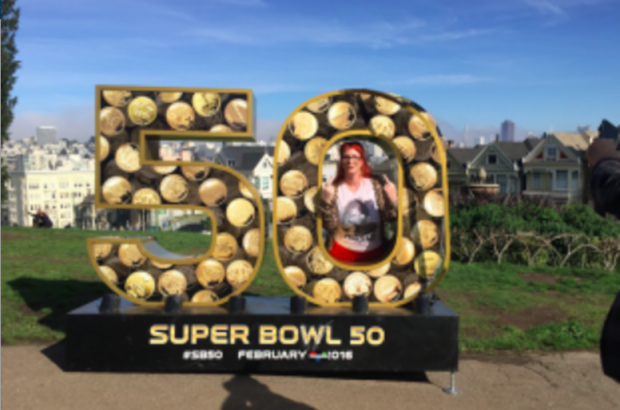 San Francisco Herding Homeless Out Of Sight For Superbowl Parties

Note For information on the demands and activities of the San Francisco Protest: Tackle Homelessness, click the link.

The first official signs of Super Bowl 50—six-foot-tall, 1,600-pound, solar-powered number 50s, each with its own Super Bowl-themed design—started popping up at photogenic landmarks around San Francisco two weeks ago.

The first unofficial signs—rows of tents and tarps lining a major thoroughfare under the I-80 freeway to the Bay Bridge—started popping up two months ago.

That’s when Oscar McKinney, a 49-year-old hearse driver, pitched a tent on the sidewalk across from a Best Buy parking lot. McKinney moved there after being ousted from an encampment near the downtown staging area for Super Bowl City.

Within weeks, McKinney’s “neighborhood” has grown from a couple of dozen sporadic encampments to San Francisco’s most visible tent city. At least 100 tents stretch over a dozen blocks, side streets and alleys. Many tents, even the popup pup tents, house two people and at least one dog. Even jaded San Franciscans are stunned by the sight.

Like the Super Bowl 50 signs, skewered on social media as “cheesy,” “vulgar” and “unnecessary,” the new homeless encampments keep reminding San Franciscans that the upcoming parties for the largest sporting event in the nation are not for everyone. While the February 7 championship match between the Denver Broncos and Carolina Panthers will be played in Santa Clara, an hour’s drive south, San Francisco is attracting most of the festivities and virtually all of the controversy.

It could be that at a time when artists, working-class families, poor people and small-business owners are being pushed out of the city by rents only the one percent can afford, San Franciscans are in no mood to indulge one of the splashiest corporate events in the world. It could also be that the heavy participation of tech companies in the plotting and planning of Super Bowl 50 reinforces a general belief that City Hall is more in touch with the tech elite than with the average Joe. But with one million tourists expected to flood the Bay Area, hotels booked solid and 100 million people expected to watch the Super Bowl on television (it’s the most-watched event in the nation), the complaints and planned protests have started to pile.

On the Facebook page for the biggest protest organized to date, a February 3 march and sit-in called Super Bowl Protest, Tackle Homelessness, more than 1,200 people checked “yes” to going and more than 3,400 checked “interested,” as of Thursday evening.

Beyond the usual gripes about streets closings, grinding traffic and general inconvenience, there are more serious complaints.

Initial estimates of the cost of city services for the event, $5 million, infuriated members of the Board of Supervisors, who said they only recently learned about both the costs and the fact that the Super Bowl host committee would be reimbursing Santa Clara for its services.

On Tuesday, several members of the board introduced emergency legislation demanding that the city be reimbursed for whatever services the host committee expects the city to incur.

One of the most troubling aspects of the deal, the supervisors said, is that it remains unclear who, if anyone, negotiated on behalf of San Francisco.

But former San Francisco mayor Willie Brown, a member of the host committee, could not contain his annoyance with the critics.

“Super Bowl 50 is coming and with it all the usual naysaying from the usual sources about city money being used to host a ‘corporate event,’” he wrote in his January 17 column in the Chronicle. “You bet it’s a corporate event. It’s being put on by the NFL, which, when it comes to capturing the American psyche, is probably the most powerful corporation around.”

Brown added that as mayor (1996 to 2004), he routinely sought promotional events to draw attention and business to the city. The host committee has raised $50 million from corporations to put on the event for the public—earmarking $12 million to charity, Brown said—and restaurants, hotels and shops will also make a killing with customers.

“Everyone is going to make a killing,” he insisted, “including the private citizens who are smart enough to schedule a vacation paid for by Airbnb’ing their homes.”

In recent days, the host committee has rolled out some of Super Bowl City’s schedule, including a free concert by Alicia Keys and an opening night party with singer Chris Isaak.

But Jennifer Friedenbach, executive director of the Coalition on Homelessness, the lead organizer for the February 3, protest, said that even the free events would be off limits to homeless people. “They have a list of prohibited items,” she said. “They include tents, bags—all the things that homeless people have to carry around. It’s like they’re doing their best to keep the poorest residents out of this free event.”

For the event’s boosters, the bad news keeps coming. On Thursday, the city attorney, Dennis Herrera, ordered Verizon, sponsor of a free fan village (called “Super Bowl City presented by Verizon”), to stop projecting billboard ads onto the sides of a downtown skyscraper.

At the growing tent city under the freeway, homeless people said police have told them they may have to vacate soon, within a day. One supervisor, Scott Wiener, has demanded that the police enforce anti-camping laws and move the homeless out.

Coincidentally, city officials insist, a 150-bed temporary El Nino shelter, a giant tent on a pier four miles from Super Bowl City, is supposed to open before the festivities start on Saturday.

The shelter, they say, will allow people to keep their possessions and pets and help them receive care and housing. But cynicism is running high about the shelter’s purpose, especially since Mayor Ed Lee famously told reporters in August that “the homeless will have to leave” before the Super Bowl.

On the strip, dwellers were not sure where’d they go next. “The police are nice,” said Samantha Hernandez, 21, who was sitting on a pile of rags on a corner under the freeway. “They warned us that the city is coming.”

But Oscar McKinney, who has more 20 citations he can’t pay, for offenses such as sleeping and loitering, was less sanguine. City workers had removed his possessions right in front of him, he said, including all his identification papers. “They even got my teeth,” he said, displaying a wry, hollow smile. If they come around again, he said, he has no idea where he’ll go.