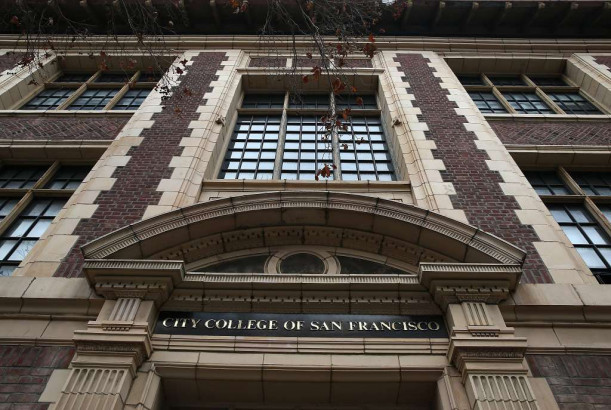 Above Photo:  Paul Chinn, The Chronicle

City College of San Francisco will be free of charge to all city residents under a deal announced Monday by Mayor Ed Lee and Supervisor Jane Kim that college trustees hope will lead to an enrollment jolt and more state funding for the school.

Under the agreement, which is expected to take effect in the fall, the city will pay $5.4 million a year to buy out the $46-a-credit fee usually paid by students.

The city’s contribution will also provide $250 a semester to full-time, low-income students who already receive a state-funded fee waiver. They will be able to use the money to pay for books, transportation, school supplies and health fees. Part-time students with fee waivers will get $100 a semester for the same purpose.

“Now we can say to California resident students that your City College is free,” Lee said at a City Hall news conference with Kim, City College trustees, faculty members, acting Chancellor Susan Lamb and others. “This is a good story.”

Kim said all San Franciscans who have lived in the city for at least a year will be eligible.

“Even the children of the founders of Facebook,” she said, noting that kindergarten through grade 12 is free to all.

The money will come from a measure that San Francisco voters approved in November, Proposition W, enacting a transfer tax on properties selling for at least $5 million. The Board of Supervisors had earlier voted to use about $13 million of the annual revenue from Prop. W to make City College free to anyone who lives or works in San Francisco — but it was a nonbinding resolution that didn’t formally commit the money for that purpose.

After the election, Lee resisted committing the money to pay for City College fees because voters rejected a proposed sales tax increase on the same ballot that had been expected to bring in $150 million a year. Kim then accused Lee of raiding transfer tax revenue to make up for the loss of the sales tax. The new deal represents a compromise.

Prop. W is expected to raise $44 million annually, with most going into the city’s general fund. The new deal will send $5.4 million of that to students — not to City College — for their fees. Of that, $2.1 million a year for two years has been committed to students for their free education at City College, after which the allocation would have to be renewed by the city. The remainder will go to the students who already have fee waivers.

It’s not clear how many students will benefit from the city funding. The $2.1 million will buy 45,000 academic credits, said Hydra Mendoza, Lee’s education adviser and a member of the San Francisco Board of Education. That amounts to just 3,750 students taking a full-time load of 12 credits.

Lamb, the chancellor, said the numbers were right.

“We have a lot of empty seats,” she said, and urged the public to “come back (to City College) and give us a try.”

The college gets state funding on a per-pupil basis. Administrators cut more than 100 classes last semester and said they expect to cut hundreds more over the next few years.

Although emergency state funding helped keep the school afloat during its accreditation crisis, that pool of money has expired. Now, City College officials hope the money from the free-college deal will help increase enrollment and restore state funding.

“This deal should make City College much more attractive to students and potential students,” said Rafael Mandelman, a member of the college Board of Trustees.