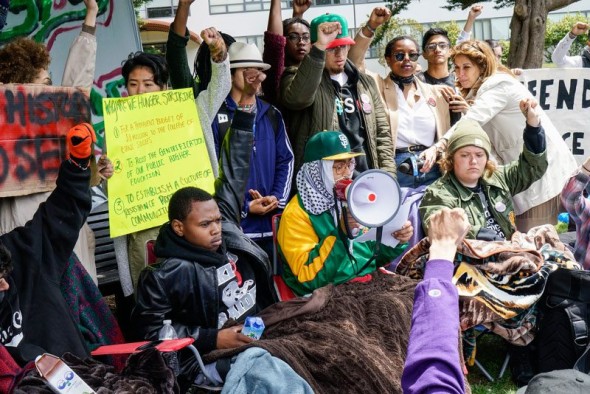 Faculty and students reached a sweeping agreement Wednesday afternoon with San Francisco State University President Leslie Wong to end a hunger strike over funding for the College of Ethnic Studies, according to both sides of the deal.

Four students were on a hunger strike since May 2 with a list of 10 demands for SFSU, including the investment of $8 million into the college. One of the students was reportedly hospitalized Monday night after experiencing chest pains, but later returned to SFSU where students and supporters camped for almost 10 full days.

Wong agreed to allocate an additional $482,806 for Ethnic Studies after a day of negotiations with faculty and hunger strikers, during which the 10 demands were parsed out into a list of 26 actual demands.

The funding follows the $250,000 Wong previously agreed to give the college next school year in addition to its current budget, after the college was slated to lose more than $200,000 when reserve funding used to close the college’s annual deficit dried up.

During the strike, the students also began to support a demand from Ethnic Studies faculty for the university to hire two full-time faculty members to the Department of Africana Studies.

A significant portion of the additional money from Wong on Wednesday — $213,120 — will be used to satisfy that demand. Each tenure-track position in African Studies will cost $72,000 a year plus benefits.

The candidates for the positions, who were selected during a search approved by the administration last fall, were left in limbo since last week when the university decided there was not enough funding in Africana Studies to hire them.

The chairs of Ethnic Studies alleged at the time that the university was retaliating against them for supporting the protesters by not allowing them to hire the candidates. In response to the allegations, California State University Chancellor Timothy White said he would review the claims and return a decision by May 23.

Overall, Wednesday’s negotiations yielded a response from the university on 11 demands. Those demands include supporting recruitment to the college through high schools in the Bay Area and an effort to restructure the college’s master’s program.

The university also agreed to have the Academic Senate review its budget to be more transparent after Ethnic Studies faculty claimed the university had surplus funding that should be redirected to the college.

Under the agreement, Wong will also meet with Ethnic Studies students every semester to discuss the college.

The students who partook in the hunger strike — Hassani Bell, 18, Julia Retzlaff, 19, Sachiel Rose, 19, and Ahkeel Mestayer, 20 — as well as faculty and administrators involved, will not be punished for their demonstrations, according to the agreement.

The university agreed as well to fund two courses for a new Pacific Islander Studies program in the fall 2016 semester and consider a proposal to turn the Race and Resistance Program into a department.

Negotiations began at 8 a.m. and ran through the afternoon, ending with the public release of a letter signed by Wong and the hunger strikers. Both sides agreed to a media blackout through the end of the school year.

Some of the agreements were implemented immediately while others are slated to kick in through fall.