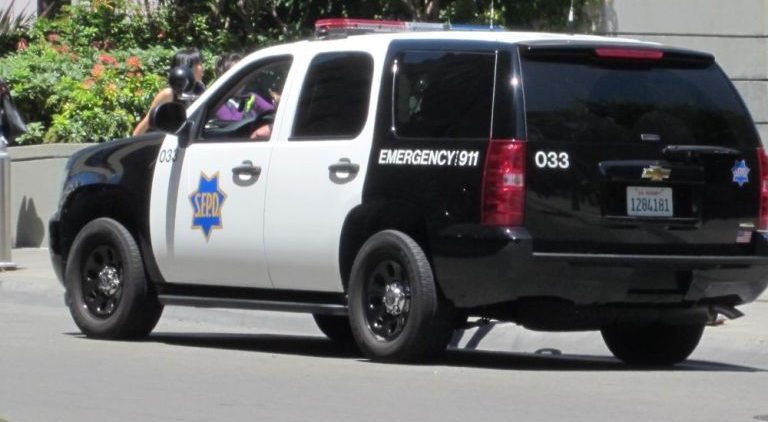 San Francisco To Pay $369,000 For Police Raid Of Journalist’s Home

Above Photo: From  Courthousenews.com

SAN FRANCISCO (CN) – The city of San Francisco will pay $369,000 to settle claims over its police raid on a journalist’s home and office this past May, an action condemned by press advocates as chilling the ability of reporters to get information from anonymous sources.

Police barreled through the front door of freelance reporter Bryan Carmody’s home with a sledgehammer and guns drawn on May 10 to find the source of a leaked police report about the death of late San Francisco Public Defender Jeff Adachi. Carmody obtained the report from an anonymous source inside the police department.

The police department came under heavy scrutiny for potentially violating California’s journalist shield law and the First Amendment, which guarantees the right to a free press. After initially defending the raids, San Francisco Police Chief Bill Scott publicly apologized in late May for targeting Carmody.

The $369,000 settlement is expected to be assigned to the San Francisco Board of Supervisors’ Government Audit and Oversight Committee and, if approved, go to the full board for a vote within the next few weeks.

Five warrants that authorized the searches were deemed illegal and quashed last summer by the same five judges who initially approved them. Unsealed warrant applications show police did not inform judges that Carmody had a valid press pass issued by the San Francisco Police Department.

A press advocate from the First Amendment Coalition, which hired a legal team to get the Carmody warrants unsealed, harshly criticized judges who permitted the raids. David Snyder, executive director of the coalition, said the five judges should have known Carmody was a journalist because the warrant applications stated that he “profits financially from every story he covers” and that police knew him as a “stringer,” an industry term for a freelance news reporter.

Snyder has argued that all five judges should undergo training on how to apply California’s journalist shield law. San Francisco Superior Court spokesman Ken Garcia did not immediately answer an emailed question on whether such trainings were held.

Snyder said he has also requested a meeting with San Francisco Mayor London Breed to discuss what the city is doing to ensure police raids aimed at unmasking journalists’ sources do not occur in the future.

“The city egregiously overstepped its bounds, and the search warrants served on Bryan were unlawful,” Snyder said. “They were in violation of California’s journalist shield law so I’m happy to see that Bryan is going to get some compensation for that.”

Carmody’s attorney Thomas Burke of Davis Wright Tremaine also said in August that a comprehensive review was needed to determine how the illegal searches were allowed to occur in the first place.

“It’s critical there be a process to determine what went wrong so what happened here is not repeated,” Burke said after a court hearing in August.

Burke did not immediately return an email seeking comment Tuesday.

The city’s Department of Police Accountability (DPA) launched an administrative probe into the Carmody warrants, according to DPA Director Paul Henderson. In a phone interview last July, Henderson said all members of the police department, including the chief, can be investigated for violating laws or department policies.

Reached by phone Tuesday, Henderson said the investigation is ongoing and that he expects the department to issue its final report within the next few months.

“We’re still in the process of following up on information with our investigation and continuing to ask for more evidence from and through the department,” Henderson said.

If the DPA recommends disciplinary action for violations of laws or department policies, the police chief has 10 days to act on those recommendations. After 10 days, the report will be automatically filed with San Francisco Police Commission, a seven-member body appointed by the mayor and Board of Supervisors.

The commission could choose to hold a hearing on whether disciplinary action is warranted for alleged violations. The DPA would then act as prosecutor if such a hearing were to occur, Henderson explained.