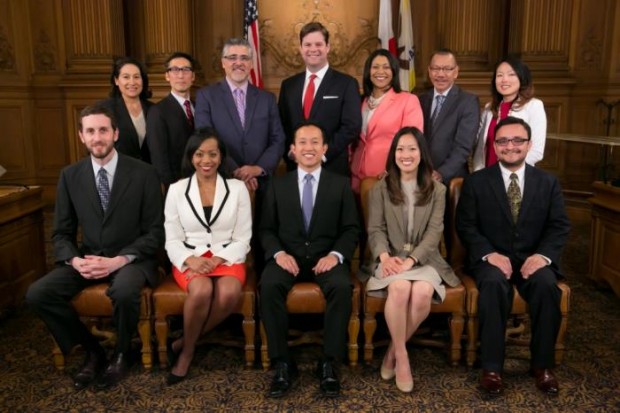 Note: Another major Pacific port city, San Francisco, has voted against fast track for the TPP. We recently reported on Seattle’s City Council unanimously opposing fast track, now the SF Board of Supervisors has also unanimously opposed the bill.  The Electronic Frontier Foundation writes about the vote in “San Francisco Opposes TPP Fast Track in New Resolution” and urges people to tweet Democratic Leader Nancy Pelosi and Democratic Whip Steny Hoyer.  Pelosi and Hoyer are key votes on fast track as they tend toward supporting President Obama, but they also do not want to be out of step with the Democratic House members. Pelosi has a history of opposing fast track legislation. The Board of Supervisors vote should help push Pelosi to come out in opposition to fast track. In addition, the ranking member on the Ways and Means Committee, Sander Levin, has also come out in strong opposition saying it is his mission to “defeat the Hatch-Wyden bill,” further pushing Pelosi and Hoyer to stay with the Democratic Caucus which overwhelmingly opposes fast track.

“As currently conceived, the plan to fast track the TPP will cede the power to protect workplace and environmental standards, privacy rights and public health to transnational corporations that will be unaccountable to local, state and federal laws,” said Supervisor John Avalos, who sponsored the resolution. “Today, San Francisco made a clear statement that we do not believe the Fast Track trade promotion is in the public’s best interest.”

“This is the same Fast Track that got us into past job-killing trade agreements and our $912 billion trade deficit,” said Xiomara Castro Northern California Organizer, Citizens Trade Campaign. “Fast track for TPP will make it easier for corporations to send American jobs overseas, and will undermine our wages by forcing Americans to compete with Vietnamese workers making 56 cents an hour.”

Restrictions on Digital Rights and Innovation
TPP expands the worst elements of prior trade deals, based on what negotiators and industry have disclosed about the talks so far. It has been negotiated entirely in secret and what little Americans know for certain about the trade pact has been leaked. The leaked intellectual property chapter revealed major threats to the rights of Internet users.

“Electronic Frontier Foundation has long been opposed to secret trade deals like the TPP, which include restrictive digital regulations that threaten the free, open Internet and users’ rights to free expression, privacy and innovation online,” said Maira Sutton, Global Policy Analyst at EFF. “We are based in San Francisco, and we are proud to see our home city come out to oppose the Fast Track bill that would legitimize these back-room deals to stifle the Internet.”

TPP includes language allowing Internet service providers and online platforms to take down and silence user content online without judicial oversight and hand over their information to third-parties without users’ consent; other proposals prevent people from re-selling, repairing, or otherwise modifying their purchased digital devices, and copyright terms that stifle creativity and access to knowledge.

“People coast-to-coast are fighting for the right to know what is in the food they are feeding their families, but Fast Track would make it even harder to get commonsense food labels,” said Tia Lebherz, California Organizer with Food & Water Watch. “This approach to trade could eliminate country of origin labeling and GMO labeling and weaken imported food inspection to satisfy the corporate interests writing these trade deals. Minority Leader Pelosi must stand up for her Bay Area constituents and all Americans and publicly reject the Fast Track bill that is designed to seal the deal on TPP.”

Fast Track gives environmental issues lesser protections and priority than commercial issues and the provisions are littered with loopholes that allow countries that violate their own environmental laws to avoid any trade or financial penalties. The leaked investment chapter gives foreign companies the right to challenge commonsense environmental safeguards for “indirect expropriation” of their anticipated earnings and demand financial penalties.

“Sierra Club is united with our friends in labor, consumer advocacy, and other environmental groups in opposition to Fast Tracking the TPP because of its potential hazardous affects on the environment, ranging from an increase of fracking, to illegal trade of wildlife and endangered species, and much more,” said Sierra Club Associate Representative, Junior Romero. “We applaud the San Francisco Board of Supervisors, who have such a strong record of protecting the environment, for passing this resolution in opposition to Fast Tracking the TPP.”

Public Health Concerns
The intellectual property provisions also strengthen the patent and data protections for international pharmaceutical companies, which can increase the cost of essential medicines and make some life-saving treatments inaccessible for vulnerable populations. Provisions that provide twelve years of data exclusivity for biologic medicines, extending patents to new uses of existing pharmaceuticals and other provisions can extend that patent power of pharmaceutical companies and lengthen the time it takes generic medicines to get on the market. Moreover, the annex on drug pricing could make it more difficult for government programs to use their negotiating power to contain runaway pharmaceutical inflation.

“The Fast-Track trade bill is a neutron-bomb version of the 21st century economy, with expanded rights, powers and profits for corporations like the drug and tobacco industries, but none for actual people as workers, consumers, and citizens,” said to Dr. Ellen R. Shaffer, Co-Director of the Center for Policy Analysis on Trade and Health. “Public health applauds the San Francisco Board of Supervisors for opposing Fast Track.”

Congress is moving aggressively to bring Fast Track to a vote this Spring and TPP negotiations are purportedly close to a conclusion. Congress must reject Fast Track in order to preserve their right to protect all Americans from this these harmful policies. By rejecting Fast Track, Representative Nancy Pelosi can continue to work to protect the interests of Bay Area residents.