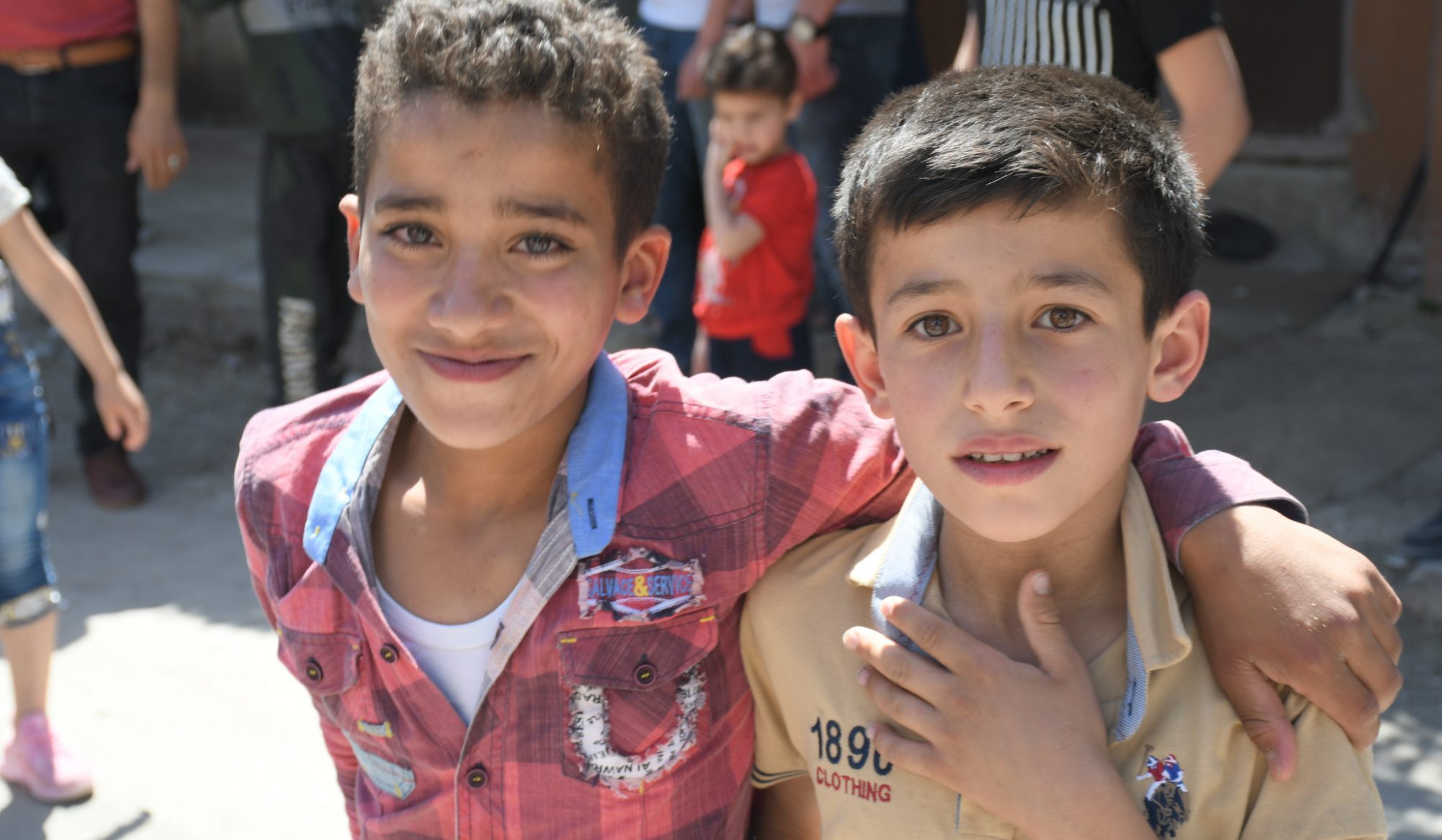 Sanctions On Syria – A Silent Death And Killing Hope

Sanctions are designed to kill Syrians and to kill hope, post war.

Sanctions are very often described, by those enforcing them, as “non-lethal” measures. I would argue that sanctions, when used as a brutal and vindictive component of a neo-colonialist hybrid war strategy, are arguably more devastating than a military war. When they are imposed by global super-force nations against target nations like Syria, in conjunction with a proxy war that has been fomented and sustained by the same nations, it becomes as much a weapon of mass destruction as the terrorist/mercenary armies these US aligned nations have unleashed upon the Syrian people. Thus it is almost impossible to speak about the economic sanctions against Syria in isolation and without referring to the parallel measures that ensure they hit the poorest people in Syria the hardest.

I would argue that the effects of the US/UK/EU Turkish and Arab League sanctions are equivalent to the campaign of infrastructure destruction carried out by the illegal armed groups funded and armed by the US regime change coalition and promoted by their aligned media outlets. Terrorism can be defined by the “unlawful use of force or violence against persons or property in order to coerce or intimidate a government or the civilian population into furtherance of political or ideological objectives”.

The act of withholding means of sustaining life to innocent civilians in order to coerce an entire nation into submission to foreign agendas in the region must surely qualify as economic terrorism. The destruction of essential civilian infrastructure is a war crime, the withholding of essential resources or occupation of those resources is also a war crime. One could argue that the US Coalition is responsible for genocide in Syria under Genocide Convention article II (e) – deliberately inflicting on the group, conditions of life calculated to bring about its physical destruction in whole or in part”.

The correlation between economic and military coercion was made clear by previous Secretary of State, Mike Pompeo’s point-man on Syria, Ambassador James Jeffrey, who not only described Al Qaeda as a “US asset” in Syria but also bragged openly about the misery that sanctions had brought to the Syrian people:

There are a number of sectors of Syrian society that are being targeted by sanctions and simultaneously by US occupation and proxy terrorism which ensure that quality of life for Syrian civilians is severely reduced and their human rights are being gravely violated:

Production had been affected by the sanctions applied in 2011/12. The effect of curtailing of import and export of petrol between 2011 and 2014 is estimated to be a 21 billion dollars loss for Syria. When ISIS occupied the Syrian oil-rich region of north-east Syria they were banking around $ 3million per day in stolen revenue. The Kurdish separatist US contras are now benefiting from the sale of Syrian resources on the back of the US occupation of the north-east oil fields. The US, itself is stealing Syrian oil via Delta Crescent Energy oil company, established under the Trump administration. Other beneficiaries include Al Qaeda who also set up an oil refinery monopoly, going by the name of WATAD, that receives stolen oil and then trades it in Turkey. Effectively, the US or their proxies seized Syrian oil fields early on in the conflict, this has provided revenue for the various contra forces under their control (including ISIS) enabling them to further steal resources, ethnically cleanse areas of Syria and destroy infrastructure while increasing sanctions and imposing a brutal blockade on the Syrian people, the majority of whom live in areas under the protection of the Syrian government.

A huge number of factories have been forced out of existence by incremental sanctions and production has been reduced in those that survived. The cause is lack of fuel, electricity, parts for machinery (the majority came from the EU). A report from the Aleppo Chamber of Commerce in 2015 detailed total closure of 26,000 factories, partial closure of 17,000 and suspended production in 50,000 factories. At the same time, armed groups, including Nusra Front and ISIS invaded the industrial areas of Aleppo and dismantled thousands of factories, destroyed power grids, railways etc and to provide trade revenue in Turkey – many factories were re-established inside Turkey. In October 2015, the US Coalition bombed the Aleppo thermal power station, then under control of ISIS – ensuring total black-out in Aleppo and the surrounding countryside.

The agriculture sector has been affected by the rising costs of fuel, lack of machinery parts thanks to the sanctions. Some of the most abundant olive and cotton growing areas have been occupied by the armed groups who, again, benefit from the illegal trade of Syrian food crops via Turkey and Iraq. Vast swathes of Syrian forestry and wheat crops were deliberately burned in 2020. The US Coalition dropped thermal balloons into wheat crops in the north-east, Kurdish contras took control of wheat storage facilities and restricted supply to Damascus, to the Syrian people. Bread queues became a familiar scene throughout Syria and prices of food went through the roof. Syria is being driven into dangerous food insecurity by a combination of military and economic force, both backed by the same criminal US/UK-led alliance.

While the claim is made that the “humanitarian sector” is exempt from sanctions, this is misleading. Almost 50% of Syrian hospitals have been destroyed during the war against this country, many were occupied by terrorist groups and converted into military centers, Sharia courts, detention and torture centers – for example the Eye and Childrens Hospital in east Aleppo which was finally liberated by the Syrian Arab Army and allies in December 2016. An estimated 20 Pharmaceutical factories were also destroyed or occupied during the terrorist invasions. Syria had a fleet of 703 ambulances in 2011, 350 have been destroyed or stolen by the armed groups or their western-backed auxiliary, the White Helmets. The remaining hospitals and equipment are suffering from lack of updated technology, parts and maintenance because the majority of the hardware was supplied originally by the EU.

This has led to the scarcity of drugs for chronic illnesses like Cancer, heart disease, kidney disease. The health sector, offering free healthcare for everyone inside Syria, has always been a source of pride for the Syrian state – now 41 public hospitals and 621 medical centers are out of commission. There are restrictions on the import of chlorine gas used as a water purifier which has resulted in the spread of infectious diseases  due to the pollution of drinking water. At the same time, NATO-member-state Turkey, is deliberately depriving Syrian people of water in the Hasaka region, north-east Syria. The sanctions are again only one element of a war of hydro hegemony waged by the US Coalition against the Syrian people – a war that impacts upon the health sector with devastating consequences.

The most recent and savage Caesar Act sanctions introduced under Trump are preventing the rebuilding of hospitals and repair of essential machinery. The closure of many of the rural hospitals is leading to inevitable overcrowding of city hospitals resulting in delays in treatment and the spread of disease. Sanctions on the health sector are a deliberate and criminal targeting of the Syrian people by the US Coalition. This violates all human rights conventions and must be condemned.

The electricity sectors in Syria have been devastated by a combination of war and sanctions. There has been a drastic lowering of output which is affected by the lack of fuel thanks to the occupation of oil-resources and inability to source spare parts. Damages in 2015, due to electricity outages, were estimated at 16 billion dollars, now in 2021 that figure will be hugely increased.

Armed groups, dominated by Nusra Front, have systematically destroyed electrical power stations, fuel warehouses, gas and oil pipelines and stolen entire power grids to trade inside Turkey. Entire railway lines have been torn up and melted down inside Turkey or sold as scrap. The Syrian transport system is affected by lack of fuel, spare parts and destruction of essential infrastructure. All of these have a debilitating knock-on effect on Syrian society and how it functions.

Education sectors and tourism sectors in Syria are also being undermined by sanctions and an inability to rebuild and restart after the effects of war.

Overall effects of economic terrorism on the Syrian people

There have been huge price hikes in food across Syria, around 300% increases in some instances. Fuel prices have gone through the roof, inflation is only just under control. This is engendering food insecurity, malnutrition and poverty among 80% of the population. Wages have remained static so an average government employee is earning SYP 50,000 per month ( $ 16 dollars at today’s rate) while, for example, 2kg of chicken is now SYP 20,000. In the winter many areas of Damascus were receiving electricity for only 3 hours per day, in rural areas even less. The cost of heating fuel and gas for cooking is now extortionate – for one gas bottle on the black market, between 30-40,000 while there are long waits for subsidised government supplied gas.

There is a shortage of fuel which has led to queues of up to 2 days to receive 20 litres of fuel. Lebanon is also now out of fuel, having been one of the main suppliers of black market fuel to Syria. Unemployment is rising exponentially. Apartment rental costs have soared, while the building of new projects are on hold due to lack of materials, equipment and investment. Families are being torn apart because young people are risking the dangers of illegal travel routes to the EU and beyond to try to earn money to send back to their impoverished relatives in Syria. The sanctions are suffocating Syria and they are being used to deliberately increase the suffering of the Syrian people who have resisted ten years of war waged against them by the US/UK Coalition that is ensuring their inability to rise out of the quagmire of war.

The US Coalition is effectively following a policy of collective extermination of the Syrian people by military and economic means. This is a crime against Humanity, a war crime and a flagrant violation of the right to life and a life of dignity. Syria is a member of the United Nations, these coercive unilateral measures targeting the people of Syria are a violation of the UN Charter.

Under the most recent and barbaric Caesar sanctions, considered by many experts to be illegal, greater  pressure is being brought to bear against nations who would try to help Syria rebuild. At the same time, the US, UK, EU, Turkey and Israel continue to support and promote terrorism in Syria and enable their proxies to pillage and plunder Syrian resources, further punishing the Syrian people. The sanctions against Syria are a malevolent attempt to bring the country to its knees after one of the most protracted and expensive UK/US led regime change wars has failed militarily. The sanctions are not affecting the alleged targets, they are killing the Syrian people and they are killing hope – we must campaign against them to restore peace and stability to Syria and to the region.