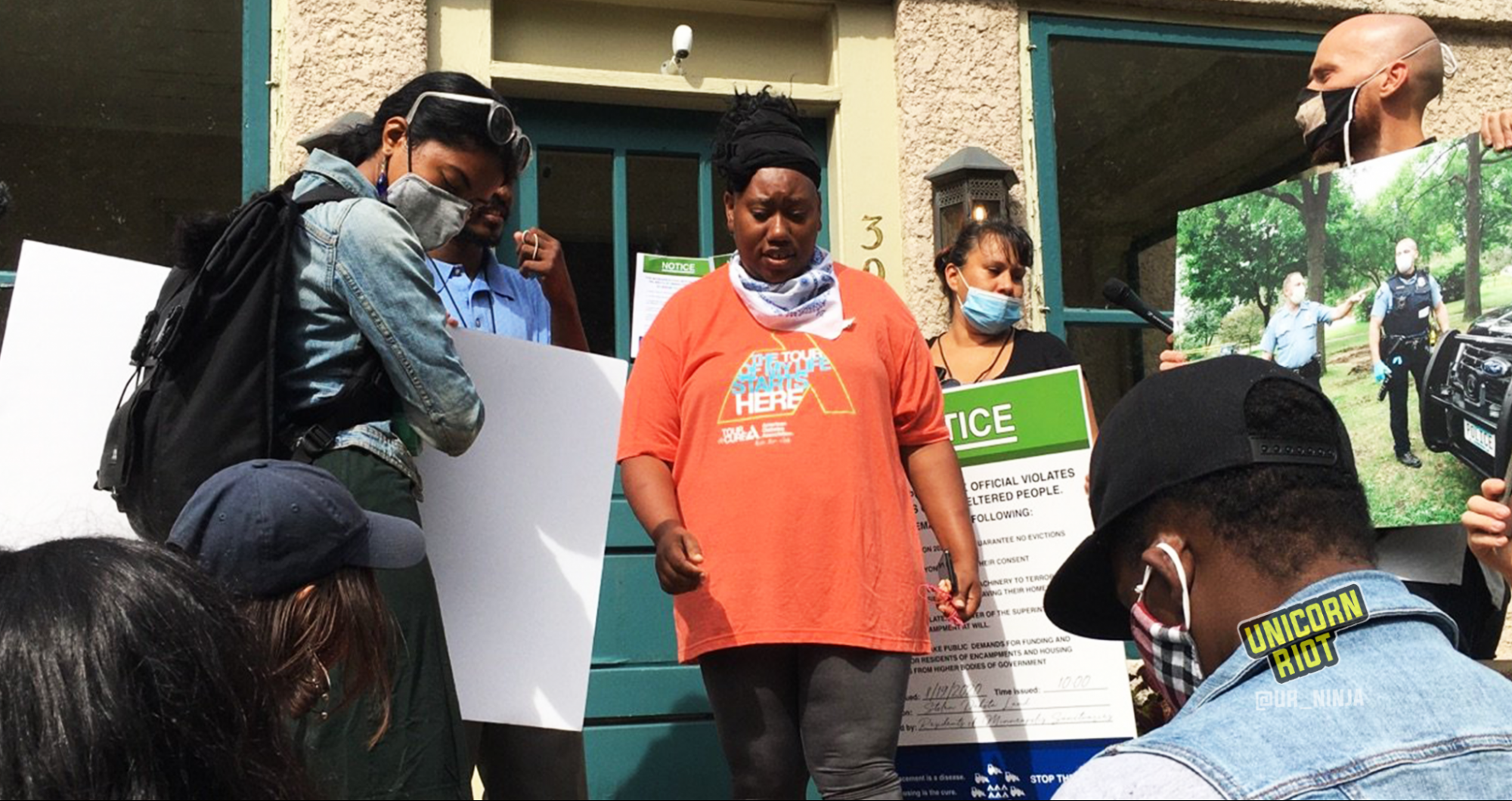 No Housing Solution In Sight.

Minneapolis, MN – Houseless Twin Cities residents have recently endured arrests, the trashing of their belongings, and violent actions at the hands of Park Police, whose participation in these sweeps has been documented by local photographers.

Several hundred people living in dozens of camps across the Twin Cities wonder every day whether their only means of shelter against the elements will be destroyed by police officers.

Last week Friday, the remaining sanctuary encampment at Minneapolis’ Powderhorn Park was cleared by armed police. At least one arrest took place, that of a resident who had been living in a tent next to the lake.

#Minneapolis: We are covering a press conference outside the home of the Superintendant of the Mpls Parks & Recreation Board.

A public account is being given of the recent clearings of unhoused sanctuary encampments in public parks. pic.twitter.com/fD38EyM3QH

“What we need is something beyond the proscribed models they think of as care,” explained Frank Yellow, a Cheyenne River Lakota man.

Two speakers in the medical field condemned the clearings as particularly harmful while the coronavirus pandemic continues to fester and the City of Minneapolis has not yet settled upon a solution for housing members of this vulnerable population.

“If anyone dies, they will become an invisible statistic,” said a Muslim-American cardiac physican who described having visited West Powderhorn Sanctuary before its forced disappearance.

“It’s not the park’s job to provide shelter—but *do no harm.*”

He’d visited the Powderhorn encampment a few weeks ago.

“Displacement is not a solution. It only perpetuates a vicious cycle,” he explained, adding that unhoused ppl deserve elected officials’ “attention & empathy.” pic.twitter.com/t995AmwiuE

Among the unhoused residents, he’d met a man with a heart condition; a woman with an eye infection; a person whose colostomy bag hadn’t been changed in four days; and multiple people with broken limbs.

“All citizens deserve care, not just those who can drive themselves to the hospital,” he said, noting that without an address to follow-up, long-term health care becomes next to impossible.

“Moving people with the same equipment we use to move trash is dehumanizing.“

Recent Minneapolis housing rights protests have openly acknowledged the need to protect the unhoused from exposure to the harsh coming winter. Every year more than one person is found in the Twin Cities having frozen to death outside.

“You know how cold it gets…”#Minneapolis resident reiterates that unhoused ppl don’t have the privilege of being able to wait weeks to solve the housing crisis.

In #Minnesota’s infamously cold temps, hours or minutes can mean the difference between life & freezing to death. pic.twitter.com/CbBtESrvaG

Though Minnesota winters are infamously cold, hypothermia can set in at temperatures as high as 50 °F (10 °C), particularly in damp conditions. More unhoused people die every year in Los Angeles, located in sunny California, than in the country’s most-populous city, New York City.

The city of Minneapolis has permitted for encampments no larger than 25 tents to remain that have been permitted through proper channels. Any person who volunteers to submit the permit is required to pay an application fee, and if the park gets evicted, the eviction gets listed on that person’s individual record.

So far, the city has rejected most of the permits because of the encampment’s proximity to a school. Encampment permits have been issued for four locations: Boom Island, Lake Harriet, Marshall Terrace, and The Mall. Between 15–25 tents are permitted at each site.

After Wednesday’s press conference at the Theodore Wirth Home, unhoused residents attempted an in-person delivery of their five demands to Superintendent Al Bangoura of the Minneapolis Parks & Recreation Board. The demands were listed in the form of an “eviction notice” given on stolen Dakota Land to the superintendent.

video: unhoused #TwinCities residents walking up to the front door of the Theodore Wirth Home & Administrative Building this morning.

They knocked & rang the bell in an attempt to deliver their 5 demands to #Minneapolis Parks & Rec Superintendent Al Bangoura.

Junail Anderson is one of the founders of Freedom From The Streets, “a group of people that’s homeless, formerly homeless, and people on the verge of being homeless.” Since 2019 the group has been facilitating meetings for members of Minneapolis’ unhoused community to make their needs known and get connected with resources they require.

Junail reminded those gathered of the deaths that occurred over the 2019-2020 winter season, and emphasized the need to look at and replicate good temporary shelters that people find tolerable.

We interviewed Junail on July 25 during a housing rights protest march to Mayor Jacob Frey’s residence.

Anderson, who is housed presently, has been attending Elim Church in Northeast Minneapolis ever since she was first homeless. She told Unicorn Riot that she wants houseless people to be able to continue to live nearby their places of refuge.

“If you take out Elim, put Elim somewhere else, I’ll go somewhere else. But right now Elim is my church; it’s my home, and I feel safe there.”

At Logan Park before the march to Mayor Frey’s residence on July 25, one person remarked how Minneapolis has become one of the top 10 most expensive cities in which to rent housing. “They have out-priced our working-class people and I think there should be an end to it.“

During the press conference at the Parks Board Superintendent’s residence on August 19, a member of Minneapolis housing rights advocacy group Parks and Power mentioned housing research done in conjunction with the University of Minnesota.

The data revealed that the Elliott Park neighborhood and Phillips area have experienced the sharpest increases in rent prices across the city. These are also two areas in Minneapolis that have unhoused encampments presently.

“I’m tired of hearing bullshit. I want people in #housing.”

Junail Anderson, co-founder of Freedom From The Streets, reminded those gathered of the frozen bodies found in Mpls over the 2019-2020 winter season.

She noted the need to look at & replicate *good* temporary shelters. pic.twitter.com/HtiVlKWyHa

As of Friday, August 21, homeless sanctuary encampments exist in approximately twenty locations across Minneapolis. Residents at the Loring Park encampment have been moving to the Columbia Park encampment, new as of August 21, with the assistance of local volunteers.