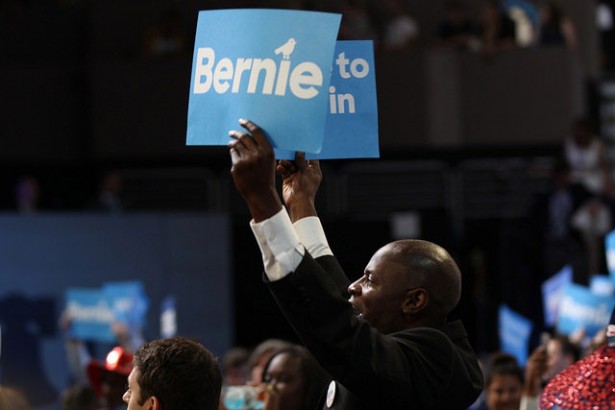 Above Photo: Bernie supporters raise their signs at the Democratic National Convention, July 25, 2016. In a week when Democrats focused on the national election, progressives emphasized the need for local organizing. (Photo: Myles Bess / Youth Radio)

Democrats in Philadelphia have spent this week reckoning with powerful divisions within their party, most visibly from Bernie Sanders delegates attempting to push the party to the left. The big question of the week is: what will the movement inspired by Sanders look like now that Hillary Clinton has secured the nomination?

On Tuesday, a small group of elected officials from around the country gathered at the Ethical Humanist Society of Philadelphia. The meeting was hosted by four leadership organizations, including Local Progress, a coalition of local officials organized around pushing progressive legislation at the local level. The theme of the morning was Local Progress’ organizing principle: Regardless of what goes on at the federal level, municipalities have tremendous power to make meaningful change.

“All politics really is local,” Minnesota Rep. Keith Ellison told the group. “When people think about politics, they generally don’t think about Washington, D.C. They think about downtown.” That’s important for local elected officials, he argued, because they have an opportunity to harness the energy of grassroots community organizers and use it for leverage to create meaningful legislative change.

The Bernie protesters making their presence known this week, Ellison argued, should not be seen as a problem by members of the Democratic Party. “They’re actually helping us,” he argued. “The change that they are demanding and giving energy to, you can give voice to.”

During a week where every ounce of political energy is focused on the presidential election, Local Progress posits that the work done on school boards and city councils can both counter regressive federal policy and also influence it from the left. “We were founded on the belief that, when action and policy move at the local level, it can change the politics,” Sarah Johnson, co-director of Local Progress, told Truthout. “It changes the national environment, what’s acceptable to talk about.”

At the same time, the Sanders campaign and its aftermath show the impact that a national campaign can have on state and local legislatures. Christian Bowe, a member of Democratic Socialists of America (DSA), says that in his home state of New Jersey, the battle for raising the minimum wage for fast food workers has been undeniably influenced by Sanders’ campaign. “That’s legislation that, if Bernie was not running, wouldn’t have gone through either of the state legislatures,” Bowe says. He also credits Fight for 15‘s victory in New York. “Once New York passed it, that put a lot of pressure on Democrats in New Jersey.”

For DSA, says Bowe, the end of the Sanders campaign is a critical moment for organizing. “[Sanders] is definitely not a ‘cult of personality’ thing. We’re backing any kind of labor struggle really strongly.”

Mindy Isser, an organizer born and raised in Philadelphia, also spoke about the importance of labor organizing in the wake of the Democratic primary. “To build off the Sanders campaign, to build off the movement that we’ve been seeing everywhere, we need our unions to be more left-wing and we need rank-and-file members to be politicized,” says Isser. She works on campaigns around public education and housing, and while she thinks that a progressive councilmember like Philadelphia’s Helen Gym is a positive development for the city’s politics, it’s not nearly enough. She speaks of the importance of not only running more left-leaning candidates, but also “moving powerful people more left” after they take office.

Maintaining that pressure from the left after a candidate is elected can be the bigger challenge — the Local Progress meeting was making apparent. The type of mutually beneficial relationship between community groups and elected officials described by Local Progress was at play in the elections of both New York City Mayor Bill de Blasio and Speaker Melissa Mark-Viverito, whose campaigns capitalized on widespread sentiment against Stop and Frisk. The opposition to Stop and Frisk had been cultivated for years by community groups organizing against racist policing. But in the moments before Mark-Viverito addressed the crowd, those same groups took to Twitter to criticize her. Mark-Viverito recently derailed the Right to Know Act— a police reform measure that would require police to identify themselves during stops — by making what The New York Times called a “backroom deal” with the NYPD. Tweets tagging Local Progress and #DemsinPhilly implored Mark-Viverito to pass the bill.

“It’s good to be skeptical of local elected officials,” says Joe Dinkin, the national communications director for the Working Families Party. “That’s the only way we can hold them accountable.”

This week has seen a lot of cynicism and frustration with the electoral process, especially for people to the left of the Democratic party. But, says Dinkin, organizing around elections still matters, “for people who believe that democracy can be about making policies that actually improve people’s lives and address inequities, and that government can be a tool for good… we have to use all the democratic tools at our disposal to push them in the right direction.”

The election of a figure like de Blasio at the local level, and the success of Sanders at a national level, gives visibility to the progressive base in this country.

“Maybe the most important thing the Sanders campaign accomplished was proving that there is actually a huge constituency in America for a much bolder policy agenda than we often get to hear in mainstream politics,” says Dinkin.

Meanwhile, Ellison pointed out, it’s important to remember that — even though election years tend to cast all politics as electoral politics — elections are one of many avenues for change-making.