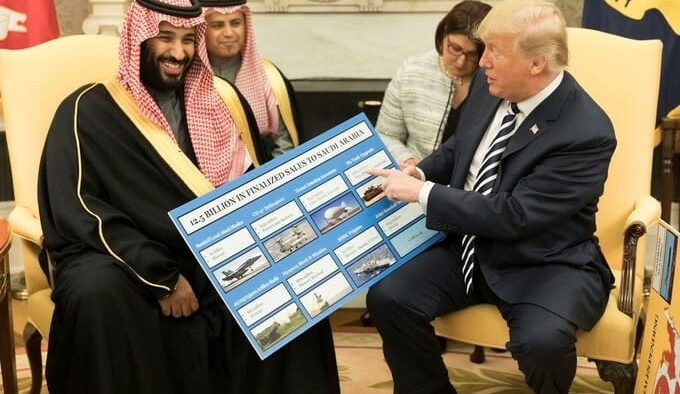 Saudi Arabia Financed The Killers Of American Troops I Commanded

It’s time to ask an uncomfortable question: What exactly is the U.S. getting out of its partnership with Saudi Arabia? The answer is: nothing but headaches, human rights abuses and national embarrassment. In the cynical past, the U.S. could at least argue that it needed Saudi oil, but that’s no longer the case, due to the shale-oil boom (though that fact is not necessarily good for an ever-warming planet).

Recently, the crimes of the Saudi government managed to pierce the Trump-all-the-time-Kanye-West-sometimes media-entertainment complex due to Riyadh’s likely murder of dissident journalist Jamal Khashoggi. That the U.S.-Saudi relationship is, however briefly, coming under the proverbial microscope is a good thing. Still, it is astonishing that this incident—rather than dozens of other crimes—finally garnered attention. Even so, President Trump appears reluctant to cancel his negotiated $110 billion record arms deal with the kingdom.

For me, it’s personal. Saudi Arabia’s fingerprints—both of its government and private-citizen donors—have been all over America’s various opponents these past 17 years of war. I patrolled the streets and suburbs of Baghdad from 2006 to 2007. Sunni Islamist insurgents, which were funded by the Saudis, shot a few of my soldiers and paralyzed one permanently. We regularly found Saudi Wahhabi Islamist literature in the homes and caches of our insurgent enemies.

Years later, from 2011 to 2012, I led a cavalry reconnaissance company in Kandahar, Afghanistan. We chased the Taliban—really a collection of disgruntled farm boys—around the fields and valleys of the Zhari district. Guess where those Taliban fighters—who killed three of my men and wounded 30 others—went to school? In Saudi-financed madrassas across the border in Pakistan.

All told, I—like hundreds of other officers—sacrificed young American soldiers fighting an “enemy” too often armed and funded by the kingdom of Saudi Arabia. In Iraq, my platoon suffered the loss of three lives, the use of a few legs and several gunshot wounds. In Afghanistan, my troop gave up 10 limbs, three lives and endured more than a dozen gunshot wounds. That the Saudis—America’s purported “partners” in the Middle East—have even some of that blood on their hands should be seen as a national tragedy. That it is not reflects poorly on the health and future of this republic.

Saudi Arabia is a fundamentalist theocracy and one of the world’s last absolute monarchies. The kingdom (and its private-citizen donors) have regularly supported Islamist jihadis across the Middle East. Heck, 15 of 19 9/11 hijackers were Saudis. Many of these groups later attacked the U.S. homeland or American troops overseas. Most recently, Riyadh backed the Nusra Front—the al-Qaida affiliate ensconced in the ongoing Syrian civil war.

All too often, Saudi Arabia backs groups that are anti-American, and overall, Riyadh’s regional policy is utterly counterproductive to U.S. interests. Furthermore, the Saudis’ irrational hatred of Iran has kicked off a veritable cold war and arms race in the Persian Gulf—and that’s where those $110 billion in weapons will be funneled. The last thing the overstretched U.S. military needs is to be pulled by our Saudi “partners” into a new war in the region—this time in Iran.

Then there’s the matter of human rights and U.S. “values.” Here, the Saudi record is atrocious. The kingdom beheads dissidents and executes women for adultery, “witchcraft” and “sorcery.” Only in a place like the Arabian Peninsula could it be considered an accomplishment for women to finally gain the right to drive—in 2017. Finally, and most shockingly, in terms of U.S. complicity, since 2015 Riyadh has unleashed terror bombing and a starvation blockade on Yemen—the poorest country in the Arab world. Tens of thousands of civilians have died, tens of millions are in danger of famine and the worst cholera epidemic in recorded history has broken out.

So what is it that keeps Washington so closely—and inextricably—tied to Riyadh? It’s increasing clear that the profits of the military-industrial complex might provide the best explanation. The United States no longer produces much of value. Deindustrialization crippled our Rust Belt, reoriented America to a service economy and increased the growing gap between rich and poor. These days, guns and bombs—the U.S. is by far the largest international arms dealer—are the one thing Uncle Sam still produces.

Seen this way, we must look again to the $110 billion deal Trump negotiated with Saudi Arabia. It may just be Lockheed Martin, Boeing, Honeywell and other such corporations that keep Washington indefinitely in bed with the Saudi king and princes. What’s more, guess who serves on the boards of many of those companies, in a controversial revolving door? Retired generals and admirals. The embarrassing, counterproductive U.S.-Saudi relationship thus appears to reflect a structural flaw embedded in the U.S. economy: its co-option by the ever-stronger military-industrial complex.

Maybe the recent uproar over the Saudis’ alleged murder of Khashoggi will achieve what tens of thousands of dead Yemenis and the loss of thousands more U.S. troops could not—a reboot of U.S. policy toward the kingdom.

As a historian, I wouldn’t count on it.