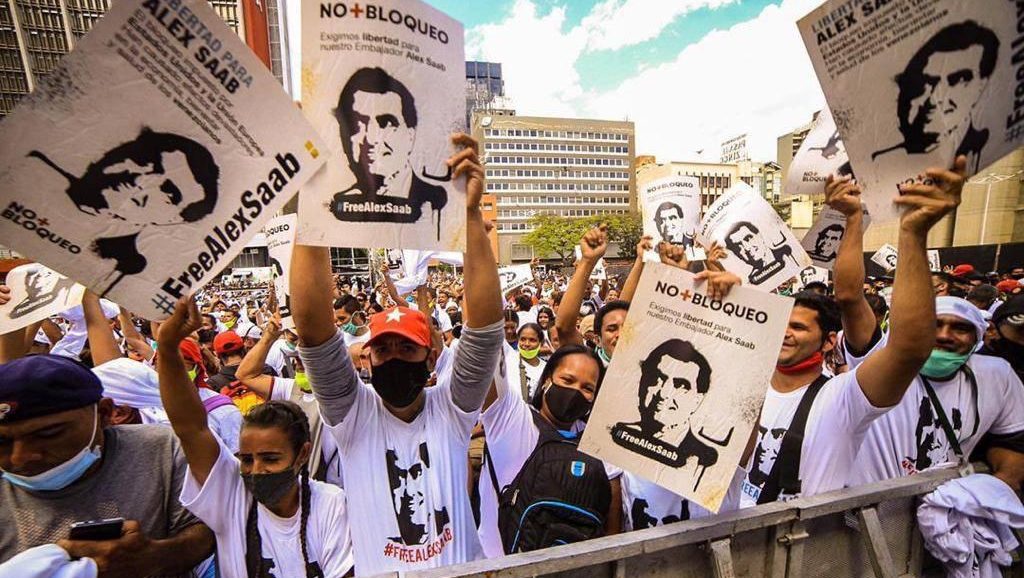 U.S. authorities ordered his arrest, and Alex Saab was pulled off a plane on June 12, 2020, during a refuelling stop in the Republic of Cabo Verde, an island nation off Africa’s West Coast.

Saab, a Venezuelan diplomat to the African Union, was on a humanitarian mission to Iran at the time of his seizure to arrange emergency shipments of food, medicine, and essential supplies for Venezuela.  Detained and imprisoned in total isolation and darkness in Cabo Verde for the past year, Saab has also been tortured.

Saab is battling cancer and urgently needs to be cared for by his doctors in Venezuela.

The U.S. sanctioned Saab for his diplomatic role purchasing essential supplies for Venezuela and indicted him for building houses for the less well-off, calling his work “money laundering.” In March, however, after a three-year investigation, Swiss prosecutors found no evidence to support charges of money laundering.

Saab has never worked in nor lived in nor visited the United States for the past 30 years, nor was he involved in any transaction that included the U.S. Every aspect of Saab’s seizure and abusive treatment violates international law.

If the U.S. government can extradite Alex Saab, Washington could be emboldened to seize, charge and extradite anybody anywhere. This kidnapping is a chilling reminder of the notorious U.S. program launched in 2001 of secret renditions and disappearances of hundreds of people worldwide, some held for years without trial.

A credentialed diplomat, Saab’s arrest and year-long detention flagrantly violates internationally guaranteed diplomatic immunity. This act, ordered by the Trump Administration, is a racist insult to the African Union. It should not be continued by the Biden Administration.

The request for extradition is entirely illegal as the U.S. has no extradition treaty with Cabo Verde, whose population of 561,000 is spread over 10 volcanic islands.

Cabo Verde is a member of the Economic Community of West African States (ECOWAS). The ECOWAS Court of Justice ordered Saab’s immediate release and termination of the extradition process on 15 March. Pressured by the U.S., Cabo Verde has yet to comply with the ECOWAS Court’s decision and is preparing an extradition trial.

U.S. sanctions on Venezuela, Iran and 37 other countries violate international law and the U.N. Charter. Aimed at destabilizing a country through economic sabotage, sanctions inflict impoverishment and suffering on the civilian population and create dire shortages in essential supplies.

The U.S. has sabotaged Venezuela’s exports and imports for years and has especially targeted a direct, house-to-house, food delivery program, called the CLAP Program, depriving Venezuelans of food.

Alex Saab’s case has received international publicity, especially in African and Venezuelan news media, but in the U.S. corporate media, there has been almost no coverage.

Saab’s case impacts the 15 African countries already under U.S. sanctions. It resonates in U.S.-sanctioned Iran and in Venezuela, where social media campaigns and demonstrations have demanded Saab’s release.

We join in calling for the immediate release of Venezuelan diplomat Alex Saab.

Alex Saab is held in complete isolation in Cabo Verde and is in a life-threatening crisis. He is battling cancer. This has been untreated for the year he has been held.

Medical care has been refused! A visit from a London oncologist was refused. Alex Saab must be immediately released on humanitarian grounds.

Alex Saab was kidnapped, held and tortured under orders from the Trump administration.

We call on President Biden to drop the demand for Alex Saab’s extradition to the U.S. This is clearly a violation of international law.

We call on the Prime Minister and the President of Cabo Verde to release Saab immediately to Venezuela to receive medical treatment.

* organization listed for identiification purposes only