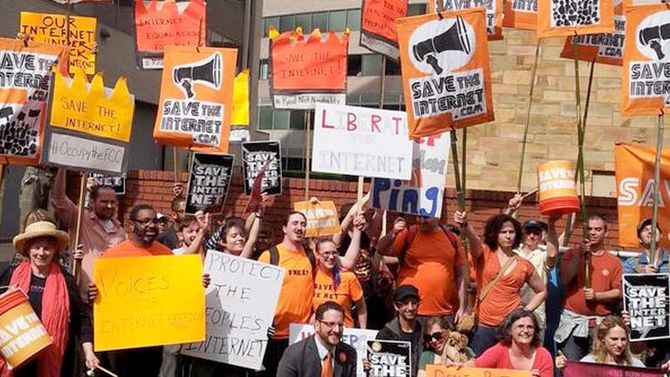 Save Net Neutrality: Shut The FCC Down

It’s time to rise up and protect net neutrality once again.

If you’ve been with Popular Resistance for a few years, you’ll remember the action campaign that we organized with allies to pressure the Federal Communications Commission (FCC) to reclassify the Internet as a common carrier, like a utility, to protect net neutrality. Net neutrality guarantees that Internet providers cannot discriminate. They can’t speed up some content and slow down others. They can’t block us from going where we want to go on the Internet.

OUR NEXT ACTIONS ARE THE WEEK OF DECEMBER 11 AT THE FCC. THE VOTE WILL TAKE PLACE ON DECEMBER 14.

The FCC will vote on taking net neutrality away on December 14. This is the time of year when folks in Washington, DC do their dirty work because they think everyone is  busy consuming for the holidays.

We can’t let them get away with this! We need to have a strong presence at the FCC on the day they vote to deter them from ending net neutrality. Maybe we can even shut the FCC down (if enough people are willing to defend the Internet).

We are asking you to sign up on the form below if you are willing to come to DC to join us in an action at the FCC. We will find out three weeks before the hearing, so this will give us time to alert you and to rent space for sleeping and planning actions. There will be many roles for people to fill and whether you can risk arrest or not, you are needed!

Please sign up if you think you can be there and spread the word! Use the social media sharing buttons at the top left of this post.