East of the suburban sprawl of Phoenix just past Superior, Arizona, in the mountains of the Tonto National Forest lies Oak Flat, sacred to the San Carlos Apache people. Resolution Copper, owned by two foreign companies, has been maneuvering for years to acquire and destroy this oasis. Traditionally the Apache have come here for edible and medicinal plants. Various native bird species live here, and there’s lots of water. According to Roy Chavez who once served as mayor of Superior, an ocelot road-carcass was found nearby, indicating that Oak Flat is evidently within the range of this rare and elusive cat. The huge rocks and ancient oaks are treasures that must be protected for their environmental and their sacred value. They are part of the culture that has flourished here for thousands of years. It would be infinitely horrible to destroy this site.

The ridge above, popular with rock climbers, is where in the early 1870s the U.S. Cavalry massacred a group of 75 Apache men, women and children. (The conventional narrative is that warriors jumped from Apache leap instead of surrendering.) The San Carlos reservation a little further east was established for prisoners during the relentless settler expansion, and to certain anti-assimilationist Apaches, the reservation continues to function into the twenty-first century as a prisoner-of-war camp. 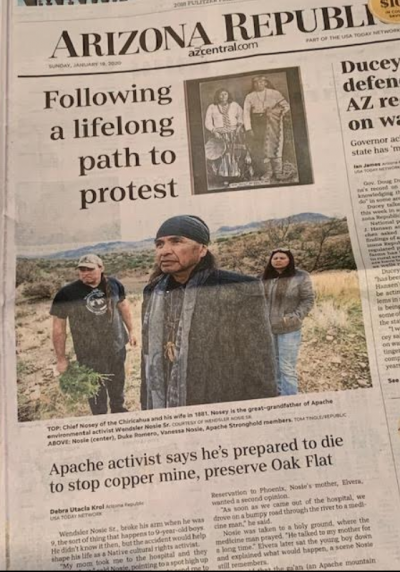 Oak Flat must be recognized as a biocultural, sacred and protected archaeological site, and must properly belong to the indigenous people. For many centuries indigenous Apache peoples have performed religious ceremonies on this ground. John Washington, the writer of an even-handed pro & con article in the “edible Baja Arizona” magazine, reported special features of the site. Sunrise coming-of-age rituals for Apache girls are still performed here after a 150-year hiatus.

This land was nominally preserved in perpetuity, protected from hard rock exploitation by President Eisenhower. However, in 2014 Senators John McCain and Jeff Flake scandalously slipped a land-exchange rider onto a “must-pass” defense appropriation bill.  In the dishonorable last-minute arrangement for the corporations, even the requirement for an environmental impact assessment was not required   The legislative action had been opposed by many including the tribe.

The swap benefits the multinational Resolution Copper/Rio Tinto mining conglomerate at the expense of everybody else. The deep block-cave method they are planning for directly underneath Oak Flat would extract a huge volume of rock, resulting in a concomitantly huge one-mile-wide subsidence crater. Oak Flat would be obliterated.

The first step in the destruction of Oak Flat is “de-watering.” This, of course, will impact the groundwater and surface waters of the whole area, including the surrounding towns of Superior, Globe, and Miami. At the extreme high-temperature 7,000-foot depth of the mine, the extraction is designed to be robotic. Vast volumes of material would be crushed underground, conveyed to property in the town of Superior, and milled. Spent tailings would be transported in a slurry pipeline to be deposited as a gargantuan forever-barren heap spoiling other nearby public or tribal lands. Phoenix and the Gila River and many suburban areas will be severely impacted.

Arizona is rife with mining sites, contaminated sacrifice zones turned upside-down. Roy Chavez and other retired miners have formed a group with the ostensible aim of saving Oak Flat and somehow advocating for better mining practices too. This message is in utter dissonance with the Apache-Stronghold position of “NO MINE.”

Successful resistance at Oak Flat can disrupt the ethos of cancerous growth. Instead of allowing Resolution/Rio Tinto to commodify this sacred site for export, Wendsler Nosie, Sr., and all the nonviolent hero-warriors who comprise Apache-Stronghold will serve the greater good by making Oak Flat a monumental corporate stranded asset.

The omnicide at Oak Flat is not a done deal. Wendsler Nosie, Sr., charismatic former chairman of San Carlos, has been for years spearheading the uncompromising resistance. He and his family have enlisted activists against Resolution/Rio Tinto rapacity since long before the land swap was legislated. A dozen tribal and religious leaders back Wendsler’s drive to save Oak Flat. Reverend William Barber of the U.S. Poor People’s Campaign for Moral Revival is one of the outspoken supporters of the Apache-Stronghold Coalition. Internationally too the protection of this sacred site is garnering attention.

In late November of 2019, Wendsler announced his new permanent residency at Oak Flat. He is acting from a strong sense of personal destiny. Along the route of an annual reverential run/walk from Old San Carlos, he made the ceremonial 3-day march to this ancestral home. In mid-December the San Carlos Apache invited the public to a welcome-home weekend of food, info sessions, and camaraderie around an open fire. Saving Oak Flat is responsible for the stewardship of the land and water. This is a clear case of protecting a cultural treasure from the eco-crime of avaricious destructive powerful mining interests. Harassment and desecration at the site have been occurring.

In the U.S. Congress, Representative Raul Grijalva and Senator Bernie Sanders introduced the 2015 “Save Oak Flat Act” as HR 665 and S 173, to repeal the nefarious land swap. Parenthetically, the anachronistic 1872 Mining Law is way overdue for an overhaul. For Oak Flat, hope hangs on NEPA, the National Environmental Protection Act, on Congress, and on the courts. The U.S. Congress surely must enhance environmental and cultural legal protections against secret sweetheart deals. Outdoor recreation in the area accounts for more than double the annual revenue from mining, according to former mayor Roy Chavez, who has done a considerable analysis of the regional economy. In consideration of the pocketbook, alongside ethical grounds, lawmakers can be encouraged to support the “Save Oak Flat Act.”

All peaceful folk are welcome to visit Oak Flat to get a sense of the natural heritage that would be lost and to raise the alarm. (No drug-slinging, smoking or alcohol consumption, please.) Supporting and protecting Oak Flat is more than a casual camping trip. Aligning with Apache-Stronghold and manifesting at Oak Flat is taking a stand against extermination, assimilation and colonial disregard for indigenous cultural traditions.

It is getting late but there is still time to stop the madness at Oak Flat. Only the crazy corporations know what damage is being done right now deep down with their drills and injections of chemicals. They have been extracting poisoned thermal water for several years, pouring some of it into the streams. They are already trucking great volumes of unknown material somewhere to pollute as usual. They have drained the beautiful Oak Flat Lake. Recent unusual heavy rains have almost broken the many-years-drought and slowed the de-watering work of the company. The lake is partially refilled, but what is the damage to the lake life? Nature is resisting, but the new roads and increasing commerce and vandalism are likely to continue.

Historic and important scientific areas of Earth are being destroyed every year. The wanton destruction of Oak Flat would be part of a series of permanent losses of cultural and archeologic sites that could otherwise revise understanding of human arbor agriculture. The role of acorn food in human history is just now being discovered. History, food, and nutrition are basic science.

This is the time for all people to come to the aid of Oak Flat and of ourselves. We are Oak Flat. The Apache Tribe people have done much with organization to stop the onslaught of the corporations and the venal politicians. We must join them with our force. Most politicians to date are either neutral or opposed to stopping the mine. Remember, this issue is basic to the worldwide neoliberal poor management of the economy, global warming, pollution, resource waste, ineffective democracy, abuse of indigenous rights, and abuse of the Earth. Please make the horror not happen. The thousand-year-old white oaks and beautiful mountain rocks of sacred cultural importance must not implode into rubble.