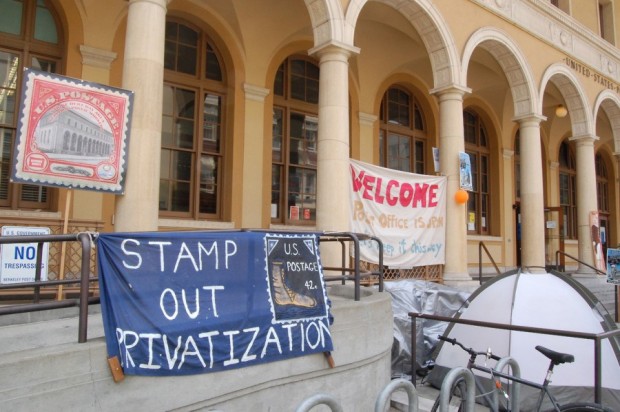 Above photo: By Nathaniel Solley of DailyCal.org

Perhaps you’ve noticed there are fewer post offices around. In the past decade, the United States Postal Service has closed almost 200 facilities nationwide in an aggressive effort to do away with and eventually privatize an institution that is older than the country itself. Included in that number are post offices that used to be on Main Street near St. Vincent’s Hospital and on Stratford Avenue. Like so many, they were closed and not replaced. Those closings have left Bridgeport, a city of 150,000 people, with exactly four post offices.

For the rest of 2015, 82 more facilities nationwide are on the chocking block and, barring community outrage, won’t be replaced. The rationale used by those leading the attack is that the USPS is losing money. In fact, it’s a huge money maker, with operating profits in 2014 of $1.4 billion. What has caused its financial problems is the 2006 Postal Accountability and Enhancement Act (PAEA), an unprecedented law pushed through by politicians who serve the 1% requiring pre-funding of health benefits for USPS retirees for 75 years.

The yearly tab for that monstrosity is $5.5 billion and the intent was precisely what is happening: the gutting of one of the country’s most valued resources. No other agency is required to do anything remotely like pre-fund health benefits for 75 years. That the PAEA was rammed through by politicians who serve business elites should surprise no one. Their agenda, be they Republican or Democrat, is to destroy projects that serve the common good, especially hugely successful ones like the postal service. Further exposing their agenda is the profligate pre-funding requirement.

By Andy Piascik. United States – Throughout the country, postal workers and community allies have prevented the closing of many facilities. Among the actions taken were a post office occupation in Oregon and the erection of a tent city in front of a facility in California. Several years ago, similar popular pressure stopped the attempted elimination of Saturday delivery service.

The large scale elimination of facilities has had the predictable result of increasing costs because of the greater distance mail must travel. Consider that an item mailed from a Bridgeport address to another Bridgeport address, for example, now goes to a distribution facility in Kearny, New Jersey before arriving at its final destination, then consider that the same rocket scientists who came up with that one hail themselves as fiscally responsible and attack the USPs as inefficient. Fewer facilities also results in skyrocketing overtime for letter carriers unable to complete their routes in eight hours and longer commutes for workers who can be transferred as much as 50 miles with no appeal or recourse.

Over one hundred thousand good paying USPS jobs have been killed as a result of the privatization efforts, and virtually all new hires are temps whose benefits and wages  are far lower than regular workers. The privatizers have also shifted much postal work to Staples, a company notorious for its hostility to employees.

Staples, for example, cut the hours of thousands of workers below 25 hours per week to make them ineligible for company health insurance, and Staples employees also earn far less than established postal workers. In response, there have been many actions around the country demanding that the Staples contract be rescinded. Instead, the USPS intends to also begin shifting work to Walmart, an employer with a record even worse than Staples.

One more ugly part of the story is the incestuous relationship between the USPS, privatizers and the corporate politicians. The contract to close post offices was awarded to the CBRE real estate firm whose CEO Robert Sulentic is on the Staples board of directors. Richard Blum, CBRE board chair until late last year, is married to California Senator Dianne Feinstein. CBRE will make hundreds of millions from the deal.

Those who delude themselves that the heavily subsidized “private” sector can do a better job than the USPS should be careful what they wish for. UPS, FedEx and other private carriers are more expensive than the USPS and less efficient. And unlike the USPS, there are many parts of the country that private carriers do not service.

A publicly-funded, national postal service is one of our country’s great achievements. It should be improved, not destroyed, and a collective demand for the repeal of the PAEA would be a big step in the right direction. The public should also join postal workers to demand an end to the contracts with Staples and Walmart and an end to postal facility closures.

Bridgeport native Andy Piascik is an award-winning author who writes for Z Magazine, CounterPunch and many other publications and websites. He can be reached at andypiascik@yahoo.com.

Update from A Grand Alliance To Save Our Public Postal Service

The Alliance continues to advocate for great, public postal services and call on the Postmaster General to strengthen the US Postal Service. In our last update, we brought you the latest news on the Postal Service’s decision to lower service standards and close mail processing facilities. We asked you to keep up the pressure on postal executives and demand they stop the planned closures and consolidations and restore service standards.

Just this week, responding to pressure from many different sources, postal management confirmed that they are suspending the remaining facility closures that were scheduled for 2015. While this is good news—for the time being—we must stay vigilant, and continue to push for the great postal services the people of this country deserve.

A new white paper by the USPS Office of Inspector General (OIG) shows that the Postal Service can act now to expand and enhance existing services—such as  money orders, international money transfers, check cashing and bill pay—without new federal legislation. Expanding these services would strengthen the Postal Service by generating $1.1 billion in annual revenue while providing affordable, essential services to 68 million people in the U.S. who either don’t have a bank account or make use of predatory payday lenders and check-cashers.

A new coalition, The Campaign for Postal Banking, is calling on the Postal Service to expand its financial services. To learn more about postal banking, visit campaignforpostalbanking.org.

Members of the Alliance participate in Postal Workers’ Day of Action

On May 14, the American Postal Workers Union held a national day of action to “Stand with Postal Workers” as they fight for good service, good jobs, and a good contract. In contract negotiations, APWU has been brought service issues such as mail delivery standards, postal banking, and extended post office hours to the bargaining table. Several Alliance signatories stood with postal workers on this day.

At a press conference at a downtown Washington, DC post office, Danny Glover was joined by Mark Dimondstein of the American Postal Workers Union (APWU), Larry Cohen of the Communications Workers of America (CWA), and Melanie Campbell of the National Coalition on Black Civic Participation and the Black Women’s Roundtable, Clayola Brown, president of the A. Philip Randolph Institute; Rev. Steven D. Martin of the National Council of Churches, and Richard Fiesta, executive director of the Alliance for Retired Americans to show support for the postal workers and their struggle. Watch videos of these Alliance members at APWU’s site here. The American Federation of School Administrators issued a statement on standing with postal workers, which we featured here, and Campaign for America’s Future also joined postal workers in their call for quality postal services.