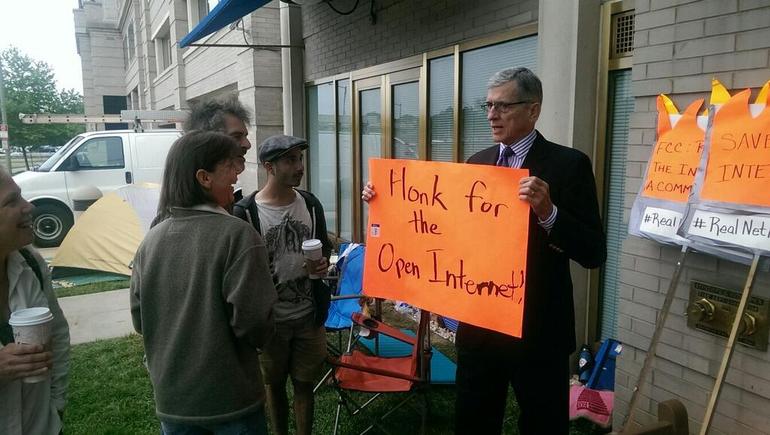 Saving The Internet: What Is Coming Next?

Above: Tom Wheeler holding a sign supporting an “Open Internet” but does he support real net neutrality? An open Internet without discrimination based on wealth? So far, the answer is “no” but he has opened the possibility of changing his mind.

Today we begin the next campaign: “Which Side are you on, Tom?” Join us at the FCC every Monday in June from 4:30 to 6 pm to flier and picket in a build up to a major action on July 1 for real net neutrality.

Internet Non-Discrimination Campaign Continues: Which Side Are You On, Tom?

The first phase of our campaign to save the Internet succeeded in pushing open the door to treating the Internet as a common carrier where there is no discrimination. Popular Resistance with the help of other organizations created an encampment outside of the FCC where dozens of other groups continued their excellent work of generating phone calls and emails to the commission demanding real net neutrality – an Internet not based on a person’s ability to pay for better service, but an Internet where everyone has equal access. The Chair of the FCC, Tom Wheeler, continues to support a tiered Internet based on ability to pay, but because of the pressure from the people, the fundamental issue of reclassifying the Internet as a common carrier was added to the agenda Nearly 50,000 comments have already been sent on the “Open Internet” rule, almost all supporting our position. As outlined here, people are submitting comments to the public record and are raising their voices louder than Comcast’s lobbyists to save the people’s internet. To see more actions you can take visit Save The Internet.

Working within the public comment system is not enough.  We’re planning more actions and are focusing our attention on Tom Wheeler so the chair of the FCC knows he has to pick a side — is he with the people or with the telecom companies? Does his vision of an open Internet include discrimination based on wealth or equal access to all?

Phase I: Which Side Are You On, Tom?

Join us today, if you are in Washington, DC.  On Monday, June 2nd from 4:30 to 6:00 PM, we will be starting our “Which Side Are You On, Tom? Campaign” at the FCC.  The first phase involves fliering the FCC.  The fliers we will be passing out focus on encouraging FCC employees to blow the whistle if they see any undue influence by Comcast or other telecoms during this critical debate on the future of the Internet.  At the bottom of the flier we will also alert people to the upcoming “show” at the FCC in early July entitled “Which Side Are You On, Tom?”

We plan to be handing out fliers while FCC employees are leaving work from 4:30PM until 6PM.

We will be fliering on every Monday in June.  We are plan a workshop in Washington, DC on the last weekend in June where we will develop artwork for an event on Tuesday, July 1st. On Monday, we will have a final day of fliering where we will invite FCC employees to the “Which Side Are You On, Tom?” show at noon on July 1.

The FCC Employees Will Be Told to ask: Which Side Are You On, Tom; and to Blow the Whistle with this Flier:

You can help protect Freedom of Speech for the 21st Century

The FCC is about to make a critical decision about the future of the Internet. Will it be a tool for all Americans with equal access to all – a common carrier without discrimination – or will it become a tiered system of different service depending how much you pay?

The public is clear: super-majorities of Americans want the Internet to be a common carrier, equal to all. Many Internet companies – from tiny start-ups to Google agree. But a few giant telecoms want a tiered system so they can make even bigger mega-profits from a technology created by taxpayer dollars.

The FCC commissioners are divided. Comcast and other telecoms are trying to influence the outcome.

What can YOU do to ensure an equal access Internet for our children, grandchildren and all Americans?

If you see undue influence by telecom companies, let the country know. Blow the whistle. If your integrity has been compromised by industry corruption, now is the time to speak out. You can blow the whistle safely, without risk to your career. Below are resources to help:

Coming soon: Which Side Are You On, Tom?: A show about FCC Chair Tom Wheeler in front of the FCC on July 1. Details coming!