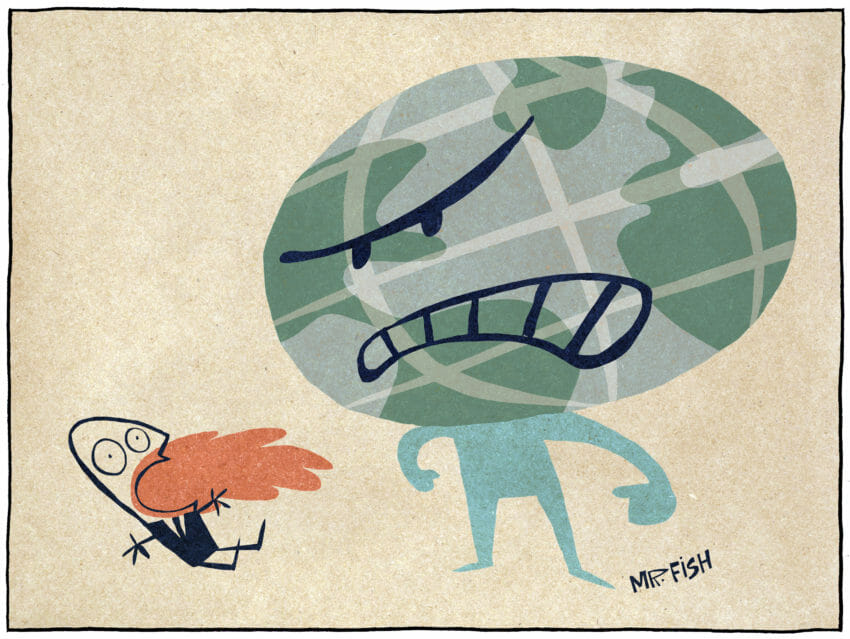 The spectacular rise of human civilization—its agrarian societies, cities, states, empires and industrial and technological advances ranging from irrigation and the use of metals to nuclear fusion—took place during the last 10,000 years, after the last ice age. Much of North America was buried, before the ice retreated, under sheets eight times the height of the Empire State Building. This tiny span of time on a planet that is 4.5 billion years old is known as the Holocene Age. It now appears to be coming to an end with the refusal of our species to significantly curb the carbon emissions and pollutants that might cause human extinction. The human-induced change to the ecosystem, at least for many thousands of years, will probably make the biosphere inhospitable to most forms of life.

The planet is transitioning under our onslaught to a new era called the Anthropocene. This era is the product of violent conquest, warfare, slavery, genocide and the Industrial Revolution, which began about 200 years ago, and saw humans start to burn a hundred million years of sunlight stored in the form of coal and petroleum. The numbers of humans climbed to over 7 billion. Air, water, ice and rock, which are interdependent, changed. Temperatures climbed. The Anthropocene, for humans and most other species, will most likely conclude with extinction or a massive die-off, as well as climate conditions that will preclude most known life forms. We engineered our march toward collective suicide although global warming was first identified in 1896 by the Swedish scientist Svante Arrhenius.

The failure to act to ameliorate global warming exposes the myth of human progress and the illusion that we are rational creatures. We ignore the wisdom of the past and the stark scientific facts before us. We are entranced by electronic hallucinations and burlesque acts, including those emanating from the centers of power, and this ensures our doom. Speak this unpleasant truth and you are condemned by much of society. The mania for hope and magical thinking is as seductive in the Industrial Age as it was in pre-modern societies.

Ate and Nemesis were minor deities who were evoked in ancient Greek drama. Those infected with hubris, the Greeks warned, lost touch with the sacred, believed they could defy fate, or fortuna, and abandoned humility and virtue. They thought of themselves as gods. Their hubris blinded them to human limits and led them to carry out acts of suicidal folly, embodied in the god Ate. This provoked the wrath of the gods. Divine retribution, in the form of Nemesis, led to tragedy and death and then restored balance and order, once those poisoned with hubris were eradicated. “Too late, too late you see the path of wisdom,” the Chorus in the play “Antigone” tells Creon, ruler of Thebes, whose family has died because of his hubris.

“We’re probably not the first time there’s been a civilization in the universe,” Adam Frank, a professor of astrophysics at the University of Rochester and the author of “Light of the Stars: Alien Worlds and the Fate of the Earth,” told me when we met in New York.

“The idea that we’re destroying the planet gives us way too much credit,” he went on. “Certainly, we’re pushing the earth into a new era. If we look at the history of the biosphere, the history of life on earth, in the long run, the earth is just going to pick that up and do what is interesting for it. It will run new evolutionary experiments. We, on the other hand, may not be a part of that experiment.”

Civilizations probably have risen elsewhere in the universe, developed complex societies and then died because of their own technological advances. Every star in the night sky is believed to be circled by planets, some 10 billion trillion of which astronomers such as Frank Drake estimate are hospitable to life.

“If you develop an industrial civilization like ours, the route is going to be the same,” Adam Frank said. “You’re going to have a hard time not triggering climate change.”

“For a civilization to destroy itself through nuclear war, it has to have certain emotional characteristics,” Frank said. “You can imagine certain civilizations saying, ‘I’m not building those [nuclear weapons]. Those are crazy.’ But climate change, you can’t get away from. If you build a civilization, you’re using huge amounts of energy. The energy feeds back on the planet, and you’re going to push yourself into a kind of Anthropocene. It’s probably universal.”

Frank said that our inability to project ourselves into a future beyond our own life spans makes it hard for us to grasp the reality and consequences of severe climate change. Scenarios for dramatic climate change often center around the year 2100, when most adults living now will be dead. Although this projection may turn out to be overly optimistic given the accelerating rate of climate change, it allows societies to ignore—because it is outside the life span of most living adults—the slow-motion tsunami that is occurring.

“We think we’re not a part of the biosphere—that we’re above it—that we’re special,” Frank said. “We’re not special.”

“We’re the experiment that the biosphere is running now,” he said. “A hundred million years ago, it was grassland. Grasslands were a new evolutionary innovation. They changed the planet, changed how the planet worked. Then the planet went on and did things with it. Industrial civilization is the latest experiment. We will keep being a part of that experiment or, with the way that we’re pushing the biosphere, it will just move on without us.”

“We have been sending probes to every other planet in the solar system for the last 60 years,” he said. “We have rovers running around on Mars. We’ve learned generically how planets work. From Venus, we’ve learned about the runaway greenhouse effect. On Venus the temperature is 800 degrees. You can melt lead [there]. Mars is a totally dry, barren world now. But it used to have an ocean. It used to be a blue world. We have models that can predict the climate. I can predict the weather on Mars tomorrow via these climate models. People who think the only way we can understand climate is by studying the earth now, that’s completely untrue. These other worlds—Mars, Venus, Titan. Titan is a moon of Saturn that has an amazingly rich atmosphere. They all teach us how to think like a planet. They have taught us generically how planets behave.”

Frank points out that much of the configurations of the ecosystem on which we depend have not always been part of the planet’s biosphere. This includes the Gulf Stream, which carries warm water and warm air up from Florida to Boston and out across the Atlantic.

“Hundreds of millions of people in some of Earth’s most technologically advanced cities rely on the mild climate delivered by the Gulf Stream,” Frank writes in “Light of the Stars.” “But the Gulf Stream is nothing more than a particular circulation pattern formed during a particular climate state the Earth settled into after the last ice age ended. It is not a permanent fixture of the planet.”

“Everything we think about the earth just happens to be this one moment we found it in,” he told me. “We’re pushing it [the planet] and we’re pushing it hard. We don’t have much time to make these transitions. What people have to understand is that climate change is our cosmic adolescence. We should have expected this. The question is not ‘did we change the climate?’ It’s ‘of course we changed the climate. What else did you expect to have happened?’ We’re like a teenager who has been given this power over ourselves. Just like how you give a teenager the keys to the car, there’s this moment where you’re like, ‘Oh my God I hope you make it.’ And that’s what we are.”

“Climate change is not a problem we have to make go away, in a sense that you don’t make adolescence go away,” Frank said. “It is a dangerous transition that you have to navigate. … The question is are we smart enough to deal with the effects of our own power? Climate change is not a pollution problem. It’s not like any environmental problem we’ve faced before. In some sense, it’s not an environmental problem but a planetary transition. We’ve already pushed the earth into it. We’re going to have to evolve a new way of being a civilization, fundamentally.”

“We will either evolve those group behaviors quickly or the earth will take what we’ve given it, in terms of new climate states, and move on and create new species,” he said.

Frank said the mathematical models for the future of the planet have three trajectories. One is a massive die-off of perhaps 70 percent of the human population and then an uneasy stabilization. The second is complete collapse and extinction. The third is a dramatic reconfiguration of human society to protect the biosphere and make it more diverse and productive not for human beings but for the health of the planet. This would include halting our consumption of fossil fuels, converting to a plant-based diet and dismantling the animal agriculture industry as well as greening deserts and restoring rainforests.

There is, Frank warned, a tipping point when the biosphere becomes so degraded no human activity will halt runaway climate change. He cites Venus again.

“The water on Venus got lost slowly,” he said. “The CO2 built up. There was no way to take it out of the atmosphere. It gets hotter. The fact that it gets hotter makes it even hotter. Which makes it even hotter. That’s what would happen in the collapse model. Planets have minds of their own. They are super-complex systems. Once you get the ball rolling down the hill. … This is the greatest fear. This is why we don’t want to go past 2 degrees [Celsius] of climate change. We’re scared that once you get past 2 degrees, the planet’s own internal mechanisms kick in. The population comes down like a stone. A complete collapse. You lose the civilization entirely.”