Ranson, W.Va.–The Jefferson County Board of Education will no longer pursue condemnation of Rockwool’s property to build a educational center to provide services for student with special needs. The school board abandoned its bid to obtain the Rockwool site via eminent domain in a settlement agreement announced today by the two parties. Rockwool in turn dropped its lawsuit against the Board of Education which sought to block the condemnation.

The Board of Education proposed to build a Regional Student Support Center on the Rockwool site across from North Jefferson Elementary to provide services for special needs students. Rockwool will contribute $250,000 toward the purchase of property for the RSSC as part of the settlement.

Rockwool is constructing a mineral wool manufacturing facility across the street from North Jefferson Elementary and within two miles of public schools which serve 30% of the county’s schoolchildren. The energy intensive process to heat rock and slag to 2,700 degrees in a furnace, then spin the lava into fibers for insulation products will require burning 90 tons of coal and 1.6 million cubic feet of gas a day. An air permit issued by the West Virginia Department of Environmental Protection allows for the factory to emit 156,000 tons of pollutants per year, including formadehyde (a neurotoxin), three known carcinogens, and hazardous air pollutants (HAPs).

Rockwool said it “reaffirms its commitment” to fund an air monitoring program for three years with the installation of air monitors at two elementary schools, according to a press release.

Board of Education President Kathy Skinner declined to comment on the settlement.

The Board of Education—along with the County Commission, the City of Ranson, the economic development council and others—signed a payment-in-lieu-of-taxes (PILOT) agreement with Rockwool in 2017.

Rockwool filed its lawsuit against the Board of Education in federal court. In a preliminary hearing, Judge Gina Groh sided with Rockwool against the school board, ruling that it could not proceed with condemnation in state court and that a reasonable jury would conclude that the Board of Education was “motivated by bad faith.” She was persuaded that the school board voluntarily entered into an agreement with Rockwool with the signing of the PILOT.

“Private property rights should be protected from bad faith and arbitrary government action,” she said.

Dr. Bondy Shay Gibson testified at the hearing that there has been a 25% increase in students diagnosed with autism in Jefferson County since 2017, and a 300% increase in high needs students. These figures include those in general population who are affected by addiction and domestic violence, and many of them have been hospitalized for self-harm. The RSSC would provide social and emotional support, she said. 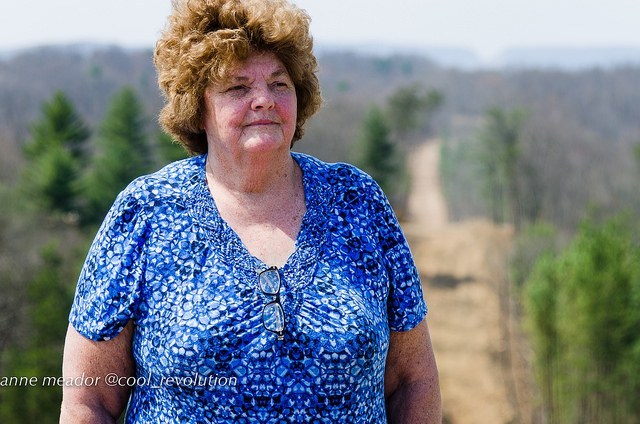 Patricia Kesecker stands in front of the right-of-way of the Mountaineer Gas PIpeline, which cuts through her 100-acre farm in the Eastern Panhandle./Photo by Anne Meador

Prime land on Patricia Kesecker’s farm in Morgan County was condemned by Mountaineer Gas. She and her husband challenged the condemnation in court, but a judge ruled against them.

After the Maryland Board of Public Works denied Columbia Gas, a subsidiary of TC Energy, an easement across the Maryland Rail Trail to build a pipeline that would cross the Potomac River, the company is attempting to use eminent domain to force the state to yield the land. The certificate granted by the Federal Energy Regulatory Commission is the basis for their claim. The pipeline would feed gas to the Mountaineer Gas pipeline, which would then transport it to the Rockwool factory.