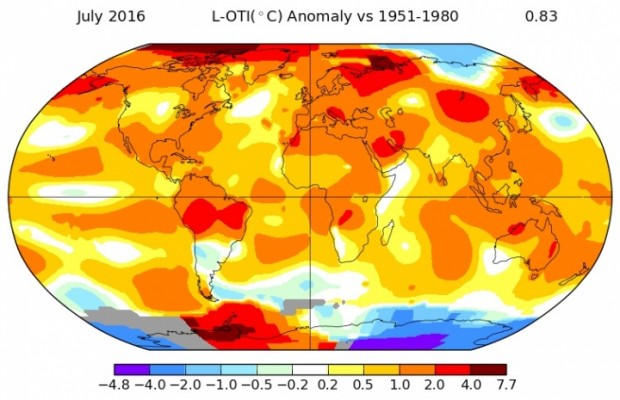 Above Photo: From climatecentral.org

The reign of record hot months in 2016 continues, with last month claiming the title of hottest July on record globally, according to data released by NASA on Monday. This July was also the hottest month on record for the world.

The streak means that 2016 is still well on its way to upsetting last year as the hottest year on record. Or as Gavin Schmidt, director of NASA’s Goddard Institute of Space Studies, said on Twitter, there is still a 99 percent chance 2016 will take the top slot.

Every month so far this year has been record hot. In NASA’s data, that streak goes back to October 2015, which was the first month in its data set that was more than 1˚C hotter than average.

In NOAA’s records, the streak of hottest months goes back to May 2015. If July is record warm in its data (which will be released Wednesday, July will be the 15th record-warm month in a row.

By NASA’s reckoning, July 2016 was 1.27˚F (0.84˚C) hotter than the 1951-1980 average. It was 0.2˚F (0.11˚C) above July 2015, the next warmest July in records that go back to 1880. The record July heat also means this was the hottest month the planet has seen over the course of NASA’s records. That’s because July is also generally the hottest month of the year due the fact that it’s summer in the northern hemisphere where there’s more land.

July 2016 was absolutely the hottest month since the instrumental records began. pic.twitter.com/GQNsvARPDH

Schmidt said he expects July will be the last record hot month of this year as the residual heat from an exceptionally strong El Niño dies away. Though El Niño itself was declared over in June, global temperatures tend to lag by about two to three months.

While El Niño provided a boost to global temperatures this year, the bulk of the heat is what has been trapped by accumulating greenhouse gases in the atmosphere.

Nations have agreed to keep the rise of global temperatures below 2˚C (3.6˚F) by the end of this century, and are discussing aiming for an even more ambitious 1.5˚C (2.7˚F). But temperatures for the year-to-date have been hovering close to 1.5˚C above preindustrial times all year.