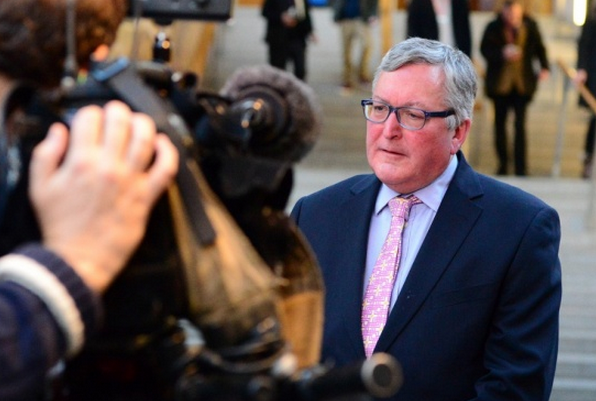 The Scottish government has announced a moratorium on all planning consents for unconventional oil and gas extraction, including fracking.

Welcomed by campaigners as “a very big nail in the coffin for the unconventional gas and fracking industry in Scotland”, energy minister Fergus Ewing told the Scottish parliament on Wednesday afternoon that the moratorium would allow time for the government to launch a full public consultation on the controversial drilling technique, and to commission a full public health impact assessment.

Westminster MPs on Monday defeated an attempt to impose a UK-wide moratorium but the coalition government had to accept several Labour proposals to tighten regulation of shale developments.

“Given the importance of this work it would be inappropriate to allow any planning consents in the meantime,” Ewing told the Holyrood chamber, to applause. “I am therefore announcing a moratorium for the granting of planning consents on all unconventional oil and gas extraction including fracking.” He said that the Scottish government would also be working to further strengthen planning guidance and strong environmental regulation.

Acknowledging that local communities would bear the brunt of any developments, Ewing said that a public consultation “will allow everyone with a view to feed it in to government”.

He added that the government would take evidence from all interested parties, including chemical giant Ineos which owns Grangemouth oil and gas refinery and has acquired 729 square miles of fracking exploration licences around the central belt.

Dr Richard Dixon, director of Friends of the Earth Scotland, described the announcement as a “huge victory for the communities, individuals and groups who have been campaigning to stop this dirty industry in Scotland”.

He added that he believed any serious examination of the mounting evidence would inevitably lead to a ban.

“The Scottish government has acted decisively today to protect communities across the country and the environment from this unnecessary industry.

“While we are calling for an outright ban, a halt on the industry while a full examination of health and environmental impacts is carried out is very welcome. Scotland joins France, Ireland, the Netherlands and New York State in a long list of countries and regions which have acted to stop the unconventional gas industry. We are convinced that a proper examination of the mounting evidence of health and environmental concerns must lead to a full ban.”

Asked in the Holyrood chamber by Scottish Green MSP Alison Johnstone why he would not impose an outright ban on fracking, Ewing reiterated that the Scottish government wanted “a national debate which is characterised by examining the evidence”. He said that the moratorium would apply until process of evidence gathering and consultation has been concluded, and that the public consultation was likely to be launched within the next two months.

WWF Scotland director Lang Banks also welcomed the Scottish government’s decision to impose the UK’s first moratorium on onshore unconventional oil and gas, but cautioned that it did not fully shut the door on new fossil fuel extraction.

“There is overwhelming public opinion in favour of cleaner forms of energy and a sufficient body of evidence why unconventional oil and gas are neither good for people or the planet. While this rightly puts a hold on fracking for now, we hope the final decision will be to rule it out completely.”

The Scottish Labour leader Jim Murphy wrote to first minister Nicola Sturgeon on Monday, urging her to adopt his party’s triple lock proposal on fracking, which includes a local referendum before final planning approval is given. The SNP in turn criticised Scottish Labour MPs for failing to support Monday’s amendment to the infrastructure bill calling for a UK-wide moratorium, which the majority of SNP MPs voted for.

Ken Cronin, chief executive of Ukoog, the trade body that represents the sector, said that industry welcomed the consultation. “We recognise that the general public have concerns about the issues around fracking and welcome this opportunity to present the facts to the Scottish people. Many independent reports, including the independent panel set up by the Scottish government, have commented that a robust regulatory process is substantially in place. Scotland needs to produce its own oil and gas for both economic and energy security reasons.”

Public opposition to fracking in Scotland, which gained a high profile during last summer’s independence referendum campaign, has grown in momentum over the past six months with local opposition groups forming in particular around the central belt where Ineos was concentrating its activities. An online poll by Usurvof public opinion on fracking across the UK found that Scots were most likely to oppose the practice, with 54% saying they were against it, and less than 8% happy for it to happen elsewhere.

Full control over fracking is due to be devolved to Scotland after May’s general election, following recommendations of last November’s Smith commission. On Tuesday, the Welsh first minister Carwyn Jones said that he believed that fracking licensing should also be devolved to Wales, and that the Welsh parliament should consider a moratorium on fracking.