A bill with the potential to hobble government agencies’ ability to propose regulations, known as the REINS (Regulations from the Executive in Need of Scrutiny) Act, has passed in both chambers of the Wisconsin Legislature and Republican Governor Scott Walker‘s office has told DeSmog he intends to sign it into law.

REINS has been pushed for years at the federal level by Americans for Prosperity (AFP), the conservative advocacy group funded and founded with money from Koch Industries, and a federal version of it currently awaits a U.S. Senate vote. The House bill, H.R. 26, passed on January 5 as one of the current Congress’s first actions.

Wisconsin’s version mandates that if a proposed regulation causes “$10 million or more in implementation and compliance costs” over a two year period, that rule must either be rewritten or go by the wayside. Known as Senate Bill 15, the Wisconsin bill passed the state Senate on a party-line vote, 62-34 and would be the first state-level REINS bill on the books in the country.

“Governor Walker has thanked the Legislature for sharing his commitment to bold regulatory reform and looks forward to signing the bill into law,” Jack Jablonski, a spokesperson for Governor Walker, said in a statement provided to DeSmog. Jablonski did not provide a timeline as to when Walker plans to sign the bill.

Walker has a storied history of close ties to the petrochemical billionaire brothers David and Charles Koch, including getting punked into taking a phone call with a David Koch impersonator back in 2011, who was actually a reporter with the Buffalo Beast, an alt-weekly newspaper in New York. Walker has taken tens of thousands of dollars in campaign contributions from Koch Industries, both during his three successful gubernatorial elections and during his short-lived run for president during the 2016 election cycle, which saw Walker ascend as the Koch brothers’ chosen candidate.

Wisconsin-based Koch businesses which release air and water pollutants could benefit financially from the bill if it becomes law. Koch Industries owns subsidiaries including Georgia-Pacific, Flint Hills Resources, and Koch Minerals, which in turn own assets such as paper production mills, pipelines, and oil and gas storage facilities within Wisconsin.

AFP‘s Wisconsin chapter, which launched an advertising and lobbying campaign in support of the legislation, celebrated the bill’s passage in a press release disseminated through Facebook.

“The REINS Act — blocked by special interests in Washington — can be enacted in Wisconsin to reduce the costs and delays of overregulation,” Norquist said in a statement provided to another Koch-funded group, the McIver Institute, which is a member of the Koch-funded State Policy Network. “By becoming the first state to pass a state version of the REINS Act, Wisconsin will further solidify its reputation as one of the nation’s top government reforming states.”

Wisconsin Rep. Dianne Hesselbein, the Assembly Assistant Minority Leader who serves on the Committee on Natural Resources and Sporting Heritage, attempted to introduce several amendments to the bill, according to legislative drafting files obtained by DeSmog.

But those amendments, which would have essentially rolled back the key anti-regulatory language found within REINS, never received a vote. One of the amendments banned firms which have employed lobbyists within the past five years from performing the economic impact statement, while another called for the economic impact statement to calculate benefits from keeping regulatory safeguards in place. Yet another of Hesselbein’s amendments called for the limit to be raised to $20 million for the law to apply to regulations proposed by the Wisconsin Department of Natural Resources. 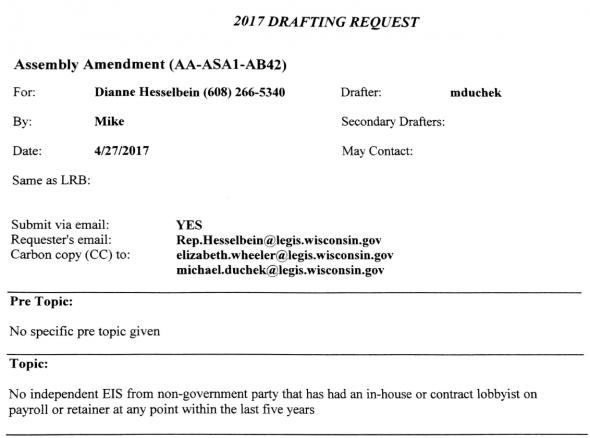 “It’s unfortunate the amendments weren’t even considered during debate on the bill,” Hesselbein told DeSmog. “We were sincere in our efforts to work with the bill authors to improve the legislation and ensure the enactment of important agency rules aren’t derailed by outside interests at the eleventh hour.”

On the Assembly floor, Republican bill sponsor Rep. Adam Neylon said he was willing to work with Democratic colleagues to address the potential for a contracted lobbyist or lobbying group to write the economic impact statement dictated under the REINS Act. Neylon, who received a $1,000 campaign contribution from AFP for his successful 2016 electoral run, said having a lobbyist involved in the process would be “nefarious” (see video beginning at about 3:38:08) and is willing to work with Democrats on a follow-up bill.

“I’m troubled by the author of this legislation openly acknowledging the nefarious role industry lobbyists and political insiders could play in undermining the enactment of rules that are meant to protect our health and our environment,” Hesselbein said in response to Neylon’s statements.

Hesselbein, who represents a district just west of the state capitol city of Madison, sees the bill in general as a giveaway to industry lobbyists and corporate interests.

“The so-called REINS Act will undoubtedly move Wisconsin towards a rule-making process that will become marred by industry lobbyists with political agendas working to undermine the enactment of legislation aimed at protecting the public good,” said Hesselbein.