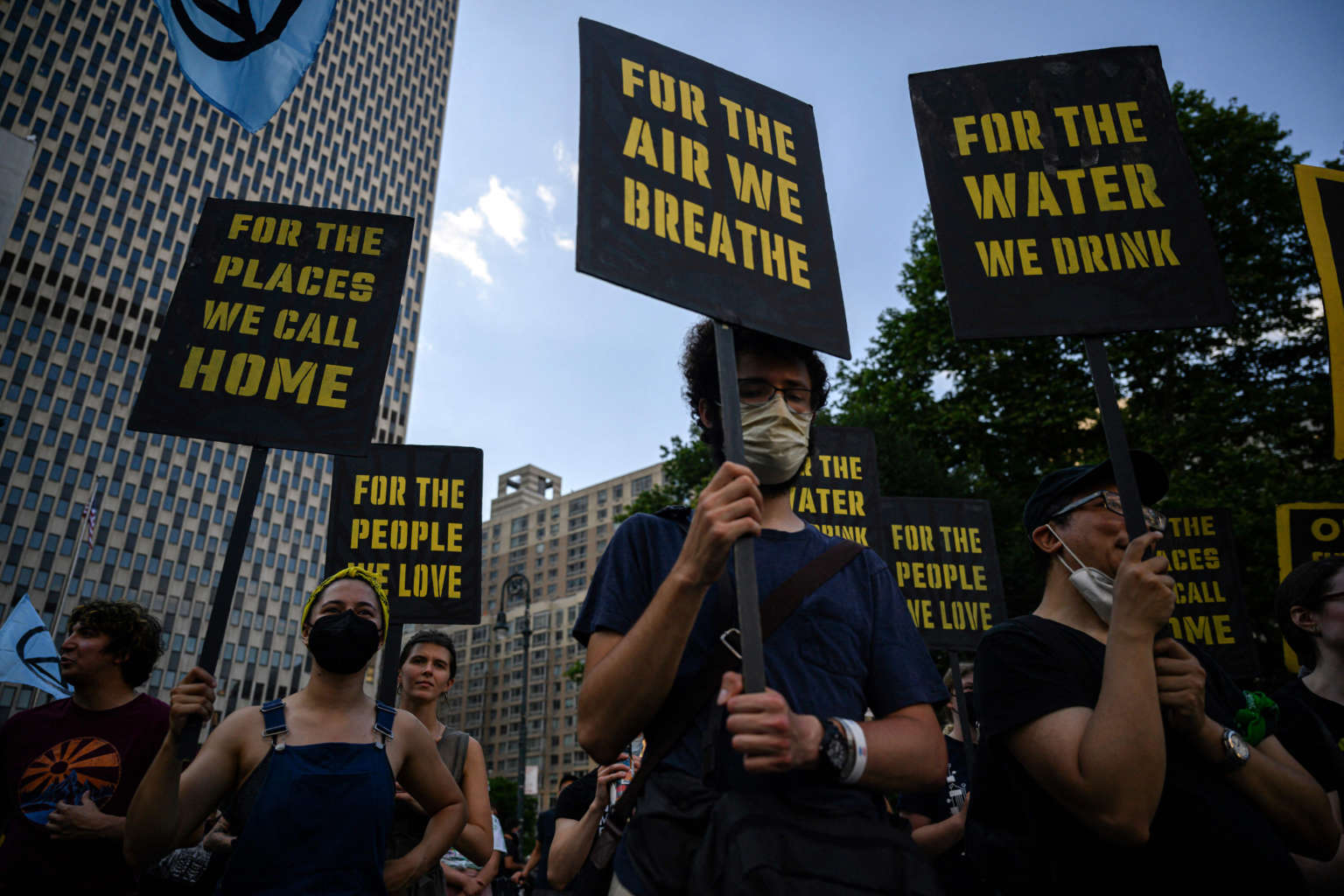 On the last day of its term, the Supreme Court handed down a case no less impactful than its shameful ruling a week earlier that overturned Roe v. Wade. In West Virginia v. EPA, the court’s right-wing members confirmed they are in the pockets of the fossil fuel companies. The 6-3 majority sided with coal companies and Republican-led states to restrain the Environmental Protection Agency’s (EPA) power to regulate carbon emissions.

“Capping carbon dioxide emissions at a level that will force a nationwide transition away from the use of coal to generate electricity may be a sensible ‘solution to the crisis of the day,’” Chief Justice John Roberts wrote on behalf of himself, Clarence Thomas, Samuel Alito, Neil Gorsuch, Brett Kavanaugh and Amy Coney Barrett. But “it is not plausible that Congress gave EPA the authority to adopt on its own such a regulatory scheme.”

This frightening decision could preempt new regulations the Biden administration’s EPA is developing to fight climate change. It will be nearly impossible for President Joe Biden to meet his climate goal that half of all new cars sold in the United States be electric by 2030, and all electricity come from solar, wind and other zero-carbon sources by 2035.

“Today, the Court strips the [EPA] of the power Congress gave it to respond to ‘the most pressing environmental challenge of our time,’” Elena Kagan wrote in the dissent joined by Stephen Breyer and Sonia Sotomayor.

In 2015, President Barack Obama’s EPA adopted the Clean Power Plan (CPP) to enforce the Clean Air Act. The CPP aimed to combat climate change by reducing carbon emissions from power plants through the “best system of emissions reduction” — by shifting the production of electricity to solar, wind power or fracked gas plants. It sought to transition from 38 percent coal to 27 percent coal by 2030. The Supreme Court suspended the implementation of the CPP in 2016 after several states and private plaintiffs challenged the plan.

The Trump administration repealed the CPP in 2019 and replaced it with the Affordable Clean Energy Rule (ACE Rule), a much weaker program. It granted states the ability to set regulations and gave power plants flexibility in complying with them.

Last year, the Court of Appeals for the D.C. Circuit halted both President Donald Trump’s repeal of the CPP and the ACE Rule and sent the case back to the EPA. The appellate court took issue with the Trump administration’s narrow interpretation of the EPA’s authority.

On June 30, the Supreme Court reversed the Court of Appeals’s ruling. For the first time, the majority explicitly used the “major questions doctrine,” which requires that Congress clearly spell out the powers of an administrative agency to make “decisions of vast economic and political significance.”

The court however, has increasingly utilized the rationale of the “major questions doctrine” without using those words, recently reversing the Biden administration’s attempts to tackle the COVID-19 pandemic.

In an unsigned majority opinion that denied the authority of the Centers for Disease Control and Prevention to stop evictions, the court stated, “We expect Congress to speak clearly when authorizing an agency to exercise powers of vast economic and political significance.”

And the court struck down a rule promulgated by the Occupational Safety and Health Administration (OSHA) to mandate vaccines or periodic testing of employees in large companies. Gorsuch wrote in a concurring opinion in that case, “The agency claims the power to force 84 million Americans to receive a vaccine or undergo regular testing. By any measure, that is a claim of power to resolve a question of vast national significance. Yet Congress has nowhere clearly assigned so much power to OSHA.”

Kagan wrote in dissent in the EPA case that Congress “broadly authorized EPA” to choose the “’best system of emission reduction’ for power plants…. The ‘best system,’ full stop — no ifs, ands, or buts of any kind relevant here.” She noted that the parties didn’t dispute that the EPA’s method “is indeed the ‘best system’ — the most effective and efficient way to reduce power plants’ carbon dioxide emissions.”

“Whatever else this Court may know about, it does not have a clue about how to address climate change,” Kagan wrote. “And let’s say the obvious: The stakes here are high. Yet the Court today prevents congressionally authorized agency action to curb power plants’ carbon dioxide emissions.” She adds, “The Court appoints itself — instead of Congress or the expert agency — the decisionmaker on climate policy. I cannot think of many things more frightening.”

Kagan cites the likelihood that, “If the current rate of emissions continues, children born this year could live to see parts of the Eastern seaboard swallowed by the ocean.” She cautions, “Rising waters, scorching heat, and other severe weather conditions could force ‘mass migration events[,] political crises, civil unrest,’ and ‘even state failure.’”

EPA Administrator Michael S. Regan responded to the court’s ruling: “At this moment, when the impacts of the climate crisis are becoming ever more disruptive, costing billions of dollars every year from floods, wildfires, droughts and sea level rise, and jeopardizing the safety of millions of Americans, the Court’s ruling is disheartening.”

Fewer than half the states have passed substantial climate change policies. California leads the country in requiring that by 2035, all new cars sold there be electric or zero-emission. Seventeen other states are slated to follow suit. By 2045, 100 percent of electricity in California must be generated from zero carbon sources. Twenty-one additional states have clean electricity requirements and others are considering even stricter standards.

In her dissent, Kagan pointed out that the majority opinion and particularly Gorsuch’s concurrence are suffused with an “anti-administrative-state” analysis. Indeed, when Gorsuch was nominated to the Supreme Court, the nonprofit group Alliance for Justice warned of the danger of Gorsuch’s practice of second-guessing agency experts: “It is difficult to overstate the damage [Gorsuch’s] position would cause. Judge Gorsuch would tie the hands of precisely those entities that Congress has recognized have the depth and experience to enforce critical laws, safeguard essential protections, and ensure the safety of the American people.”

The court’s decision sends an ominous signal that it will use the major questions doctrine to strike down other regulations that limit corporate profits. It could restrict the ability of federal agencies to regulate workplace safety, health care, product safety, water protections, vehicle safety, telecommunications and the financial sector.

By eliminating the constitutional right to abortion, and curtailing the authority of the EPA to halt climate disruption, the conservative members of the court have proven they are loyal foot soldiers in the right wing’s 50-year crusade to create a capitalist theocracy.

With the right-wing majority entrenched on the high court, we can expect to see future rulings affirming fewer regulations on industry and more regulation of personal privacy rights.