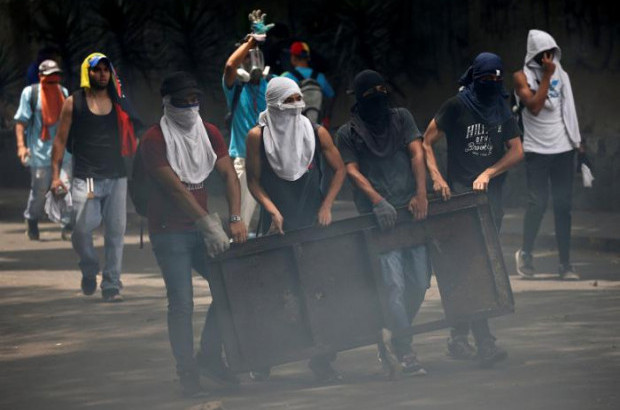 Script For Plans To Destroy Bolivarian Revolution Was Written In Washington

Above Photo: Protests in Venezuela have become more violent and better organized as projected in non-conventional warfare strategy. Photo: AVN

The U.S. doctrine of non-conventional war is based on manipulating citizens to encourage confrontations with authorities, to achieve the strategic objectives of a foreign power without having troops on the ground

Finding just one of these techniques that has not been used against Venezuela’s Bolivarian Revolution is difficult.

Unlike traditional conflicts, non-conventional wars are based on promoting confrontations between authorities and the population, to undermine the government’s ability to function, leading to its demise without the use of a foreign military intervention.

Perhaps the clearest example of this kind of warfare is the operation carried out by U.S. and Western powers against the government of Muammar Gaddafi in Libya. Bands of opponents, armed and advised from abroad, carried out the dirty work on the ground, while NATO provided air support, and the transnational corporate media manipulated the facts presented to the public.

As soon as the possibility of an independent leader like Hugo Chávez winning the Presidency came onto the horizon – in the country with the world’s greatest proven oil reserves – a strategy to overthrow him was activated.

Given the fact that the corrupt 4th Republic was entirely discredited, the first steps were taken to organize a new opposition and recruit younger leaders. It was the U.S. Agency for International Development (USAID) that channeled funds to create political parties and train many of the leaders of the current Democratic Unity Coalition (MUD).

U.S. Special Forces manuals, like Training Circular 18-01, define seven different stages of non-conventional war. The first few are devoted to “psychological preparation,” to unify the population in opposition to the government, and “initial contact” by special services agents on the ground. Subsequent stages include the extension of anti-government actions, moving toward a “transition,” during which the national government’s control of the country is challenged.

Despite the defeat of the 2002 coup attempt – by a massive mobilization of the Venezuelan people – the idea of taking the streets was never abandoned. Chávez was confronted by protests and sabotage, of different proportions, until his very last days.

When the Bolivarian leader died in March of 2013, and his successor Nicolás Maduro took the reins, the right wing and their foreign advisers activated the most aggressive tactics of their non-conventional war strategy, in hopes of dealing the revolution a final blow.

The mounting violence of protests taking place recently in Venezuela is reminiscent of the street barricades and fighting (guarimbas) which occurred in February of 2014, leaving 43 dead and more than 800 injured.

At that time, extremists, who emerged in protests allegedly composed of students, went so far as to string cables across streets to decapitate motor cycle riders, and caused millions of dollars in damage to public property, with the objective of sowing panic and paralyzing the country.

But this last wave of violence appears to be better organized and more extensive. Some of the scenes reported are totally senseless, defying all logic.

The attack by armed opposition gangs on the Hugo Rafael Chávez Frías Maternal-Infant Hospital, with 54 children inside, would qualify as a war crime before any international court.

It is not difficult to identify the organized groups in marches – holding shields, wearing gas masks, and waving blunt objects. If the protests are supposed to be peaceful, why do these youth come prepared for a fight?

A video recently released by Venezuelan authorities shows a dozen youth wearing hoods and making Molotov cocktails, during a march in the comfortable East Caracas neighborhood of Altamira.

After the arrest of Nixon Leal, a violent subject linked to several MUD leaders,

Vice President Tareck El Aissami presented evidence about how the armed bands are organized to carry out open confrontations with the government in Caracas and other important cities, clearly following the steps outlined in non-conventional war strategy.

Threats to authorities are not only physical, but are also meant to humiliate, as seen in the recent practice of using human excrement to fabricate homemade bombs called “Puputovs”.

One aspect of non-conventional war, which is key to its success, is the symbolic dimension, especially in the construction of realities via the mass media, even more so in hyper-connected societies where many use social networks to find out what is happening just a few meters away from their own homes.

Sometimes with greater intensity than in the streets, Venezuelan cyberspace functions as a battle field, in which it is difficult to differentiate accurate information and what authorities have identified as fake news, or “false positives.”

Making its way across the planet this month was an image of two Venezuelan youth, naked and tied to a tree in the state of Táchira, showing signs of a physical attack. Several international media, including Latin American ones, reported the act as the responsibility of Chavista “bands.” It was in fact linked to common criminal activity and residents of the area had decided to serve justice themselves.

The selectivity of the international corporate press, in terms of choosing what to report, is also used as a weapon. The same day that three million people marched in Caracas to show support for Nicolás Maduro, what dominated headlines on mainstream websites and newspapers were the much less attended opposition protests.

Also among non-conventional war tactics, is the creation of symbols with which any group could identify. The image of a woman dressed in a Venezuelan flag, standing in front of a Bolivarian National Guard armored vehicle, was publicized relentlessly, and went on to become the demonstrators’ icon.

Likewise, the number of photographers surrounding a young violin player, during an opposition protest, makes it hard to believe that this was a spontaneous act, and not a carefully staged one.

The Venezuelan right, traditionally divided given its personal rifts, with various individuals competing for power, is, on the contrary, united in following the non-conventional script written in Washington. Violence is the only common ground.

Repeated calls for street demonstrations, despite the fact that more than 40 lives have already been lost in this round of guarimbas, along with the opposition’s refusal to participate in the Constituent Assembly, make clear, once again, that the only solution the opposition offers is an end to the revolution, by any means and regardless of consequences.

The continuity of the social project begun by Hugo Chávez – which has forever changed the reality of this country to benefit the poor – is not all that is at stake.

The success of the opposition strategy would become a nefarious reference point for the use of non-conventional warfare, one that would be added to the list of coups, military interventions, and secret operations which bear the trademark signs of Washington at work in Latin America.