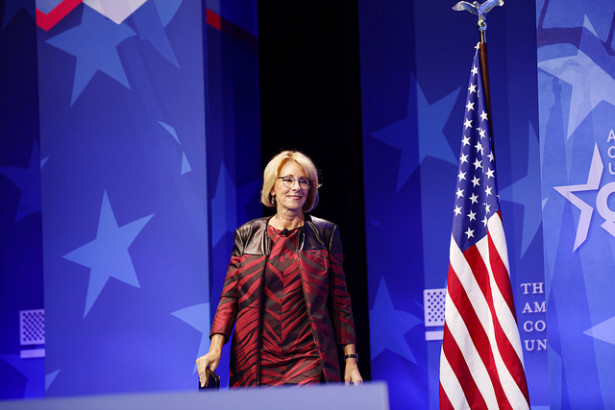 My name is Jesse Hagopian and I teach ethnic studies at Seattle’s Garfield High School. I hope you didn’t just stop reading this letter after you heard the subject I am teaching—I urge you to keep reading.

I am writing in regards to the Washington Policy Center’s $350-a-person fundraising dinner you will be addressing on October 13 at the Hyatt Regency in the nearby city of Bellevue. Thousands of my colleagues and I will surround the building to make sure the world knows your message of division is not welcome here.

Given the recent protests of your speeches at Harvard, at historically black Bethune-Cookman University, and many other places, you must be getting used to this by now. But just so there are no surprises, let me tell you what to expect.

There will be bull horns, signs, speeches, and I bet some of the more creative teachers—perhaps the few art teachers your proposed budget hasn’t cut yet—will show up in grizzly bear costumes, referencing the asinine comment you made defending the use of guns in schools to “protect from potential grizzlies.”

There will be students there questioning your qualifications to serve as Secretary of Education, given that they have more experience with the public schools than you. They might point out that you never attended public schools and neither did any of your four children.

There will be black people and civil rights organizations because you refused to say if the federal government would bar funding for private schools that discriminate. These anti-racist activists will protest your claim that Historically Black Colleges and Universities are “pioneers of school choice” as a way to promote privatizing public education—as if the segregation that forced African Americans to start their own colleges was a magnificent choice.

There will be feminists protesting your outrageous dismantling of title IX protections aimed at reducing sexual assault on campuses. Your decision to meet with sexist so-called “men’s rights” groups to decide on your approach to Title IX policy shows just how little regard you have for protecting victims of sexual assault. As Mara Keisling, executive director of the National Center for Transgender Equality, said recently, “She’s meeting with groups and individuals today who believe that sexual assault is some sort of feminist plot to hurt men.”

There will be transgender people and others in the LGBTQ community protesting your decision, with Attorney General Jeff Sessions, to pull back public school guidelines allowing transgender students to use bathrooms for the gender they identify with. And while you have stated you don’t support gay conversation therapy, according to the Washington Post, you served from 2001 to 2013 as vice president of the Edgar and Elsa Prince Foundation (founded by your mother) which donated to anti-LGBTQ groups that do.