Above Photo: Kshama Sawant addresses a crowd of “tax the rich” supporters outside at a rally before the vote.

“When we fight, we win” – Kshama Sawant

Today, Seattle passed a “tax the rich” income tax by a vote of 9-0. The ordinance plans to tax those with a total income in excess of $250k (single) and $500k (joint filers) at 2.25%. Based on 2014 IRS data, the city estimates it will be able to raise approximately $125 million a year, while total cost of administering the new tax would be $10-13 million the first year, followed by an ongoing $5-6 million a year thereafter.

As outlined in the ordinance, monies raised by this income tax must be spent in specific areas of the city budget, namely, “lowering the property tax burden and the impact of other regressive taxes; addressing the homelessness crisis; providing affordable housing, education, and transit; replacing federal funding potentially lost through federal budget cuts, including funding for mental health and public health services; creating green jobs and meeting carbon reduction goals; and administering and implementing the tax levied.”

Even though this may seem like cut-and-dry common sense legislation, this ordinance still has an uphill battle ahead of itself. Former Washington State Attorney Rob McKenna laid bare the main issues as follows:

The precedent alluded to above deals with a 1930s Washington Supreme Court decision that states “income is property, and the state’s constitution declares that all property must be taxed uniformly.” Since Seattle’s proposed income tax is a progressive tax and not “uniformly” distributed onto all tax brackets, the Supreme Court would have to redefine property.

Some critics have gone even further. Given the issues outlined above, Jason Rantz argues that the council members should have to pay for the ensuing legal battle personally for passing an income tax that, as he describes it, has no chance of making it past the Supreme Court. 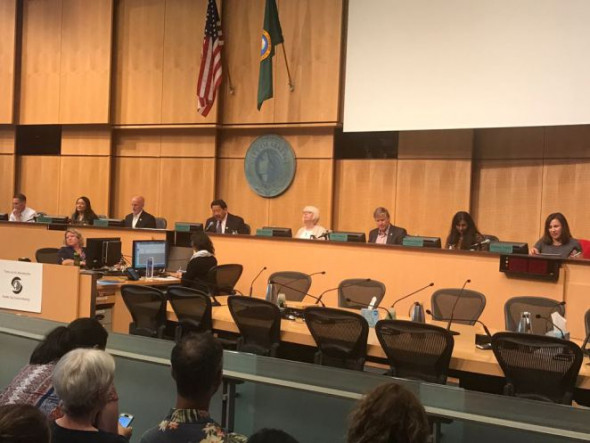 Given that Lisa Herbold and Kshama Sawant sponsored the progressive city income tax, I reached out to hear not about the tax itself, as I think it stands on its own, but the legal issues associated with it. Sawant tells the Progressive Army:

Our movement anticipates that big business, the right wing, and the wealthy in this state will try and challenge this Seattle law in the supreme court. But history shows that unjust laws need to be overturned and the only way to succeed is for ordinary people to build mass movements. Civil rights, and the more recent victories on marriage equality are examples that prove this. We are winning this law today to tax Seattle’s rich because socialists and activists have fought for it, through Socialist Alternative’s campaigns for city council elections in 2013 and 2015, and this year, through the Trump Proof Seattle Coalition. We didn’t win this by asking corporate politicians. If our tax the rich law is challenged in the supreme court, we’re going to need the same strategy of building grassroots campaigns to change state law so that we can overturn Washington state’s deeply regressive and unjust tax law status quo.

Such as the case during Seattle’s Fight for $15 movement, Sawant anticipates the same forces will be waiting to sabotage this measure.

This is a battle for tax justice and building a tax system that is fair to every income bracket. This is the first step in a long battle toward shifting away from Washington State’s regressive tax system. As with other successful progressive measures passed in Seattle, this measure has strong support, evidenced by the turnout at each step of the process, pushing Seattle leadership in line.

Everyone that spoke in support of the income tax measure also spoke on their readiness to continue the fight in the predicted ensuing legal battle. Yet, as Kshama Sawant highlighted, “When we fight, we win.”