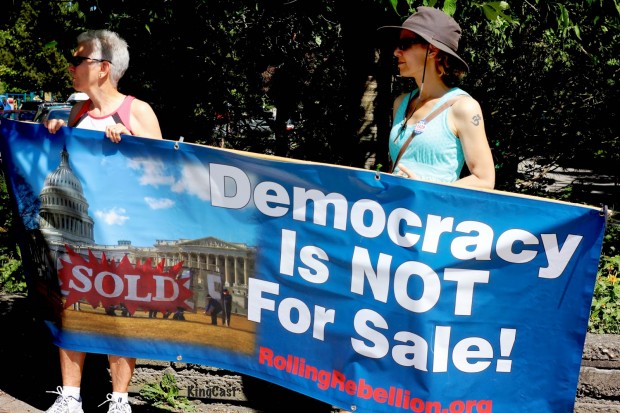 The Seattle Rolling Rebellion used artful activism to draw attention to getting money out of politics in a fun and engaging way at Greenlake and Woodland park in Seattle. They used giant puppets including a crazy six armed bloated corporate being with an ill-fitting human mask over a money bag scarecrow head and money leaking out everywhere. Each of it’s giant hands on a long snaky arm, is held up on a pole by judges with money and corporate logos on the robes and fat cats, sweeping the crowd, and intermittently capturing our Lady Liberty giant puppet. Luckily caped superheros wielding giant pencil swords come to the rescue and, free her.

The Rebellion had a fat cat stilter, and other props included “corporate people” and TV heads who chattered incessantly and urge the crowd not to pay any attention to what’s going on behind them in plain view, until shut off by superhero remote controls; and street band music to keep it all lively and inviting to spectators.

The group walked 1.5 miles along Greenlake on a very crowded hot day engaging the crowd all along the way, culminating with their final theater at the WAmend picnic site. They enjoyed a shady celebration of all the work they had done and accomplishments to date with many more WAmend volunteers who just finished gathering 175,000 signatures for I-1329 in Washington, and are thinking already of next steps.

This was the scene yesterday at Greenlake Park where the Rolling Rebellion served notice that it will continue to fight against the corporate octopus that has its poisoned tentacles in every spectre of our society. As you can see above, the Octopus seems to have Lady Liberty squarely in his sites. They are of course focused on corporate money in politics, the sort of money that influenced the worst First Amendment case in SCOTUS history, Citizens United. You know it’s a dirty case when Pols like U.S. Senator Kelly Ayotte cite to it as she has on several occasions such as at 2:00 into this video. And watch the video below, as she stumbles when confronted with the octopus question from a constituent. Watch for a minute or two starting at 1:30 in:

Meanwhile, homeowner Karen Pooley and I have put in for a First Amendment park permit for Friday, 11 July 2014 11am-2pm to allow all interested parties to sound off at Westlake Park south stage relative to proposed changes to the Uniform Commercial Code. Here is your event link, and one on SAFE in Seattle’s FB. Watch for a short video Tuesday highlighting this issue using yesterday’s footage. It is my belief that the changes are designed to in some ways merge U.C.C. Articles 3, 8 and 9 and make fraudulent, forged and otherwise legally untenable signatures perfectly legal, so that banks and servicers may more readily foreclose on American homeowners. All of this in the immediate wake of Montgomery County, PA Recorder Nancy Becker’s successful lawsuit against MERSCORP. I will speak briefly before tending to my camera duties, but the speakers lineup thus far includes:

Attorneys Ha Dao and Richard Jones, Seattle activist Jess Spears and Washington Senate Candidate Michelle Darnell.  Below the fold enjoy more pictures from yesterday and several points of analysis from Ms. Virani’s initial review.
This has become a major issue in both Florida and Texas. In Texas, there is no need for the foreclosing entity to present the note. There are several recent 5th Circuit Court of Appeals decisions that have emphasized this fact. In Florida, all a foreclosing entity needs to do is show up in court with what they call the “original note” without any further proof. This has led to foreclosing entities appearing in court with copies of the note claiming the copies are the originals.

While a note registry sounds like a good thing, it would just be another way to perpetuate the fraud. In essence, the banks have a registry for the notes and the notes were routinely scanned and put into that registry. The notes were then intentionally destroyed. It was these scanned notes that were negotiated and placed in “trusts”. Again, the UCC states that the intentional destruction of the note discharges the debt. The last item that is worrisome is the definition of “zombie properties”. The way it is worded, it sounds like the zombie properties are the fault of homeowners.

In Florida, the practice has been to accept a deed in lieu and then wait a few years until the homeowner is back on their feet. At that point, the banks file for a deficiency judgment and proceed with collection actions. To some extent, the foreclosure bill passed last year in Florida, reduced the time frame in which a foreclosing entity could seek a deficiency judgment from 5 years to 1 year. However, the 20 year time period in which the foreclosing entity could pursue collection of the deficiency judgment remained the same. This provision would put an end to that practice so that is good for homeowners. Lastly, let’s remember that the original Uniform Non-Judicial Foreclosure bill proposed by the ULC in 2000 was overwhelmingly rejected by all 50 states.

This bill has been resurrected by several state legislatures since the financial meltdown (including Florida which proposed it verbatim back in 2010) and rejected again. Florida tried for 3 years to get this passed and eventually, redesigned their bill which was ultimately passed.”