On July 26th a lively rolling picket of over 40 people marched through downtown Seattle, shutting down bank branches and occupying the lobbies of investment firm offices. HSBC, U.S. Bank, Prudential Financial, BlackRock Inc. and Barclays bank were targeted. All of these firms have financial relationships with GEO Group and CoreCivic, the primary private detention operators for Immigration and Customs Enforcement (ICE). The rolling picket, co-organized by Olympia Assembly and El Comite, comes on the heels of recent #DivestfromICE victories and is the latest in a series of divestment direct actions across the U.S. 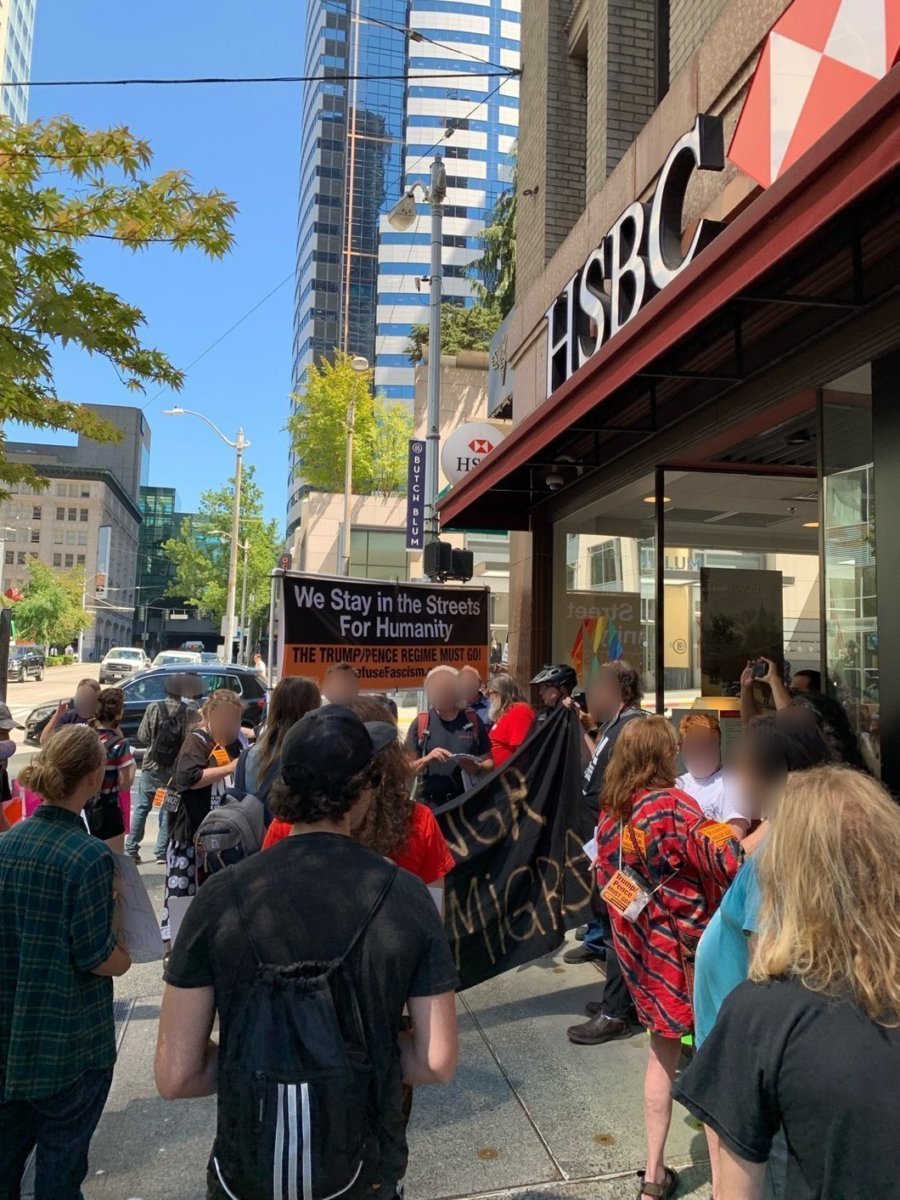 Protesters gathered in Westlake park and marched towards 6th/Union where they entered the lobby of Two Union Square, a large corporate building where both Prudential and BlackRock Inc offices are located. A security guard initially attempted to block the lobby entrance with their body leading to a brief scuffle with one protester. This distraction permitted others to enter the building lobby until the guard relented and all were able to pass unobstructed, chanting and distributing leaflets along the way. Protesters then marched across the street to occupy the bank lobby of HSBC, forcing bank staff to lock their doors to business. Immediately afterwards, the march entered Seattle’s main branch of U.S. Bank, passing out leaflets to bank staff and customers and blocking the primary entrance with a large banner. 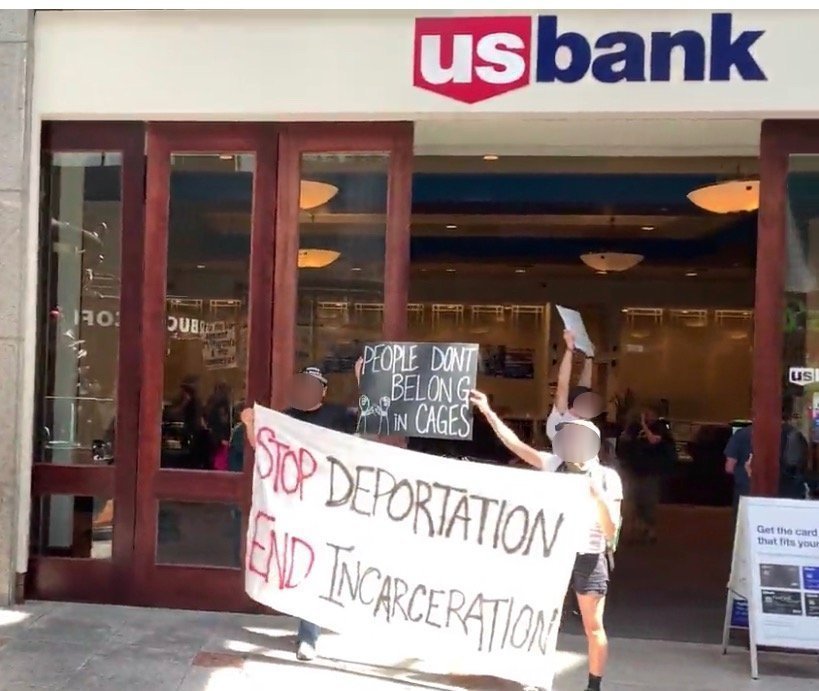 The march proceeded to the final target, the Columbia Center, where the office of UK-based investment bank Barclays is located. Anticipating the arrival of the march, lobby personnel had locked the main entrances and protesters were met with a line of bike cops. After picketing outside the lobby entrance the group decided to attempt other entrances and were able to find access along the side of the building. Once again, people chanted loudly and leaflets were distributed in the commercial lobby, receiving intrigue and support among retail workers and bystanders. The action concluded shortly thereafter. 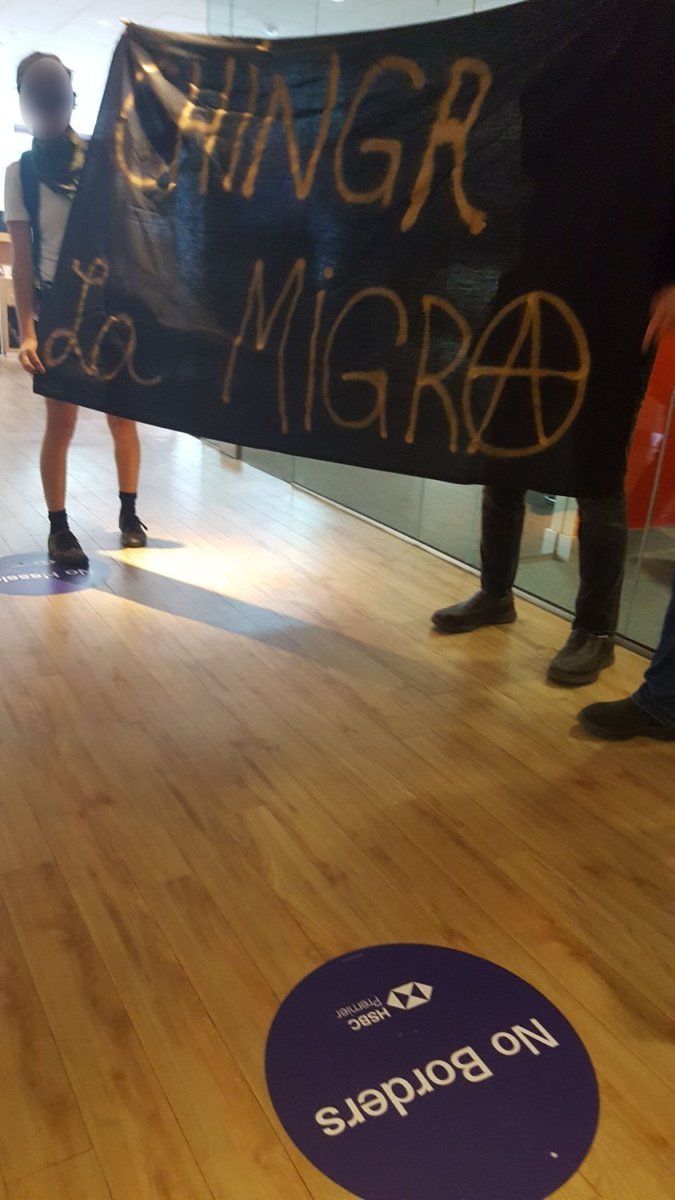 The majority of immigrant detainees (~70%) are imprisoned in detention centers operated by private prison companies like CoreCivic and GEO Group. These companies are structured as Real Estate Investment Trusts (REITs), which makes them reliant on financing from large financial institutions and vulnerable to credit loss. While recent divestment announcements have caused private prison stock prices to plummet, maintaining consistent pressure on these holdouts remains crucial. According to NASDAQ, Prudential Financial and BlackRock are some of GEO’s and CoreCivic’s largest institutional shareholders, owning stock totaling in the hundreds of millions of dollars between the two corporations. Other financial reports expose Barclays as a lender to GEO Group while HSBC and U.S. Bank are listed as bond “underwriters” for both GEO and CoreCivic. Bond underwriters enable the financing of migrant detention by purchasing bonds from the prison companies and reselling them to individual bondholders, securing a profit in the process. Moreover, U.S. Bank is the bond “trustee” for CoreCivic, an important administrative position.

Like blockades at detention centers or airports, financial streams are another artery within the deportation and detention infrastructure that can be clogged through direct action. With the divestment momentum growing, now is the time to intervene in this node.