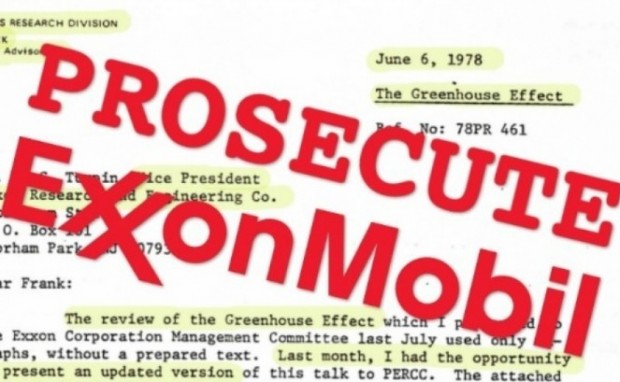 Above Photo: Exxon knew about global warming decades ago (and in fact launched its own extensive climate research program), yet spent US$30.9 million to support think tanks running climate denial campaigns from 1998 to 2014. (Image: Credo)

Wall Street Journal reporters observe the move may ‘signal the opening of a new front of climate-related regulation and enforcement at the SEC, a direction with far-reaching consequences for the oil and gas industry.’

In what is being hailed as “a remarkably important development,” the U.S. Securities and Exchange Commission has reportedly launched an investigation into whether Exxon Mobil deliberately deceived investors over the long-term value of its fossil fuel assets in light of the climate crisis.

Citing “people familiar with the matter,” the Wall Street Journal reported Tuesday that “[t]he SEC sought information and documents in August from Exxon as well as the company’s auditor, PricewaterhouseCoopers LLP. The federal agency has also been receiving documents that the company submitted as part of a continuing probe into similar issues begun last year by New York Attorney General Eric Schneiderman.”

In addition to “examining Exxon’s longstanding practice of not writing down the value of its oil and gas reserves when prices fall,” the federal probe “is also homing in on how Exxon calculates the impact to its business from the world’s mounting response to climate change, including what figures the company uses to account for the future costs of complying with regulations to curb greenhouse gases as it evaluates the economic viability of its projects,” the Journal reported.

Reporters Bradley Olson and Aruna Viswanatha said the investigation “represents an escalation of the legal questions Exxon faces over its past and future response to climate change.” Further, they observe that the probe “may also signal the opening of a new front of climate-related regulation and enforcement at the SEC, a direction with far-reaching consequences for the oil and gas industry.”

Environmental activist and 350.org co-founder Bill McKibben agreed that this marked “a remarkably important development” in the effort to hold the world’s largest publicly traded oil and gas company accountable for decades of suppressing scientific evidence related to global warming.

“This investigation marks a moment of reckoning for the corporation. Coupled with attorneys general investigations into Exxon’s campaign of climate denial, the SEC’s probe means the corporation’s days of deception are numbered.”
—Katherine Sawyer, Corporate Accountability International
“The federal government is joining the courageous state attorneys general, and they’re all following the trail of clues that began with powerful investigative journalism,” McKibben said, referencing reporting by the Los Angeles Times and Inside Climate News which first brought what is now known as the #ExxonKnew scandal to the public’s attention. “Before they’re done we’ll understand considerably more about how the world overheated—but in the meantime, every institution that invests in Exxon should take real note of who you’re keeping company with.”

“Exxon’s current market valuation is partly based on its proven reserves,” explained Leonard, “a giant bank of already discovered oil and gas deposits that it plans to someday exploit and sell. But in a world where we successfully tackle climate change, many of those assets would be left in the ground. Investors have a right to understand how Exxon’s profitability and value are threatened by common sense policies to address climate change, and the SEC seems to agree.”

“Right now Exxon is betting everything it has on the failure of the world to solve the climate crisis; the SEC has a chance to expose how weak Exxon’s hand really is,” she said.

“Millions of people around the globe have long demanded action to hold Exxon accountable,” said Corporate Accountability International senior international organizer Katherine Sawyer. “This investigation marks a moment of reckoning for the corporation. Coupled with attorneys general investigations into Exxon’s campaign of climate denial, the SEC’s probe means the corporation’s days of deception are numbered.”

The federal probe comes amid an ongoing public battle between the environmental groups and attorneys general spearheading the state-level investigations and Republican lawmakers on the U.S. House Committee on Space, Science and Technology, who have attempted to stymie the probes by issuing subpoenas to those involved.