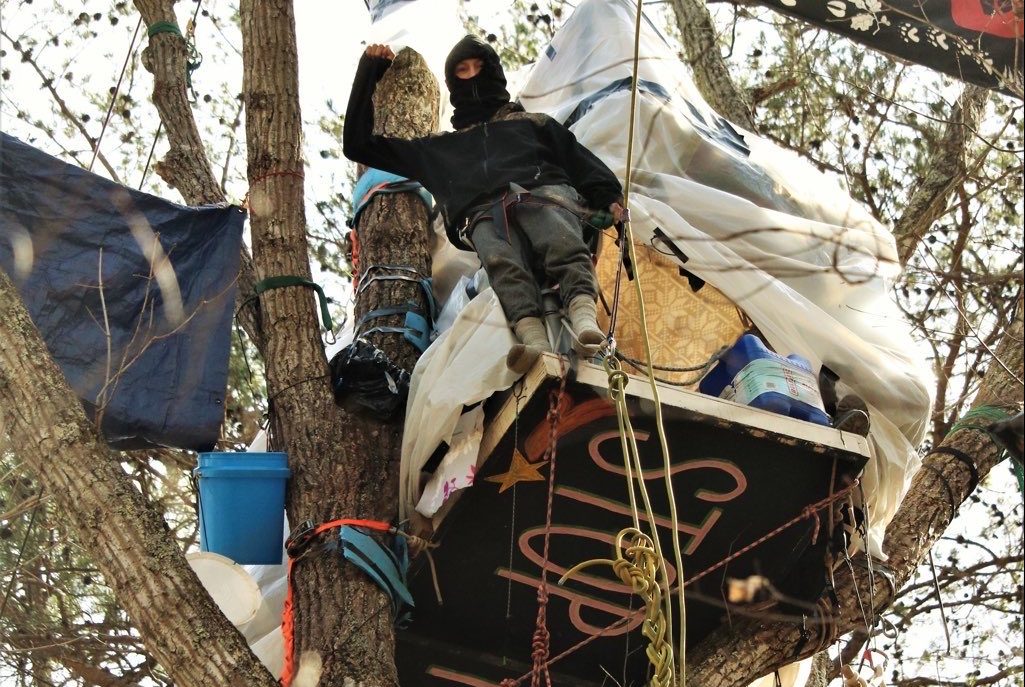 After Tuesday’s extraction, police remained on site overnight, shining spotlights at the remaining tree sit. MVP began work again this morning around 7 a.m. By 8 a.m., a rally of local supporters had formed nearby. Around 10 a.m., the large crane that police had brought on site began moving towards the remaining tree sitter, and around 12 p.m. they were cut from the lockbox that they had used to lock themself to the tree, extracted, and arrested.

It is currently unknown whether MVP has cut the trees that had previously been protected by the tree sitters. Doing so between March 15 – August 15 would violate Virginia Department of Wildlife Resources’ recommendations for protecting the habitats of migratory and resident songbirds.

Regarding the extraction of the tree sitters, Anne Lusby-Denham, member of the Southwest Virginia Poor People’s Campaign, Mountain Valley Watch, and Roanoke Mothers Out Front, stated: “I am a community activist and minister’s wife from Roanoke and am very concerned about the State Police extraction team’s removal of the Yellow Finch tree sitters. I do not think it is appropriate for police to be involved in helping the Mountain Valley Pipeline rather than the citizens of Virginia. It was a reckless and dangerous undertaking done for a corporation that is damaging our land, our water, and our communities. Neither Governor Northam or agencies such as DEQ are protecting us at all from the damages and our tree sitters have risked their lives. Our government agencies seem to have no shame, no moral compass, and I am losing respect for all of them!”

The Yellow Finch tree sit blockade was erected in the path of the Mountain Valley Pipeline on September 5, 2018. Last November, a Montgomery County court issued an injunction against the sitters and supporters on the ground, after which the ground support camp was vacated but tree sitters remained.

The Mountain Valley Pipeline is a 42-inch diameter, 300-plus mile, fracked gas pipeline that runs from northern West Virginia to southern Virginia, with a proposed 70-mile extension into North Carolina. The Mountain Valley Pipeline contributes to climate change, increases demand for natural gas (and as a result, fracking), and is entrenched in corrupt political processes. It endangers water, ecosystems, and communities along its route. Despite initial claims that the gas transported by the MVP would be for domestic use, MVP has since admitted that much of the gas is destined for overseas export. Furthermore, reports by energy analysis groups now claim that changing gas markets have diminished the need for the MVP. Although Mountain Valley Pipeline claims to be concerned for the health and safety of residents along the route and of people opposed to the pipeline, time and again this billion dollar private corporation has proven to care only about maximizing their profit — from flipping excavators on the job to causing landslides and sinkholes, MVP continues to risk the lives of residents, protesters, and even its own workers.

Currently, MVP’s construction is 3 years behind schedule (tripling the proposed construction schedule) and $2.7 billion dollars over budget — and counting. The company still lacks final approval for key permits, including those governing the Jefferson National Forest and water crossings along the route.