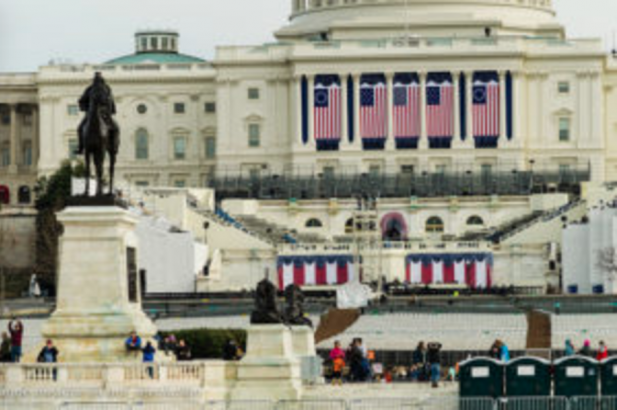 Above Photo: On Jan. 19, the Capitol building is readied for the Inauguration of Donald Trump./Photo by Anne Meador

Washington, DC–The Secret Service has denied credentialed press access to a protest space permitted to ANSWER Coalition along the Inauguration route at the Navy Memorial, according to Brian Becker, National Coordinator for the group.

Becker said that the Secret Service is not granting press permits to set up stands to cover the protest area between 7th and 9th Streets NW, which falls midway along the route Donald Trump’s motorcade will pass after he is sworn in as the 45th President.

An ANSWER Coalition press release condemned the action an “outrage” and “a blatant act of political discrimination and a grave threat to free speech and the right to dissent in the Trump Era.”

“Media has always been able to go to the Navy Memorial in the past and now, just a few days before thousands of protesters are expected to gather there for a peaceful protest, news teams and cameras are suddenly told they will be banned from entering,” the release said.

The group was notified by several credentialed press and a major national TV news network, which it did not identify, “that they will not be allowed access to the Navy Memorial on January 20th to cover the major protest taking place there along Trump’s Inaugural Parade Route,” Becker said.

This isn’t the first obstacle that ANSWER Coalition has encountered in staging a protest at the Inaugural parade. It had planned to protest at Freedom Plaza, an area on Pennsylvania Ave. which is much closer to the White House and has the advantage of being elevated and highly visible.

But Becker says ANSWER “only got a small sliver of Freedom Plaza” because the Presidential Inaugural Committee gets to put bleachers along the street there. The group filed a complaint in court against giving the Inaugural Committee priority, contending that bleacher seating allowed unconstitutional restraint on dissent and promoted a pro-government bias. But on Monday a judge ruled that the bleachers could stay, since, in his view reserved bleacher seating is “content-neutral.”

Becker disagrees. Getting tickets for bleacher seating requires a connection to presidential campaign, he said. The Inaugural Committee hands out tickets as a “premium” for donations and support to the campaign. In his opinion, people sitting there would naturally be in favor of the incoming president and not inclined to dissent.

The permitted area at Navy Memorial however is larger, and ANSWER Coalition plans to set up a stage and feature speakers, musicians and artists. Get there early, Becker advises, no later than 7 am.