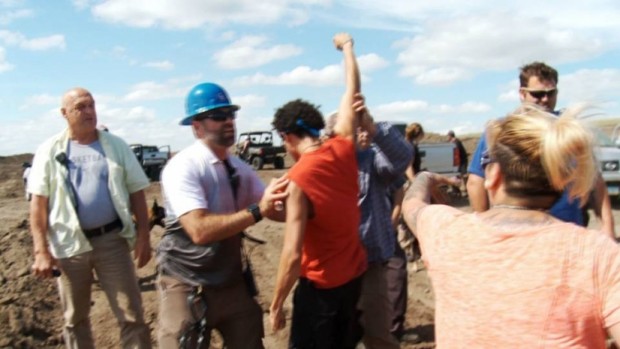 G4S, a company hiring security staff to guard the hotly contested Dakota Access pipeline (DAPL), also works to guard oil and gas industry assets in war-torn Iraq, and has come under fire by the United Nations for human rights abuses allegedly committed while overseeing a BP pipeline in Colombia and elsewhere while on other assignments.

Recently, the UK-based G4S placed job advertisements on its website, announcing it would be hiring security teams to work out of offices in Mandan and Bismarck, North Dakota. These two locales are only a 45-minute drive away from the ongoing Standing Rock Sioux Tribe-led encampment unfolding along DAPL‘s route in Cannon Ball, North Dakota. First among the list of required experience for both locations is service related to military police, elite military forces, or “any support role in a combat zone.”

Lewman-Garcia also stated that G4S was not on the scenes at the now-infamous Labor Day weekend incident in which private security forces used pepper spray against and allowed their dogs to bite Dakota Access pipeline protesters, adding that the company had not deployed its K9 units and that those involved worked for a different company. G4S also said it could not comment on whether it was hired to be in North Dakota by Dakota Access LLC, by another company altogether, or by one of the local police departments.

Dubbed the “Chaos Company” in an April 2014 Vanity Fair article, G4S is often brought into the stickiest situations, such as overseeing security for the Basrah Gas Company, an Iraqi natural gas company which Shell, Mitsubishi, and South Oil Company jointly own.

G4S touts its expertise in doing high-risk security work for the oil and gas industry in a company pamphlet:

“In Nigeria, for example, its services include the provision and manning of emergency vessels operating in the Niger Delta for Chevron. It also has a considerable presence in Iraq where it is well placed to assist in the protection of the war-torn nation’s oil production which could make that country the third largest oil exporter within a few years.”

An article published by The Telegraph (UK) detailed that G4S had been hired to bring 500 personnel and 220 armored vehicles to protect Basrah Gas Company properties in Iraq. Those properties include two gas plants, a liquefied petroleum gas storage facility, a shipping terminal, and — paralleling the Dakota Access situation — the pipelines between them.

G4S also has security contracts with the U.S. Department of Defense at both Guantanamo Bay Detention Center and the controversial U.S. military base in Diego Garcia. The British human rights group Reprieve called for an investigation of G4Sas it pertains to human rights abuses which took place at Guantanamo.

In 2008, G4S acquired the company ArmorGroup International PLC as a wholly-owned subsidiary. This company has been on the public radar in recent years for being mired in a human trafficking scandal in Afghanistan while guarding the U.S.Embassy in Kabul on a U.S. State Department contract. The U.S. Department of Justice had sued ArmorGroup for allegedly violating the Trafficking Victims Protection Act, settling the lawsuit in 2011 for $7.5 million.

Less well-known is that ArmorGroup has roots connecting it to other human rights abuses and controversial tactics on behalf of multinational oil and gas companies through its precursor, Defense Systems Limited (DSL), a firm founded in 1981, according to a company fact sheet no longer online acquired by DeSmog. ArmorGroup purchased DSL as a wholly-owned subsidiary in 1997.

“The company defended gold and diamond mines in Africa from thieves, and oil pipelines in Latin America from guerrillas,” wrote The Financial Times in a 2005 article. “It guarded U.S. and British embassies in the Middle East and elsewhere. Often, DSL would use former British special forces troops to train foreign forces in counterterrorist tactics.”

In the late-1990’s, DSL found itself in a human rights-related quagmire, revealed first in the 1997 documentary, BP‘s Secret Soldiers, and then in a 1998 investigation published by The Guardian (UK) and El Espectador of Colombia.

The joint inquiry by the newspapers demonstrated that oil giant BP “bought and supplied military equipment to a Colombian army brigade” to police its Ocensa Pipeline, a 500-mile-long tube which at that time exported oil to the United States. That brigade had “been implicated in two massacres by rightwing death squads under its control during the civil war” in Colombia and was said to deploy psychological warfare (PSYOPs) and counterinsurgency techniques in the attempt to win over general public support for constructing the project and to marginalize “subversives.”

DSL‘s tactics received criticism from the human rights advocacy group Amnesty International. Furthermore, a United Nations Special Rapporteur on the question of the use of mercenaries also expressed concern about DSL in a letter published in October 1998 for the company’s alleged use of intimidation and torture in Colombia.

“Spies for Hire” Under Investigation

G4S is not the only private contractor identified on the ground in or around the Sacred Stone Camp related to the Dakota Access pipeline protests.

The show “Democracy Now!” revealed that a man who is employed by the firm Torchlight USA, LLC, but is appearing as a freelancer, also showed up in North Dakota. And court documents from the ongoing case in the U.S. District Court for the District of Columbia pitting the Standing Rock Sioux Tribe against the U.S. Army Corps of Engineers reveal that another firm, 10-Code LLC — founded and run by a former Bismarck Police Department detective named Paul Olson — also has entered the fold.

It’s a phenomenon author and journalist Tim Shorrock calls “Spies for Hire” in his 2009 book by the same name, a tome dedicated to chronicling the outsourcing of U.S. intelligence.

“G4S and other companies like it have one motive only: profit. Its work for governments and energy corporations — particularly at the pipeline this week — shows it has no respect for ordinary people or human rights,” Shorrock told DeSmog. “Whoever hires them should be investigated for malfeasance, because their shoddy record in security is a mile long.”

In that vein, the North Dakota Private Investigation and Security Board announced that it has opened up an investigation into the private security firms deployed to patrol the pipeline protests led by the Standing Rock Sioux and whether those firms were even licensed to work in the state. In addition, a local county sheriff’s office has begun a similar investigation with the North Dakota Bureau of Criminal Investigations, exploring the Labor Day weekend clash between security firms and protesters at a DAPL site.

The North Dakota Private Investigation and Security Board said it could not comment on which companies have fallen under the purview of its ongoing investigation.