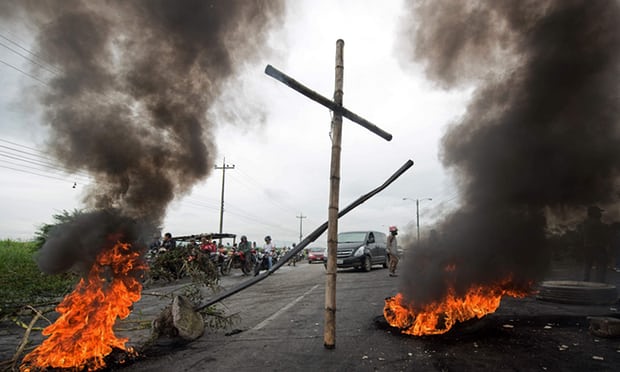 Above Photo:  Supporters of Salvador Nasralla set fire to a barricade to block the passage between San Pedro Sula and El Progreso on Monday. Photograph: Jordan Perdomo/AFP/Getty Images

Yesterday was a remarkable day in Honduras. The Cobras, an elite police force, and basic level police officers of the National Police would no longer Announced They obey the government’s order to repress the protests and mobilizations taking place all across Honduras. ‘We are the people and we can not be killing our own people to protect the interests of external persons,’ Announced one of the Cobras. Another Cobra Stated, ‘our job is to give peace and security to the Honduran people, not repress them.’ This incredible turn of events comes after violent repression of the massive protests, Including Numerous murders of protesters by the Military Police and the Armed Forces.

In a tremendous show of integrity, the Cobras and police officers abandoned the protests Where They Had Been sent to repress and returned to Their barracks. A huge crowd Gathered outside the Cobras in Tegucigalpa, sharing food and water With the police officers arriving there, and celebrating Those Who Have the dignity to refuse to attack Their Own People for demanding basic tenet of democracy to be respected: the popular vote.

People in Honduras continue in the streets demanding an end to the fraud and the dictatorship of Juan Orlando Hernandez, Who has consolidated power Throughout the past 8 years following the SOA-graduate led 2009 coup, and ran for re-election DESPITE the Constitutional prohibition against re-election. Last night, eleven people Throughout the country again chanted ‘Out JOH’ (get out JOH) and banged pots and pans Throughout the night in a show of resistance to the curfew and suspension of Constitutional Guarantees. Hernandez, Whose regime Continues to be Financed by the United States DESPITE the violent crackdown on protesters massively, is trying desperately to Maintain His grip on power DESPITE Widespread popular rejection.

The Platform of People and Social Movements of Honduras is now demanding the immediate resignation of Juan Orlando Hernandez and Thousands upon Thousands continue in the streets today. The momentum is Cleary on the side of the Honduran people and the fraud is becoming too obvious to deny. As Hernandez tries to Maintain power, the US will continue propping him up? Or will it finally acknowledge how corrupt and repressive His regime is and let the Honduran people decided to Their Own Future?

Take Action in Solidarity with the people of Honduras TODAY. The United States has Financed and propped up the regime for Juan Orlando Hernandez far too long and bears responsibility for the murders of Those Who are simply demanding the official election results That Reflect how people whos Voted. Here are ways to take action Several:

1. Call the State Department Honduras Desk at202-647-3505TODAY and demand the State Department publicly denounce fraud and repression in Honduras and the US request not Recognize That the outcome of the elections Until there is a transparent process That Meets the Demands of the Opposition Alliance. (* Note: This is the number published in the Directory of the Department of State If the operator tells you That it is a wrong number, please ask the operator to share the Honduras Desk’s phone number.) Sample message: ‘My name is ______ , and I am calling to urging the State Department to speak out against election fraud and violent repression in Honduras. I am extremely upset people protesting against fraud That Have Been Murdered by the US Financed security forces and urged the State Department to suspend US aid to Honduras as well as condemn the violence by state security forces and the massive Irregularities in the election results. The US Should not Recognize the outcome of the elections UNLESS there is a transparent process That satisfies the Demands of the Opposition Alliance with regards to transparency and review of votes, especially in areas Where There Appears to be inflated vote turnout.

2. Tweet at the State Department or post on Their facebook page: Call on the US to denounce fraud and violent repression following the elections in Honduras, demand the immediate suspension of aid to Honduras, and demand accountability for the US financing of repression and murder in Honduras. Twitter: @StateDept, @WHAAsstSecty , @WHASpeaks , @USAmbHonduras. Facebook: @usdos

3. Organize or Attend to protest, action, or Vigil in Solidarity with the people of Honduras. Contact us for more ideas, or to connect with others in your area.

4. Finally, keep one-mailing and calling your Representative and Senators Urging them to support the suspension of US security aid to Honduras and to speak out against election fraud and repression by the US-financed security forces in Honduras. If your Representative has not done so Already, ask him / her to co-sponsor HR 1299, the Berta Caceres Human Rights in Honduras Act.

Honduran police have announced they will refuse to obey orders from the government of the incumbent president, Juan Orlando Hernández, and will remain in their barracks until a political crisis triggered by last Sunday’s contested presidential election has been resolved.

All national police – including elite US-trained units – in the capital, Tegucigalpa, would refuse to enforce a curfew ordered by the government after days of deadly violence triggered by allegations of electoral fraud, a spokesman said on Monday night.

“We want peace, and we will not follow government orders – we’re tired of this,” said the spokesman outside the national police headquarters.

“We aren’t with a political ideology. We can’t keep confronting people, and we don’t want to repress and violate the rights of the Honduran people.”

Crowds of anti-government protesters greeted the announcement with cheers and chanted: “The people united will never be defeated!”

Earlier a member of the Cobras anti-riot squad said: “This is not a strike, this not about salaries or money. It’s that we have family. We are tired. And our job is to give peace and security to the Honduran people, not repress them. We want all Hondurans to be safe.”

The announcement marked a dramatic twist in a week-long electoral debacle that has plunged the volatile country into its worst political crisis since a coup in 2009.

It came shortly after international observers called for Honduran voting authorities to carry out a recount, and the opposition candidate Salvador Nasralla again claimed victory in the election.

“I am the president-elect of Honduras, the president chosen by the people,” said Nasralla, who had a five-point lead when nearly 58% of the votes were counted in the first hours after the 26 November election. The count then slowed dramatically and his lead gradually disappeared as results dribbled out, leading the opposition to claim the election was being stolen by President Hernández.

Jorge Quiroga, the head of an Organisation of American States mission to Honduras said the OAS mission called for the recount, saying that irregularities, errors and systematic problems meant that they could not be certain of the result.

Early on Monday the government-controlled electoral commission found that Hernández was ahead of Nasralla, by 42.98% to 41.39%, after a recount of suspicious votes from just over 1,000 polling stations.

But the Supreme Electoral Commission, known as the TSE, refrained from declaring a winner and hinted that a wider recount could still be possible.

The string of irregularities has fuelled growing frustrations that have boiled over on to the streets and caused many people, including international observers, to question the legitimacy of TSE’s results.

Since Sunday, Hondurans have taken to the streets across the country, facing off against security forces clad in riot gear, who used teargas and water cannon. A night-time curfew imposed on Friday has curbed protests but not put an end to the violence.

A number of international journalists have been detained by security services including Jihan Hafiz who said she was being deported along with fellow reporters Ed Augustin and Reed Lindsay.

As negotiations continued on Monday, Nasralla’s Alliance party repeated calls for a recount of results from more than 5,000 polling stations that were tabulated after an alleged glitch in the TSE’s vote-counting system on Tuesday – and ultimately reversed a trend that indicated he would be the winner. Protestors accuse Hernández of manipulating votes and “stealing” the election.

“We a going to demand they review the votes from 5,179 stations. If not, we will protest,” spokesperson Rodolfo Pastor wrote to the Guardian.

On Monday the Inter-American Commission on Human Rights reported that they had received preliminary information on the deaths of 11 Hondurans during the protests that have gripped the streets since the election crisis began.

“We condemn all forms of repression [and] regret all the deaths. In a democracy it’s normal that people have the right to peacefully protest,” said Marisa Matías, head of the EU mission. The United States’ top official, Heide Fulton, congratulated the TSE for the “orderly count” of votes it conducted on Sunday night.

Hernández is a close ally of the United States and his government has closely cooperated with Washington on border security, counternarcotics operations and migration policy.

On Monday, Reuters reported that the US state department had certified that Honduras had been supporting human rights and fighting corruption. The certification would allow the Hernández government to receive millions in US security assistance. In 2017 the US provided $17.3m in security assistance to Honduras.